The Impact of Racism on Patient Safety 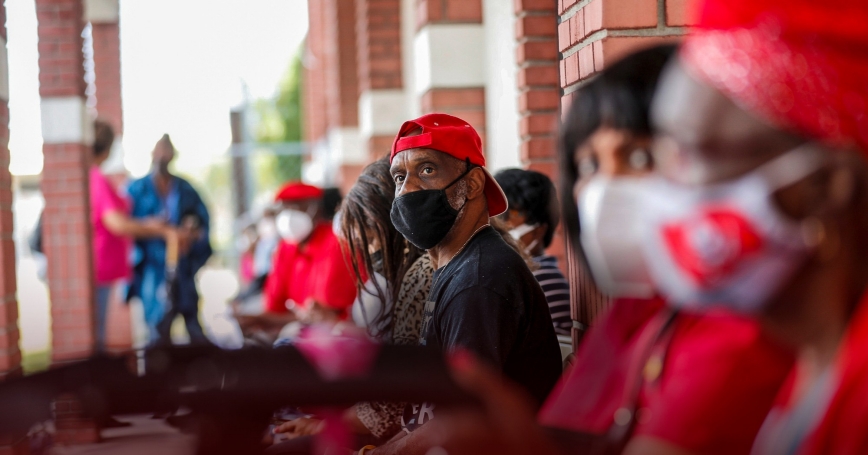 Members from historic African-American churches in the Tampa Bay Area wait in line to receive the Pfizer-BioNTech COVID-19 vaccine at the Greater Bethel Missionary Baptist Church in Tampa, Florida, February 14, 2021

The woman was desperate by the time she arrived in Lucy Schulson's exam room. Patches of itchy blisters had spread across her skin. Other doctors had assured her it was nothing, a skin infection, and had sent her home with creams to soothe the itch. They had not worked.

Schulson wasn't sure what it was, either. But she knew the woman needed to see a dermatologist immediately. She would later learn the woman, who was Black, had a rare autoimmune disorder that attacks the skin, “a pretty terrible thing to live with.” She suspected race may have played a role in the delayed diagnosis and treatment.

Schulson, an internist at Boston Medical Center and a physician policy researcher at RAND, had just finished a study of what the medical field calls “patient safety events.” The term can cover any number of medical harms, from bad drug interactions to surgical site infections to missed diagnoses for a persistent rash. The study found clear and consistent evidence that minoritized patients are at especially high risk. But the way the health care system tracks patient safety too often makes them and their experiences invisible.

Researchers used the adjective “minoritized” rather than “minority” to acknowledge societal power structures that have conferred minority status on certain populations and to emphasize that race and ethnicity are social constructs rather than biological.

“It became clear that even if we have the technology, and we have the science, and we have the medicine, that's not sufficient to address all these underlying structural issues that lead to the disparities we see,” Schulson said. “We need to start thinking differently about this, and that starts by naming the problem for what it is, which is racism.”

Schulson and her team read back through nearly 20 years of medical studies and interviewed more than a dozen top medical specialists. They found that Black patients suffer more surgical complications than White patients, even in the same hospital. Black patients also are more likely to experience harmful drug interactions, to go without needed pain medicine, and to die following coronary bypass surgery. Black, Hispanic, Asian, and Native Hawaiian or Pacific Islander patients have much higher rates of hospital-acquired infections.

Minoritized communities are more likely to breathe polluted air, to have substandard housing, and to live with other health-harming environmental hazards.

The researchers found no shortage of explanations for those disparities. Minoritized communities often lack easy access to top-quality hospitals. They are more likely to breathe polluted air, to have substandard housing, and to live with other health-harming environmental hazards. Black, Hispanic, and American Indian or Alaska Native people are less likely to have health insurance.

But few of the studies reached back any further to identify racism as a root cause of those inequities. The medical specialists the researchers interviewed—physicians, nurses, pharmacists, all of them prominent in their fields—were not so hesitant. They were almost unanimous in describing racism as a contributing factor in some or all patient safety events. “It impacts everything,” one said.

For example: Bed sores. A standard medical textbook might note that poor nutrition puts patients at higher risk of developing a bed sore. But it's another step to recognize that patients of color are more likely to live in formerly redlined neighborhoods where the nearest grocery store might be miles away. It's not by chance that they tend to have higher rates of bed sores. Health care providers who understand that could better anticipate and reduce the risk.

“When you shift your focus like that, and look at racism as the root cause of almost all health disparities that we see in this country, you can intervene earlier and more effectively,” Schulson said. “Redlining is a perfect example. It perpetuated food deserts, impacted social cohesion, had all these downstream effects on health care access and quality—and that leads, ultimately, to disparities in patient safety.”

For all its do-no-harm ethos, the health care system has too often compounded the problem. Diagnostic tests have been shown to delay treatment for people of color. Medical textbooks still show what rashes and skin infections look like on mostly White skin. In one small survey of medical residents, published in 2016, a quarter said they thought Black people have thicker skin than White people. The would-be doctors who endorsed that and other false beliefs were less likely to provide adequate pain treatment to a hypothetical Black patient for a broken ankle or a kidney stone.

In early December 2020, a Black woman named Susan Moore looked up from her hospital bed and pushed the record button on her phone. She was being treated for COVID, she was in relentless pain, and her White doctor had refused to give her the medicine she needed. “He made me feel like I was a drug addict,” she said in the video, which she posted on Facebook. In reality, she was a physician herself, whose Facebook posts explained that her pain was due in part to the “large mediastinal” masses a subsequent chest scan revealed.

“I was in so much pain from my neck,” she says in the video from her hospital bed. “I put forth, and I maintain, if I was White, I wouldn't have to go through that…. This is what happens.”

She was released from the hospital as her vital signs stabilized, then rehospitalized less than a day later when her temperature shot up and her blood pressure plummeted. She died less than three weeks after posting her video. An outside investigation concluded the care she received did not contribute to her death, but that she experienced cultural incompetence and a lack of empathy from those treating her.

The American health care system has spent decades trying to improve patient care and prevent needless suffering. But with few exceptions, researchers found, it still does not track patient safety events by race, ethnicity, or preferred language. And previous research, by Schulson and others, has shown that voluntary clinician reporting systems of patient safety events don't always capture the experiences of minoritized patients. That may be because patients are not comfortable speaking up—or because bias prevents some clinicians from hearing them when they do.

Hospitals and other health care providers need to develop better reporting systems that collect data on race and other demographics, the researchers concluded. That would allow them to identify disparities in their own care, and to address them. If all providers took that one step, the researchers wrote, they could start to develop best practices for reducing disparities, improving safety, and protecting patients who are at disproportionate risk of harm.

“The big thing is just getting the data and starting to think about this,” Schulson said. “It's hard to make recommendations beyond that because we don't even know how bad this issue is.”

This research, a RAND-MedStar collaborative project, was funded by the California Health Care Foundation.