Why So Many Military Women Think About Suicide

Veterans in America is a special limited-series podcast from RAND.

The suicide rate among women in the military has skyrocketed in the past half-dozen years—increasing at twice the pace of male service members, according to research by the RAND Corporation. And when compared to civilian women, those in the service are two to five times more likely to take their own lives.

Marine Corps veteran Taniki Richard was one of those women. She's now living with her husband and four kids in Chesapeake, Virginia—but back in 2011, she decided to end her life and intentionally wrapped her car around a light pole outside a Marine Corps base in North Carolina.

“When I woke up from the car crash, I was on the stretcher, and I said I need help,” Richard said. “I had two children at the time, and I was about to leave them behind because of something I was not ready to face myself.”

Among the many reasons for the dramatic rise in suicide among women in the military, there's one primary cause that stands out: sexual trauma, particularly incidences of harassment and rape while stationed overseas.

In Richard's case, sexual harassment and rape, she said, combined with combat stress to push her over the edge.

“Sexual trauma is a significant risk factor for suicide,” according to former RAND researcher Rajeev Ramchand, now with the Cohen Veterans Network. While at RAND, Ramchand's research was published in a series of studies over the past three years. “VA patients who screen positive for military sexual trauma have a higher risk of dying by suicide than those who don't.”

According to the VA, one in four women (PDF) in the service are victims of sexual trauma. Ramchand said that number likely is low because of the stigma and possible consequences associated with reporting military sexual trauma.

Antoinette Wallace, a National Guard veteran, said she was sexually assaulted by her superior officer during her 2005 active tour of duty in Iraq. The trauma of war was difficult and expected, she said—but she couldn't recover after being raped and assaulted by a fellow soldier.

“When you're in basic training they always tell you, you guys have each other's back, you can always count on your battle buddy,” Wallace said. “Yet the person who betrayed me the most was the one wearing the same uniform as me.”

Wallace has an energetic Brooklyn accent, her words come spilling out as if they can't get out of her mouth fast enough. She was a fun-loving and gregarious high school senior—but that carefree life changed on September 11th, 2001.

Her school windows on Staten Island looked across the water at the World Trade Center. She and her classmates heard the planes hit and watched the towers collapse. 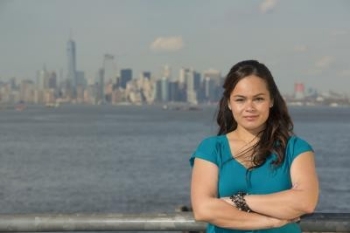 Antoinette Wallace near her former high school on Staten Island, where she and her classmates saw the Twin Towers fall, just across the Hudson River

“The first tower fell, and we were like oh my God,” she said. “And the second tower fell, and that broke us. We thought, this is just crazy, we can't even believe this is happening.”

Wallace described that moment as a game-changer.

“It changed everything in me,” she said. “I couldn't just stand back. And I felt so conflicted like what can I do? Well, I can join the military and at least do something to honor those whose lives were lost that day.”

With the full force of teenage certainty, she signed up with the National Guard.

For four years, she said, she enjoyed it. In particular, Wallace appreciated the routine and discipline the military provided. But in 2005, things changed. She was on active-duty tour in Iraq for Operation Iraqi Freedom 3. She and her unit were stationed near Tikrit, Saddam Hussein's hometown.

Wallace had worked out at the gym. Her boyfriend wasn't with her, and night was falling, so she was thankful when her trusted superior officer offered to walk her home. He forced her into an alleyway, she said, and raped her.

She didn't tell her friends, her boyfriend, or her commanding officers, she said, because the military is such a small town, especially overseas. Everybody knows everybody. And as a woman in the service, Wallace knew she'd be ostracized if she lodged a complaint—especially against her superior officer. So she remained silent. And to avoid him, she stopped going out.

“I just became numb. I became a shell of a person,” Wallace said. “People started to see me withdraw a little. I lost a lot a lot of weight. I just was falling apart.”

Wallace hoped and prayed everything would be OK once she got back to the United States. But when she got home, pain and grief swamped her.

“I remember coming home and just telling my parents I was really really tired,” she said. “I just wanted to sleep. I put up a blanket to block out the light, and I laid in bed for days and days.” 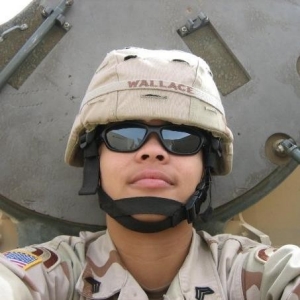 Antoinette Wallace standing inside a U.S. tank turret while on active National Guard duty in Iraq in 2005

Her friends and family knew something was wrong, but Wallace wouldn't tell anyone what happened.

“I was just trying to hide the fact that I was crying and I'm so depressed and felt so lost and lonely,” Wallace said. “I was kind of like a social butterfly before I left for Iraq. It was not like me to stay home and not answer my phone or not go out with my friends.”

She was stuck. Her military life felt hopeless; no one knew what was going on with her in civilian life. And she began trying to kill herself.

“My go-to was trying to self-numb—y'know, alcohol and prescription pills. A fistful of pills and if it worked, it worked. And if it didn't, I would just try again.”

A couple times, she said, she got close. It became routine for her mother to rush her, unconscious, to the ER.

“So many times it was at a point that... I would just wake up in the ER thinking, ‘What am I doing here?'” Wallace said. “I wouldn't even remember getting there.”

What turned it all around for her, Wallace said, is she asked her parents for help.

“Basically, I crawled into bed with them one night after work and just told them I just couldn't go on anymore... that I just didn't want to wake up the next day,” she said.

For two months, Wallace said, she spent every night sleeping between her parents until they could get her into an inpatient VA program for sexual trauma—specifically military sexual trauma, or MST as it's known in the service.

Researchers now identify MST as the biggest factor driving the spike in suicide risk for women veterans, according to Ramchand. Combat post-traumatic stress disorder and other factors contribute to military suicide among women, just as they contribute to suicide among men, he said. Sexual trauma is the one thing, Ramchand said, that can account for the faster-rising incidence of suicide among women in the service, compared to men.

To get at the root cause of why so many women in the service think about suicide, Ramchand's research team talked to responders on the Veterans Crisis hotline, to document why women were calling, why they were in crisis, if they might be receptive to services.

The solution to all of this is straightforward, he said. The research shows there's a tremendous opportunity to keep many women from killing themselves—by reducing the occurrence of military sexual assault in the first place.

“Ultimately, (that) will have an impact on female veteran suicide rates,” Ramchand said. 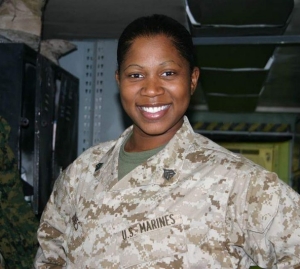 Taniki (Jones) Richard, while on active duty for the Marines in Al Asad, Iraq in 2007

In Richard's case, her sexual trauma was exacerbated by PTSD from combat stress. And one other thing, she said.

Richard singled out what she called “the blanket of ugliness” pervading military culture—an antagonistic bias against women in the military. She and other female Marines were sneered at and called names by male service members constantly, she said.

“It was daily,” she said. “You get hit with it every single day.”

Richard said she was ridiculed and belittled not only because she's a woman, but also because she is black.

“I would bring the situation to my male leaders, and they would automatically say, ‘What are you bitching about now?' And I would say, ‘Don't talk to me like that.'” Richard said. “And they would say, ‘You're belligerent, you're rude, and you're a black woman with an attitude, Sister Sister Shaniqua.'”

Between her combat trauma, the daily antagonism, and several incidents of sexual harassment and rape, Richard said she just broke.

“I would go in the bathroom, and I would cry, and I was so angry, but then I would get myself together and smile and act like nothing was happening,” Richard said. “I was living literally a double life.”

Unlike the more than 2,000 female veterans who commit suicide each year, Richard recovered. She fell in love, got married, is now raising four boys. But what she felt back then was so powerful, she said, she can still feel echoes of it.

And for military women who are facing what she faced, she has a message:

“If you are truly struggling with a darkness inside of you, a hopelessness, if you're struggling with that depression that nobody cares, and you feel the only way out is to end your life, there is hope for you,” she said.

“When you say, 'No more.' People will hear that cry in the night and will come to your aid. There are people who care about you, and you don't even have to know their first name.”

Richard takes a breath and collects herself.

“There was a time,” she said, “when I wore that mask, and I wore it until it wore me out. But there is hope for you. You can take off your mask. You don't have to suffer in silence. You can get help.” 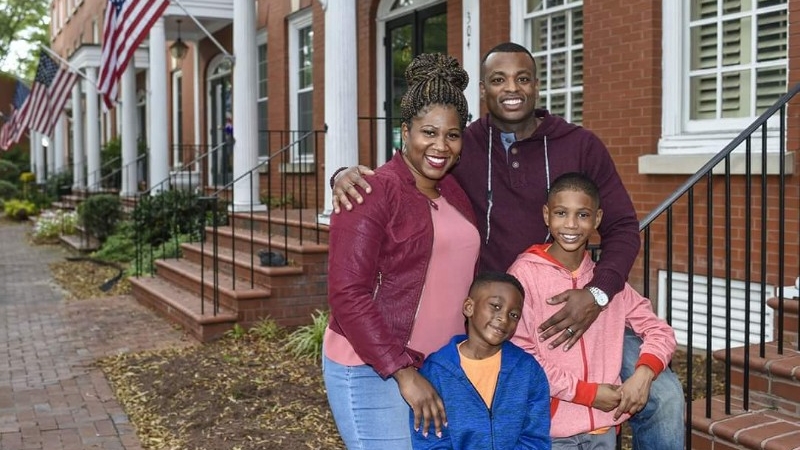 Taniki (Jones) Richard with her husband Brandon Richard and sons Jermaine and Terry in Chesapeake, Virginia

Photo courtesy of the Richard family