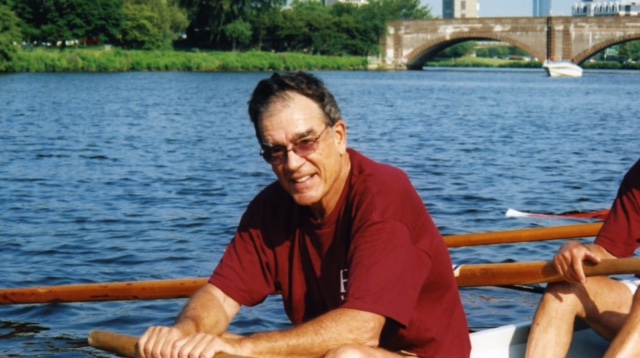 David K. Richards, an investment manager and philanthropist who funded unique research on what it would take to make an independent Palestinian state viable as well as on the costs of the continuing Israeli-Palestinian conflict, has died. He was 75.

Richards, who was a major donor to the RAND Corporation, died March 19 of amyotrophic lateral sclerosis (ALS) at his home in Santa Monica, his family announced.

His ties to RAND spanned more than a decade. Richards was a member of the RAND Board of Trustees from 2011 to 2014, served on the board of advisors of RAND Health from 2000 to 2014, and the advisory board of the organization's Center for Middle East Public Policy from 2003 to 2014.

“The David I knew was a true visionary, bold in his thinking, with an ability to express his thoughts clearly and convincingly,” said Michael Rich, president and chief executive officer of RAND. “It is impossible to overstate how much David meant to me and the many others he touched here.”

The first RAND study Richards underwrote — “Building a Successful Palestinian State” — focused on a single question: How can an independent Palestinian state, if created, be made successful? It came about after Richards contacted RAND, hoping to see an end to the Israeli-Palestine conflict.

When the report was released in 2005, it contained, “the most comprehensive recommendations ever made for the success of an independent Palestinian state,” a RAND release said at the time. The long list of suggested improvements included a landmark rail, highway and infrastructure link between the West Bank and Gaza intended to spur development in a new Palestinian state.

Under a headline that read “The Day After Peace: Designing Palestine,” the New York Times wrote about the pioneering research in 2005, saying that RAND had delivered a “gimlet-eyed survey of life in the West Bank and Gaza Strip that shows how far Palestinians are from viable statehood.” Two years later, the Middle East Journal called the study a “refreshingly upbeat 'how to' manual” that identified the main challenges to an independent Palestinian state.

A second and equally ambitious RAND study funded by Richards and his wife, on the costs of the enduring Israeli-Palestine conflict, is scheduled to be released this spring.

“David wasn't Jewish, he wasn't Palestinian, and the only goal he had in either study was to find a way to do something helpful for U.S. policy and the region,” said Charles Ries, vice president, International at RAND. “He really did have vision, really brave vision, and he drew on RAND to try to help leaders in the Middle East move it toward reality.”

David Kimball Richards was born in 1939 in Maine, the son of Robert Ladd Richards, M.D. and the former Janice Kimball, and grew up in Vermont. He attended Harvard College, receiving his bachelor's degree in English literature in 1961.

At Harvard, he rowed for three undefeated years on the varsity lightweight crew team, which he captained his senior year. His fellow athletes established the David K. Richards Small Boat Endowment Fund at Harvard to purchase training boats for up-and-coming rowers in perpetuity.

He earned a master's degree in 1963 in philosophy, politics and economics from Wadham College, Oxford University and a second master's degree in business administration from the Harvard Business School in 1965. Harvard and Wadham colleges were prominent among his philanthropic interests.

From 1973 to 1991, Richards worked as a fund manager for two noted investment firms, Capital Research and Management in Los Angeles, and PRIMECAP Management in Pasadena, California.

Richards also had a career-long dedication to advancing thinking about economic theory and developing solutions to economic and foreign policy problems. His support for the Joint Center for History and Economics at Harvard and Cambridge universities reflects these concerns. In addition, he was a founding member of the Global Partners Council of the Institute for New Economic Thinking.

In 1967, Richards married Carol A. Liebich. Their eldest son, Adam, is a physician and assistant professor of medicine at UCLA School of Medicine. Their other son, Peter, is an actor and director based in New York.

Richards is survived by his wife and children, grandchildren Theo and Ian, and a brother, Robert C. Richards.

Since 1979, David Richards had lived part of each year with his family on a farm in Stonington, Maine, and loved to get out on the surrounding water in the calm, early-morning hours and go rowing, his family said.

“He was the quintessential out-of-the-box thinker,” said Jeffrey Wasserman, vice president of RAND Health. “I think of him like Wayne Gretzky, skating not to where the puck is, but where it is going to be.”