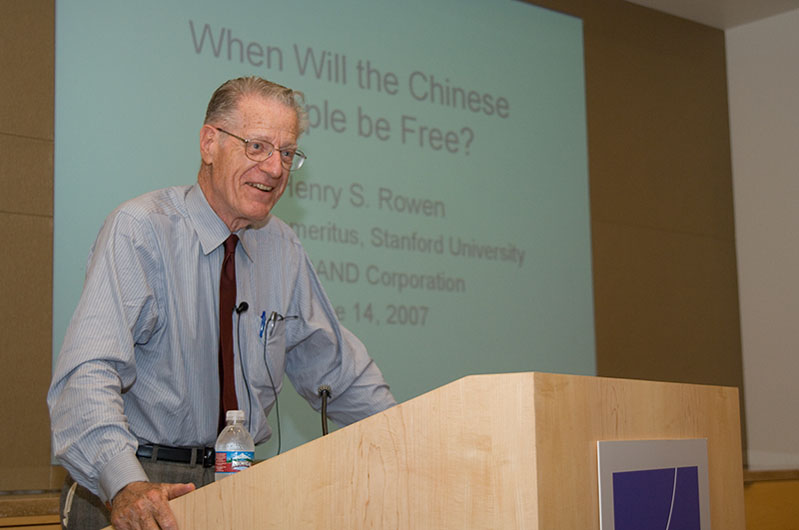 Henry “Harry” S. Rowen, who as the second president of the RAND Corporation oversaw the creation of its graduate school and extended RAND's reach into domestic policy in the 1970s, has died. He was 90.

Rowen died Nov. 12 after collapsing at Stanford University, where he had taught for many years. He was president of RAND from January 1967 to April 1972.

In 1970, he helped found what is now known as the Frederick S. Pardee RAND Graduate School. It is the nation's largest public policy doctorate program and the only such program based at an independent public policy research organization.

“RAND was already in the business of educating people through its research output,” Rowen said in 1993. “The idea was to make it more explicitly an educational institution. The graduate school was an experiment and a successful one.”

“Harry's service to RAND was invaluable, from his early years as an economist to his later roles as president and trustee, and as a pioneer of the graduate school,” said Michael D. Rich, RAND's president and chief executive officer. “As an eminent scholar and national advisor, Harry contributed leadership along with insight and exemplified the contribution that an analyst can make to public affairs. To every task, he brought a singular and truly vital asset: an enormous appetite for new ideas.”

It was during Rowen's RAND presidency that Robert McNamara launched the study of U.S. policies in Vietnam that became known as the Pentagon Papers. As Rowen recalled in a 2005 interview: “I'm not sure I'm the only one, but I'm one of the people who said we should really get a record of this thing which has turned out so badly. Some of this might be fleeting material, and we ought to collect it. I don't know whether this prompted McNamara to do it or not, but in due course a team was assembled.”

When the research expanded to include 23 separate studies, Rowen authorized a few RAND analysts to join the team. Among them was Daniel Ellsberg, who later secretly photocopied the project's top secret documents and released them to The New York Times. When Ellsberg was arrested for conspiracy, espionage and theft of government property, Rowen knew that RAND's reputation was in jeopardy, and he resigned. He said in a statement at that time, “Maintaining vitality in institutions and in people is brought about by change—RAND and I are no exception.”

Born in Boston on Oct. 11, 1925, Rowen earned a bachelor's degree in industrial management from MIT and a master's in economics from Oxford University. After a management internship at Barnsdall Oil Company, Rowen began his career as an economist at RAND, where he worked from 1950–1953, 1955–1960, and again as president from 1967–1972.

He wrote on a wide range of policy questions including nuclear strategy, international security, economic development, arms control, defense spending, the global economy and the critical role of energy. Later, he focused on China and the rise of Asia in high technologies.

Rowen believed that societies prevail by harnessing all of their resources, social as well as military. This meant, first and foremost, the application of systems analysis to social policy problems, although Rowen and staff agreed that systems analysis — in its existing, military-oriented form — would have to be substantially altered and improved if it were to deal meaningfully with the vast complexity of social problems like racism and hunger.

He contributed to the development in the 1950s of the pioneering Planning, Programming, and Budgeting System, a methodology that combined RAND's signature systems analysis with budgeting capabilities. The system was used originally by the Air Force, a development that led to the diffusion of RAND's methods into broader areas of American public policymaking.

During Rowen's presidency, RAND began what was then a controversial expansion of its research into domestic policy. He supported channeling more research energy into the social issues and welfare problems that came to the fore as the United States disengaged from Vietnam and refocused its resources on problems at home.

Today, RAND continues to be an important source of objective analysis on national security, terrorism and military policy, but about half of its research is in the public policy areas Rowen championed, such as health, public safety, energy, technology and insurance reform, Rich said.

In 1960, Rowen became a research associate at the Harvard Center for International Affairs. In 1961, he was appointed to the position of Deputy Assistant Secretary of Defense for International Security Affairs and was responsible first for European policy issues and later for the Asia-Pacific region. He served as assistant director of the U.S. Bureau of the Budget from 1965–1966.

The Stanford University Graduate School of Business offered Rowen a professorship in 1972; he returned to Stanford in the 1980s, 1990s and 2000s.

Rowen chaired the U.S. Intelligence Council from 1981 to 1983. At the same time, he was appointed as a senior research fellow at the Hoover Institution. He served as assistant secretary of defense for international security affairs in the U.S. Department of Defense from 1989–1991.

From 2002 to 2003, Rowen chaired the Department of Energy Task Force on the Future of Science Programs. In 2004, President George W. Bush appointed him to the Commission on the Intelligence Capabilities of the United States Regarding Weapons of Mass Destruction.

Rowen was a professor of public policy and management emeritus at Stanford University's Graduate School of Business, a senior fellow emeritus of the Walter H. Shorenstein Asia-Pacific Research Center at the Freeman Spogli Institute for International Studies at Stanford University, and a senior research fellow on war, revolution and peace at the Hoover Institution.

In 2004 and 2005, Rowen served on the Presidential Commission on the Intelligence of the United States Regarding Weapons of Mass Destruction. From 2001 to 2004, he served on the Secretary of Defense Policy Advisory Board.