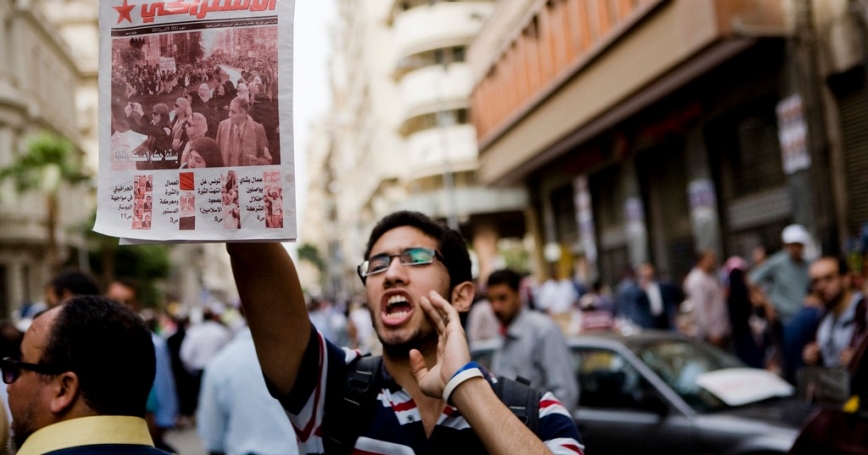 Egyptian man shouting and holding up a newspaper in Cairo on April 20, 2012

Over the last few weeks, the Egyptian presidential race has packed in a lifetime of political drama—and then some. First, in late March and early April, the Muslim Brotherhood broke its pledge not to run any candidates in the election and proceeded to register not one but two. Then, on April 6, Omar Suleiman, former President Hosni Mubarak's intelligence chief, announced that he was "a soldier that had never refused an order in his life" and would therefore reluctantly accept his supporters' supposed clamoring for him to enter the race. The dust from those bombshells hadn't even settled when Egypt's administrative court disqualified Suleiman; Khairat el-Shater, the Brotherhood's chief strategist and first-choice candidate; Hazem Salah Abu Ismail, a hard-line Salafist; and seven other contenders from the race.

If that were not enough, on April 15, the Supreme Council of the Armed Forces, the military-led interim government, broke a period of relative silence to suggest that it might delay the presidential election, scheduled to begin May 23 and 24, if the constitutional drafting committee could not finish Egypt's new charter before June 30, when the SCAF is due to hand over power to the newly elected government. Days later, the SCAF backtracked and confirmed that the election would go ahead as planned. But the damage was already done. With all the twists and turns, Egyptians are rightfully anxious about what lies ahead. Foreign commentators, too, have scrambled to parse how these developments will affect the presidential horse race. The consensus among them seems to be that Egypt's politics have been turned upside down and that the Islamists have been weakened.

In fact, although this month's events have somewhat reconfigured the race, they have not changed its nature. Shater was disqualified on account of his prior criminal record. Indeed, by his own admission, he had spent more than 12 years in prison on half a dozen different charges. To be sure, the convictions were handed down by military tribunals, which, most would concede, were politically motivated. Still, as disappointing as his disqualification is for his constituents, who view him as a Nelson Mandela-like figure because of the heavy price he paid for his opposition to the former regime, the Brotherhood does have a replacement. That man, Mohamed Mursi, is a professor by occupation and nature and was the head of the Brotherhood's parliamentary bloc from 2000 to 2005. Although Mursi lacks Shater's charisma and compelling backstory—he spent only a scant seven months in prison—most of Shater's acolytes will find him an acceptable second choice.

Then there is Suleiman, whom the court judged not to have enough signatures to run. The announcement emerged just as parliament was debating a bill that would have barred high-ranking Mubarak regime officials from elected office, an effort that was specifically aimed at stopping Suleiman's bid. In other words, Suleiman's final ouster was not terribly surprising (although it was sudden) and will not leave too large a hole in the field of candidates: Amr Moussa, the former foreign minister and head of the Arab League is still in the running and is a likely recipient of Suleiman's displaced voters. Like Suleiman, Moussa stands for secularism and a degree of continuity with the prior system.

The third candidate, Abu Ismail, was disqualified because his mother had become a naturalized U.S. citizen. (This is one twist the United States could probably do without. Although Washington would have been loath to see Abu Ismail become president, his dismissal is making already strained U.S.-Egyptian relations worse. In the wake of the court's disqualification, Abu Ismail's supporters papered Cairo with fliers reading, "Abu Ismail is truthful, the Americans are liars"—a reference to the fact that U.S. authorities apparently supplied evidence of his mother's citizenship to the court.) Of all the candidates to receive the boot, Abu Ismail is the most irreplaceable. The rare Salafist with crossover appeal, he had been rocketing up in the polls, running a strong second behind Moussa before the courts barred him from the race. The one remaining Salafist in the contest is Abdullah al-Ashaal, the nominee of one of Egypt's main Salafist parties, who lacks Abu Ismail's popularity.

Despite the dramatic shake-up, many commentators overexaggerated the extent to which the race itself had changed. The issue at stake is not whether Mursi can command the same support as Shater, or whether the departure of Abu Ismail improves the chances of the secular candidates. Just as before the disqualifications, the fundamental decision voters face is about the scope and nature of the change Egypt will undergo in the coming years. And there are still candidates representing almost every position on that spectrum.

For those who seek stability, a measure of continuity with the prior system, and a check on the power of the Muslim Brotherhood, there are several options. The choice before the disqualifications was among Suleiman, Ahmed Shafiq (a retired general and the last prime minister appointed under Mubarak), and Moussa. Moussa and Shafiq will naturally benefit from Suleiman's disqualification....

Jeff Martini is a Project Associate at the RAND Corporation. He recently returned from assignment in Egypt.

This commentary originally appeared on Foreign Affairs on April 19, 2012. Commentary gives RAND researchers a platform to convey insights based on their professional expertise and often on their peer-reviewed research and analysis.