Out of the Shadows, Into the Light: Why Americans Should Care About the Health of Contractors Deploying to Conflict Environments 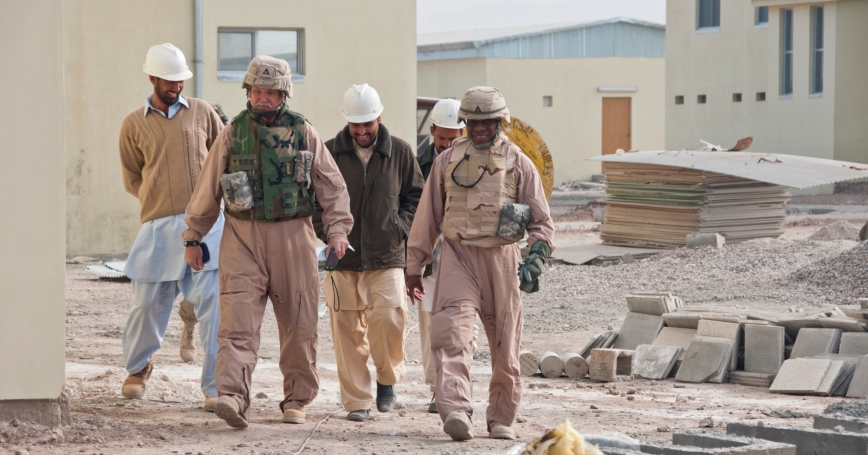 A recent RAND study found that 25 percent of a large sample of private contractors who had worked in a conflict area had probable post-traumatic stress disorder (PTSD). The proportion of these contractors with PTSD is higher than among civilians (6 percent have PTSD) or even U.S. service members (8–20 percent). Even more troubling, 23 percent of those who were deployed overseas at the time of the survey had probable PTSD — and most were not being treated for it. In contrast to the numerous mental health resources available to members of the U.S. military, very few (if any) resources are available to help private contractors struggling with mental health problems.

From an efficiency and cost-effectiveness standpoint, it is in the best interest of all involved — contractors, the companies employing them, contract funders, and the taxpaying public — to address these issues head-on and ensure that contractors receive the support and treatment they need to do their jobs effectively. This is true for several reasons:

1. The number of contractors deployed worldwide in support of U.S. military operations is significant — and unlikely to decrease anytime soon.

As of October 2013, the U.S. Department of Defense alone employed approximately 111,500 private contractor personnel (PDF) in the U.S. Central Command area of operation (which includes Iraq and Afghanistan). Their role could very well increase as U.S. and allied troops withdraw from Afghanistan. For reference, when U.S. and coalition troops pulled out of Iraq, the State Department sent in 5,500 contractors solely to provide diplomatic security. Contractors are also increasingly active in other areas of the globe, such as Africa.

2. Contractors are an important part of non-military activities in both conflict and non-conflict areas.

In addition to working for the Department of Defense and foreign militaries, contractors work for such diverse entities as the State Department, the U.S. Agency for International Development, non-governmental organizations, and private businesses. They perform a wide variety of services, including computing, construction and engineering, intelligence collection and assessment, security, and development work. Employing contractors for these critical reconstruction and stabilization tasks allows the military to focus on warfighting and greatly increases the capacity of the armed forces and diplomatic and development corps.

3. Contractors and the services they provide are not cheap.

According to the Commission on Wartime Contracting in Iraq and Afghanistan (PDF), the U.S. spent more than $192 billion on contracts and grants in Iraq and Afghanistan through the first two quarters of fiscal year 2011. Given the high cost and critical nature of the support they provide, contractors' health problems are not something that taxpayers can afford to take lightly.

It is in the national interest for the military to operate in top form. Likewise, it is important that contractors operating alongside military, diplomatic, and development forces are both mentally and physically healthy. Research has found that untreated mental health problems reduce productivity and attentiveness — setting the stage for decreased effectiveness and even the potential for harm.

To address the issue, governments and other contract funders could revise contract requirements to mandate better mental and physical health screening, mental health awareness training, and company-provided health support services. Companies themselves could take the initiative to set the standard for their industry, working with health professionals to develop screening and training tools that can be administered before, during, and after deployments. These efforts will require additional research to better identify the extent and nature of contractors' health issues and to translate some of the well-developed knowledge on military health problems to contractor populations.

Given their critical and growing role in supporting U.S. operations, contractors require adequate access to mental and physical health care. The U.S. government has made great strides in expanding these services to U.S. troops and reducing stigma and other roadblocks to receiving care. It is time to focus more attention on those who operate in the shadow of these military forces and stay behind to protect U.S. interests after the troops have returned home.

Molly Dunigan is a political scientist and Carrie Farmer is a policy researcher at the nonprofit, nonpartisan RAND Corporation.