CVS and the Effect of In-Store Tobacco Displays on Smokers 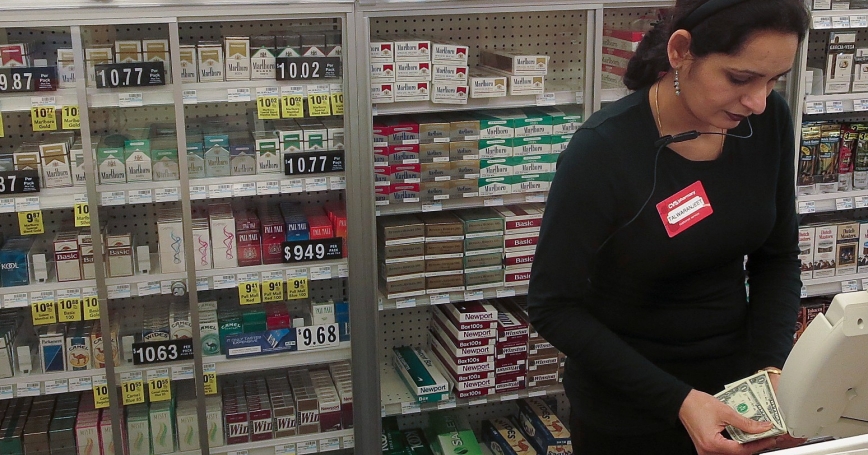 CVS Caremark will stop selling cigarettes and other tobacco products at its CVS/pharmacy stores beginning Oct. 1, the company announced yesterday.

“Every day, we are helping millions of patients manage chronic conditions like high blood pressure, high cholesterol, and diabetes,” he said. “All of these conditions are made worse from smoking.”

The presence of cigarette displays in stores does have an effect on a person's desire to smoke, according to RAND research.

A study of college students found that tobacco advertisements and displays near retail cash registers can significantly increase a customer's chances of smoking.

“The tobacco-rich media environment at the point of sale communicates and reinforces many positive messages about tobacco, and these exposures seem to be highly consequential,” according to the report.

In-store advertising has become an increasingly important component of tobacco marketing during the past few decades. Today, as much as 90 percent of cigarette advertising dollars are spent on point-of-sale marketing.

Approximately two-thirds of exposures to pro-smoking media messages occur at places where tobacco is sold, such as convenience stores, gas stations, or grocery stores.

Some pro-smoking messages are so effective that their influence can last for up to seven days, according to another RAND study.

“We were surprised by how long the influence of pro-smoking messages lasted,” said Steven Martino, a psychologist at RAND. “The results suggest that positive media messages about smoking are likely to influence behavior even if opportunities to smoke occur infrequently.”

CVS' announcement comes at a time when the company plans to double its number of retail clinics — a booming business that could grow bigger as more Americans become newly insured under the Affordable Care Act.

RAND research also offers insight into the larger financial consequences of smoking, which, for health care systems, can be as costly as obesity. A study of the health costs of obesity and smoking in South Africa found that former or current smokers incurred health care costs comparable with the moderately obese.