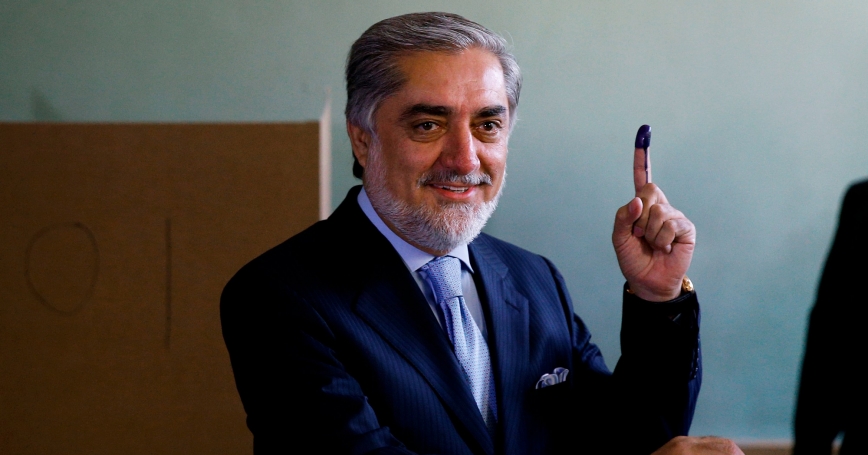 Afghan presidential candidate Abdullah Abdullah holds up his ink-stained finger as he casts his vote at a polling station in Kabul June 14, 2014

If Afghanistan's politics were a stock market, one could make easy money with an investment strategy consisting of only one word: “sell.” Bad news is the norm, and good news is often a lie. And that is why the nation's election to decide who should replace Hamid Karzai as president was so confusing: from the campaign through the first round of voting in early April, and right up to the runoff polls held June 15, the pessimists seemed to be proved wrong at every turn. The elections were the freest and fairest in Afghan history, and also the safest since the fall of the Taliban. A few days after polls closed, though, things started getting back to normal. Former Foreign Minister Abdullah Abdullah, the candidate who had entered the runoff with a clear lead, rejected the process before a single vote had been counted. To understand where Afghan politics is going, then, a reassessment of the past few months is in order.

Observers did have good reason to be upbeat before last week. The first round of the election was possibly the fairest in Afghan history — not a big claim, given the lack of all but symbolic contests before 2001, but an important one nonetheless. The 2004 election was essentially a coronation for Karzai rather than a truly open contest. The 2009 election had to be postponed twice due to security concerns, and allegations of fraud turned that vote into a sour embarrassment for both Karzai (who believed the charges were an American plot to discredit him) and Abdullah (who withdrew from the runoff under heavy international pressure). By contrast, this year's voting was held on schedule, and with far fewer security concerns than before. Judging by their track records of competence in high office and their moderate, inclusive campaigns, the two candidates who advanced to the runoff stage were probably the two best ones for Afghanistan, and for the world. That outcome had never been a given: initially, the field included 27 candidates, many of them corrupt warlords and frontmen. Within five weeks of the registration of candidates last September, an opaque commission had chopped the ballot down to a more manageable 11.

In the initial round of voting, Abdullah garnered 45 percent of the vote. His closest competitor, Ashraf Ghani, a former finance minister, won 32 percent. In the subsequent weeks, Abdullah rounded up enough support from his rivals to leave him very well placed for the final showdown. Three Pashtun also-rans were especially important in that respect: Zalmai Rassoul, who finished third, is a technocrat who served as foreign minister and national security adviser. He was widely seen as a stalking-horse for Karzai. Abdul Rasul Sayyaf, who came in fourth, is an accused war criminal, an ideological soul mate of Osama bin Laden, and a likely sponsor of the al Qaeda assassins who killed the legendary Afghan leader Ahmed Shah Massoud days before 9/11. Sayyaf has also been a close adviser to Karzai. Finally, Gul Agha Shirzai, who came in sixth, is one of the most notorious warlords of the 1990s, who transformed himself into one of the most effective (albeit epically corrupt) provincial governors in the new era; the Barakzai clan, which he heads, is perhaps the greatest rival to the Karzai family's Popalzai clan in both peoples' ancestral province of Kandahar.

The support of these thugs and frontmen mattered because it demonstrated that Abdullah could build a coalition extending far beyond his base of northern Tajiks. Given that Pashtuns represent a plurality of the population and have led nearly every Afghan government since the eighteenth century, winning over a critical mass of Pashtuns had always been Abdullah's greatest challenge. With the backing of his former Pashtun competitors, though, things were looking pretty good for Abdullah as Afghans returned to the polls. But the course of Afghan politics never does run smooth.

Last week, Abdullah withdrew from the process, claiming that vote-rigging in the second round rendered a fair outcome impossible. His allegations are credible enough to merit concern. Afghanistan has no history of clean elections: all contests prior to 2001 were effectively rigged (there were token opponents, but each result was a foregone conclusion), and all elections since then have been plagued by fraud, ballot-stuffing, and heavy-handed intimidation. In the 2009 election, more than a million ballots had to be discarded, forcing Karzai into a runoff against Abdullah and leaving both men highly mistrustful of the electoral system. In the first round of voting in 2014, there were reports of some ballot fraud, but the most troubling data point is the suspicious surge in Pashtun voters (nearly two million out of seven million total votes, by Abdullah's reckoning) between the first and second rounds. Given the election commissions' history of political manipulation, and given the lack of effective international monitoring in 2014, allegations of fraud are not far-fetched.

That doesn't necessarily mean that Ghani did anything wrong. Indeed, Ghani has a well-deserved reputation as the cleanest politician in Afghanistan. His tenure as the first finance minister of the post-Taliban regime provided him countless opportunities for venality, but he avoided the temptations for personal enrichment. He based his first campaign, in 2009, on fighting corruption and improving governance. But, when the approach netted him less than three percent of the vote, he threw himself into the task of mass-based campaign. This time around, he brought onto his ticket as vice president the notorious Uzbek warlord Abdul Rashid Dostom — a man Ghani had previously, and accurately, described as “a known killer.” But Dostom is no worse a killer than several of the warlords who now back Abdullah (Sayyaf and Shirzai, for example), or many ministers, governors, and other high officials of the Karzai administration.

At the same time, Ghani's reputation as Mr. Clean doesn't necessarily mean that the vote was fair. There are many power brokers in Afghanistan who are neutral toward Ghani but are most definitely opposed to Abdullah. This group includes many Pashtun warlords, who control government operations (including voting) in the parts of the country that delivered the suspiciously high Pashtun returns. These power brokers see Abdullah as the candidate of the Tajik-led Northern Alliance, and they may feel more threatened by him than by Ghani. This camp could even include Karzai; as president, and nominator of the members of the election panels, Karzai has greater control over voting and monitoring operations than any other figure in the country. Not only does Karzai personally blame Abdullah for besmirching his victory in 2009, he also desperately wants to maintain his own power and relevance after he leaves office. Under a Ghani administration, Karzai might well retain a significant amount of power: Ghani ran against Karzai in 2009, but was a trusted aide both before that campaign and after it. There is likely too much bad blood between the Abdullah and Karzai, however, for Karzai to have any role whatsoever in Abdullah government.

So what happens now? One possible pathway out of the morass may run through the United Nations. Abdullah has called for the UN to help adjudicate claims of fraud. Ghani agreed and, on Friday, so did Karzai — a big move since he has steadfastly rejected international involvement over the past five years. That's a good sign: regardless of which candidate garners the most votes, any president entering office through a process that much of the population deems as illegitimate would be hobbled from the outset. In such a situation, the threat of civil war, always present, starts to look like a matter of when rather than whether. But the UN has, as of now, expressed no desire to get in the middle of the mess: lacking any formal powers of enforcement, the international body is hardly a magic solution to the problems posed by warlords, corrupt power brokers, and Taliban intimidation.

There is not much that Western powers, including the United States, could do, either. The United States is fortunate in that both presidential candidates would be fine partners for future cooperation. But this is an Afghan election, and it will be decided by Afghans — as it should be. The UN and other international bodies can do little more than serve as facilitators. Any candidate perceived to have been placed in office by the United States or any other outside power would be viewed as puppet rather than a legitimate leader.

A good outcome in Afghanistan seems less likely now than it did a few weeks ago, but, believe it or not, there is still cause for guarded optimism: before this electoral season began, few observers would have guessed that the final showdown would be between a pair of level-headed pro-Western moderates rather than two foul, bloodstained warlords. Afghans, and all other players with an interest in peace and stability in the region, should be hoping that an election that got off to such a promising start does not end as yet another disappointment.

Jonah Blank is a senior political scientist at the RAND Corporation and author of Arrow of the Blue-Skinned God and Mullahs on the Mainframe.

This commentary originally appeared on Foreign Affairs on June 22, 2014. Commentary gives RAND researchers a platform to convey insights based on their professional expertise and often on their peer-reviewed research and analysis.