Why the U.S. Swaps Prisoners but Doesn't Pay Ransom 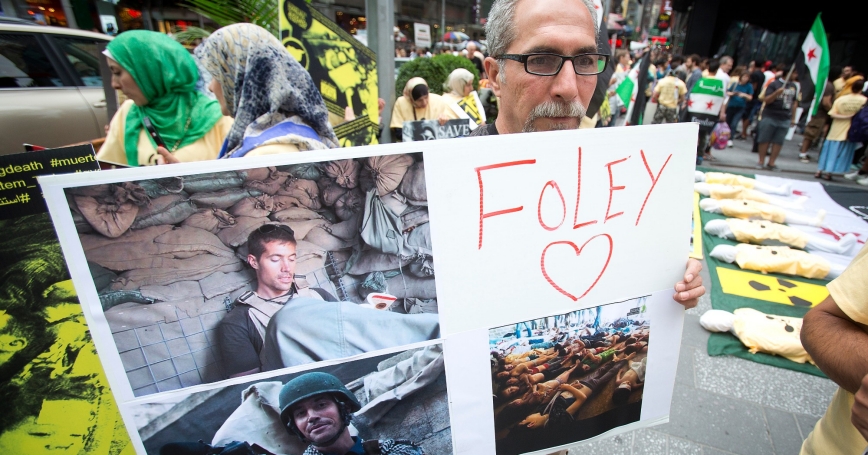 A man holds up a sign in memory of U.S. journalist James Foley during a protest against the Assad regime in Syria in New York City, August 22, 2014

The recent report that the United States refused to pay ransom to the kidnappers of journalist James Foley, only weeks before it released Taliban prisoners in exchange for Army Sgt. Bowe Bergdahl, has caused confusion about American policy. On the surface, the policy may seem inconsistent. Why will the United States release prisoners but not pay ransom?

While both cases centered on Americans held captive, there are key differences. Foley was a private citizen held hostage by terrorists, and the United States has made clear that it will not negotiate with terrorists, much less pay ransom for the return of hostages. Bergdahl, on the other hand, was a soldier being held by an enemy at war with the United States. Prisoner exchanges under such circumstances are not uncommon and do not help finance America's enemies.

The policy against negotiating with terrorist kidnappers has its origins in the early 1970s, when terrorists began seizing diplomats and other government officials to attract publicity, win the release of imprisoned comrades or demand cash payments. Initially, the United States took the position that the host country was responsible for the safety of diplomats accredited to it. Therefore, if American diplomats were kidnapped, it was up to these host countries to secure their release. The governments of Brazil, Guatemala, Haiti, Mexico, the Dominican Republic, and Colombia have all released prisoners, arranged for the payment of ransom or allowed terrorists to escape in order to secure the safe release of American diplomats.

But attitudes hardened as the tactic proliferated. The U.S. policy of refusing to negotiate with terrorist kidnappers was sealed in blood in 1973 when two U.S. diplomats were taken hostage by the terrorist group Black September in Khartoum, Sudan. The terrorists initially demanded the release of Palestinian prisoners held by Israel, members of the Baader-Meinhof terrorist gang held in Germany, and Sirhan Sirhan, the man who shot Senator Robert F. Kennedy (D-N.Y.).

The United States was willing to talk to the terrorists, but not release a convicted assassin. President Nixon made this clear when asked at a press conference specifically about the demand to release Sirhan. He responded: “As far as the United States as a government giving in to blackmail demands, we cannot do so and we will not do so.” News of the president's remarks was broadcast in Sudan, where the terrorists heard them. Hours later they murdered the two Americans along with a Belgian official. The response to a specific question in specific circumstances became general policy. It has been U.S. policy not to make concessions or negotiate with terrorists ever since.

The premise is that yielding to terrorist kidnappers only encourages more kidnapping. However, a RAND study in the 1970s showed little correlation between the negotiating policy and the occurrence or absence of further political kidnappings. The study found that, even when their demands were not met, terrorists derived benefits from kidnappings, including publicity, alarm, and throwing governments into crisis. Still, U.S. government officials insisted that terrorists were aware of and affected by the policy.

Hostage situations are political kryptonite that can threaten government survival. This is precisely why a number of European governments are willing to quietly pay cash ransoms and avoid debilitating crises. Many people believe that the inability of the Carter administration to rescue or negotiate the release of Americans taken hostage at the U.S. embassy in Tehran, Iran in 1979 contributed to his defeat in the 1980 presidential election. And the revelation in 1986 that the Reagan administration, in contravention of U.S. policy, had secretly sold arms to Iran in an effort to bring about the release of Americans held hostage by Iran's protégés in Lebanon, caused an embarrassing political scandal. Evasions aside, the policy stands.

U.S. policy does not prohibit private parties from paying ransom. In domestic cases, families routinely negotiate and pay ransoms with the assistance of the FBI, which uses information gained during ransom exchanges to help apprehend kidnapping suspects. And U.S. policy discourages but does not prohibit American families or corporations from paying ransom in kidnapping cases abroad. Whether these private actions contribute to the greater good is arguable, but banning them would expose families to prosecution for doing what they will desperately try to do anyway.

Paying large ransoms to terrorist kidnappers — whether the source of funds is public or private — finances further terrorist operations. The kidnappers of James Foley reportedly sought a ransom of $132 million, among other demands. That is the equivalent of several hundred thousand AK-47s at black market prices or more than 200 times what it cost al Qaeda to carry out the 9/11 attacks. One can only imagine the uproar if it were revealed that the United States had paid millions of dollars to the group it currently regards as the most serious global threat to U.S. national security.

The release of five Taliban leaders in return for the release of Bergdahl after he was taken hostage in Afghanistan is an entirely different matter that had nothing to do with U.S. policy on terrorist kidnappings.

Had the Taliban sought payment of a cash ransom in exchange for Bergdahl, the demand would have been dismissed out of hand. But though controversial, it is not uncommon for the United States to negotiate with enemies to secure the release of prisoners. There are ample precedents, including bringing back American prisoners of war from North Korea and Vietnam.

While prisoner swaps might reward U.S. enemies for capturing U.S. soldiers, they have historically been a necessary part of international conflicts. Just as important, prisoner swaps do not help finance those who seek to harm the United States, either on the battlefield or through terrorism. This is diplomacy. Often controversial, such negotiations often begin in secret, but they do not violate U.S. policy.

This commentary originally appeared on thehill.com on August 29, 2014.