A Season of Bedtime Challenges 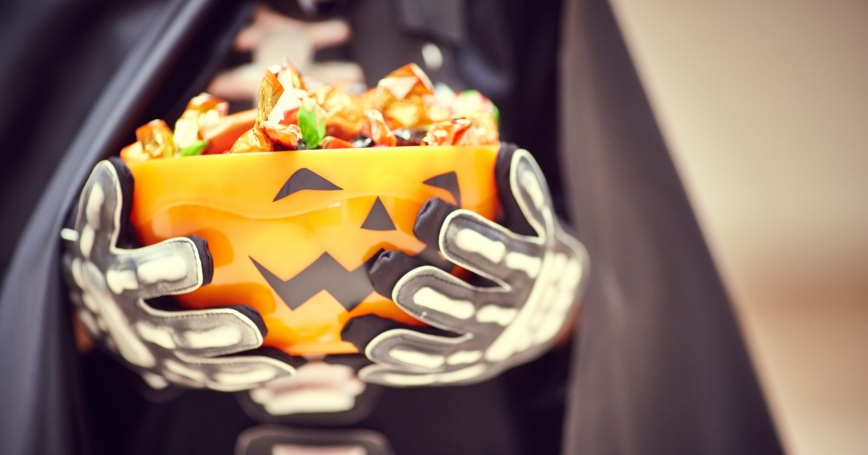 Fall is here. Along with the colorful leaves and nip in the air, kids are returning to the school year routine of early to bed, early to rise. But no sooner are the kids beginning to accept earlier bedtimes than Halloween rolls around. Weeks of anticipation about costumes and trick-or-treating culminate in bags full of sugary treats, some of them no doubt gobbled up late in the evening. If that alone doesn't wreak havoc on sleep schedules, throw in scary masks, monster costumes, cobwebs and witches. A lot of children will run into problems getting a good night's sleep.

Slumber won't necessarily return to normal when the holiday is over, either. In the wee hours of Nov. 2, scarcely more than a day after Halloween, the end to Daylight Saving Time arrives with its semi-annual challenge to everyone's circadian rhythm.

But because parents know it's coming, they can prepare by monitoring what the kids consume, by maintaining calm, consistent schedules and by slowly shifting bedtime over a few days to accommodate the new time settings. There may be significant individual differences in how individuals respond to the loads of sugar inside those trick-or-treat sacks, and whether it affects sleep, so it's wise to observe each child's response to sugar.

It seems intuitive that eating sugary snacks right before bedtime would disrupt sleep. Surprisingly, the scientific literature regarding the effects of sugar on sleep is lacking, though moderation, even on Halloween, is always recommended. Clinical psychologist and pediatric sleep specialist, Dr. Melisa Moore from CHOP Sleep Center, says “while there may not be research linking sugar and pediatric sleep problems, many parents report that their children are more hyper after consuming sugar. Because caffeine unquestionably interferes with sleep, parents should watch out for caffeine in hidden places, like dark chocolate. In fact, they may just want to sort through their child's Halloween stash and keep the dark chocolate for themselves.” Furthermore, studies do show a link between lack of sleep and later bedtime schedules (among adults) and greater consumption of calorie-dense, high-sugar, and high-fat foods. So maintaining healthy sleep schedules and adequate sleep duration is critical for the whole family to curb nighttime binging on those Halloween treats.

Parents would be well advised to look beyond the usual culprits of cookies, candies, and assorted snacks. Sodas are high not just in sugar, but also in sleep-robbing caffeine. And energy drinks, the most rapidly growing beverage market in the United States, have skyrocketed in popularity among adolescents and young adults. Younger kids also are starting to consume energy drinks, whose primary ingredient is caffeine. In addition to sugar and caffeine, these drinks can contain guarana, taurine and other herbal supplements with stimulating properties that can interfere with sleep. The U.S. Food and Drug Administration (FDA) regulates the amount of caffeine in sodas, which are classified as food. But energy drinks are categorized as dietary supplements, and are unregulated by the FDA. Whether children are getting caffeine from soda or even higher doses from energy drinks, they are at greater risk of sleep problems. And that can set off a vicious cycle: the energy drink leads to poor sleep which triggers a desire for more energy drinks to compensate for sleep loss.

What children see, hear, feel and fear—not just what they ingest—can disturb their sleep. Frightening movies and violent video games can lead to nightmares or sleep problems. A technique called Imagery Rehearsal Therapy is an evidence-based treatment that has been shown to help veterans with post-traumatic stress disorder and could help youngsters troubled by nightmares, as well. Part of a bedtime wind-down ritual for such a child might be to practice, say 10 to 15 minutes an evening, imagining a new dream to replace the nightmare. Ask children what they would you like to dream about. Encourage them to think of the happiest, most beautiful dream they can imagine. Do they want to dream about the beach? Help them add details about sand castles. Do they want to dream about softball? Help them imagine hitting a home run. The new dream can become a habit, replacing the old nightmare. And the nighttime ritual of discussing pleasant imagery while relaxing with your child can be soothing and enjoyable for both of you.

Bedtime rituals can also help youngsters adjust to a new time schedule. The good news for the beginning of a new school year is that the “fall back” cycle of daylight saving time is easier for most people to adjust to than the “spring forward” cycle. Just as east to west travel is easier on most people than the reverse—it's easier to stay up later than it is to go to bed earlier—gaining an hour is generally easier than losing an hour.

That doesn't mean that some children, accustomed to a 7:30 p.m. bedtime, won't be falling asleep at the dinner table at 6:30 p.m. for a few days after the clocks are set back.

Just like adjusting to jet lag, the best strategy is to shift gradually. A few days before daylight saving time hits on Nov. 2, start pushing kids' schedules back by about 15 minutes per day. If dinner is usually at 6:00, make it 6:15. If bedtime is 7:30, make it 7:45. By the school night of Nov. 3, the kids should feel that they're hitting the sack at about the proper time.

In a way, parents have lucked out this year. Halloween is on a Friday, and Daylight Saving Time ends at 2 a.m. the following Sunday morning. If the kids are well-rested and on a consistent schedule in advance, the weekend will give them a little more sleep-wake wiggle room before the school bell rings on Monday, Nov. 3.

Wendy Troxel is a clinical psychologist and behavioral scientist at the nonprofit, nonpartisan RAND Corporation and an adjunct assistant professor at the University of Pittsburgh.

This commentary originally appeared on The Huffington Post on October 28, 2014. Commentary gives RAND researchers a platform to convey insights based on their professional expertise and often on their peer-reviewed research and analysis.