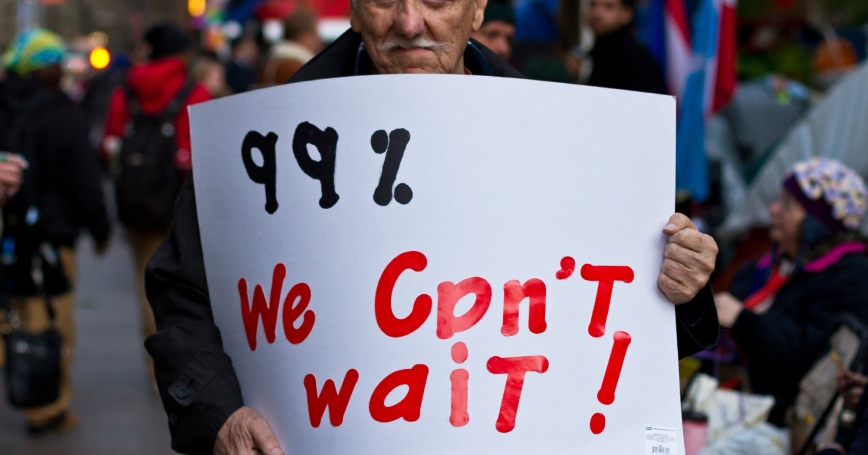 A man at an Occupy Wall Street protest in New York City, October 2011

President Obama can't run again, as he noted in the State of the Union, but he sought to use his address to set the tone for the 2016 campaign. His repeated references to “middle-class economics” were tactful code, speaking in front of a Republican-controlled Congress, for that perennial Democratic favorite, the inequality debate.

High and rising levels of inequality will doubtless resound in the politicking leading up to the presidential election. In fact, likely Republican contenders focused on it in their responses to the president's address. “Income inequality has worsened under this administration. And tonight, President Obama offers more of the same policies—policies that have allowed the poor to get poorer and the rich to get richer,” Sen. Rand Paul declared. Jeb Bush had the same reaction: “While the last eight years have been pretty good ones for top earners, they've been a lost decade for the rest of America.” And Sen. Ted Cruz said, “We're facing right now a divided America when it comes to the economy.”

Recent data show the Gini coefficient for (pre-tax) income distribution in the United States—the most-used measure of inequality—at its highest level since 1985: tenth out of 31 countries in the Organization for Economic Cooperation and Development. (Income distribution in China and most other less-developed countries is still more unequal than in the United States.)

Concerns about inequality and efforts to reverse or at least mitigate its rise derive partly from its causes—whether they're deemed legitimate, attributed to differences in productivity and “value-added,” or illegitimate, attributed instead to discrimination, favoritism, unfairness, or some other corruption—and partly from its effect on social stability. The two are intimately linked. To the extent inequality is seen as legitimate, its adverse effects on social harmony are minimized: People generally focus on enhancing their own living standards rather than comparing themselves with the “super-rich” 1 percent or “rich” 5 percent. But if inequality is deemed illegitimate, unfair, discriminatory, or due to corruption, its impact on social harmony is magnified. Countervailing interventions—protests, laws, and regulations—become unavoidable, as well as warranted.

Conservatives and liberals, unsurprisingly, differ over those interventions. Conservatives focus on supply-side measures, favoring economic growth by reforming and lowering taxes, lighter and smarter regulations, and a business-friendly environment. The accompanying rhetoric intones that “a rising tide lifts all boats”; critics assail this as “trickle-down economics,” expressing concerns about those who are left behind—-the boats left on the beach.

Neither side is devoid of merit—each suggests what's lacking in the other. But both views reflect wishful, rather than realistic, thinking. They fail to confront the reality of a daunting tradeoff between economic growth and income equality. Growth has been and increasingly is causally associated with less equality, greater equality with slower growth.

The ineluctable connection between growth and inequality lies in the crucial role of innovation in driving growth in technologically advanced economies. The enormity of rewards garnered by the innovators and their close associates creates a strong tilt toward increased inequality of income and wealth.

Economists refer to an economy's maximum output level as defining its “production-possibility frontier.” Expanding the frontier depends on one or more “game-changing” innovations. In the recent past, these have mainly been in information technology. In the future they may emerge from other technologies: biogenetic and stem-cell technology, nanotechnology, robotics, or something else. The effect on growth will likely be large, as will the ensuing disproportionate rewards for the innovators and their close associates—leading to greater inequality.

Evidence to support this proposition is both anecdotal and empirical. Consider Bill Gates/Steve Ballmer and Microsoft; Steve Jobs and Apple; Sergey Brin/Larry Page and Google; Jeff Bezos and Amazon; Larry Ellison and Oracle; Michael Bloomberg and Bloomberg L.P.; Mark Zuckerberg and Facebook—all of these innovators are in the IT domain—but also the Walton family and Walmart, major innovators in global-scaled procurement and retailing. These noteworthy innovators (except for the deceased Jobs) are all in Forbes's current list of the world's three-dozen richest billionaires. Their combined wealth is more than a half-trillion dollars; their accumulated wealth equals 3.5 percent of annual U.S. GDP. Their incomes place them comfortably among the “super-rich” 1 percent. Successful innovation spawns inequality.

The link between growth and inequality is also reflected in an accompanying change in the shares of national income represented by wages and profits. Wage income redounds principally to middle-income recipients (notwithstanding the skewing effect of CEO vs. worker pay mentioned earlier), while profits accrue to the owners of capital assets—notably the super-rich who are already upper-income. In the past decade-and-a-half of modest but fluctuating growth, the years of slower or negative growth (2007 to 2009) were accompanied by wage income amounting to 64-65 percent of total income, while the years of relatively higher growth exhibited wage shares reduced by 3 percent with equivalently increased profit shares. Although notably high-income recipients are included in the wage category, profit income is more concentrated among higher-income recipients than is wage income. Hence changes in which the profit share rises and the wage share falls signify increased inequality.

These data do not imply that innovators, as essential drivers of economic growth, are motivated only or even mainly by profit and income incentives. The venture capital industry, however, is laser-focused on these goals, and venture capital is vitally important in seeking, spotting, and financing successful innovation—more so now and in the future than ever before.

Notwithstanding the strong three-sided connections between growth, innovation, and inequality, there are social considerations that warrant measures to moderate the trend toward greater inequality. Herewith three suggestions toward this goal: The first relates directly to the trade-off between growth and equality, while the second and third relate to the separate issue of the huge disparity between CEO and worker pay in the United States compared with other countries.

Needless to say, these and other possible suggestions are easier to list than to implement. While implementation costs would not be negligible, they would be small relative to the gains made. There's a difficult trade-off between equality and the growth that comes from successful innovation. But one doesn't have to overwhelm the other.

This commentary originally appeared on The Weekly Standard on January 30, 2015. Commentary gives RAND researchers a platform to convey insights based on their professional expertise and often on their peer-reviewed research and analysis.