How Durable Is the China-Russia 'Friendship?' 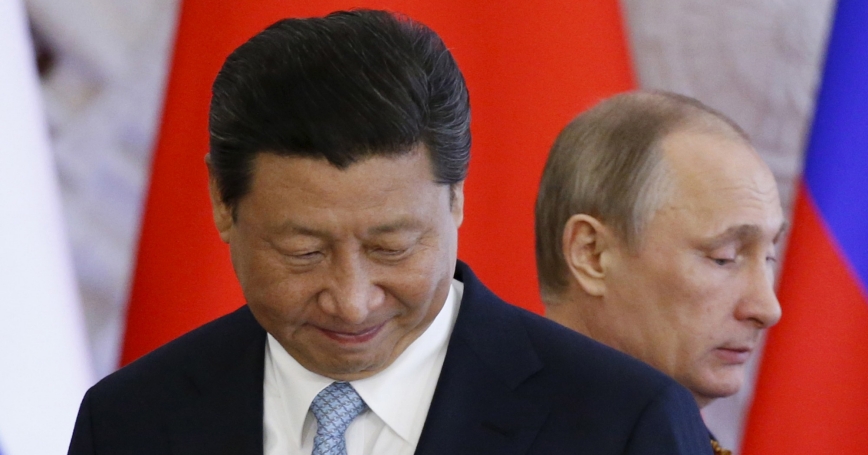 This week's joint naval exercise between Russia and China in the Black and Mediterranean Seas, along with President Xi Jinping's visit to Moscow last week, highlight the growing ties between Eurasia's two great powers. Though they share key economic interests and oppose what they claim to be a U.S.-dominated world order, the two nations' relationship over time promises to be uneven and tense.

One crucial source of discord is that China is a rising power and Russia is not. Moscow may not be willing to accept a junior partnership with China, nor is China likely to treat Russia with the respect Moscow would assume as its right.

There is no doubt, however, that Sino-Russian ties are growing. Trade between the two countries is about $100 billion a year (about one-tenth of Russia's trade with the world, and one-fortieth of China's). As part of China's Silk Road initiative that Xi touted last week during his meeting with Russian President Vladimir Putin, China may invest in Russian infrastructure that could improve transport of Chinese goods across Russia to Europe and the Middle East. Moscow and Beijing have also agreed to pursue two huge projects that would bring Siberian gas to China, which would enable Beijing to supplant Europe as Russia's largest natural-gas buyer.

But there are uncertainties: The projects will be costly, China is driving a hard bargain as Russia loses gas-market share in Europe and China sees Russia as a risky investment. Moscow no longer expects that Chinese financing will replace Western capital markets, which Russia has less access to since sanctions were imposed because of Russian-supported armed intervention in Ukraine.

Fearful of reverse engineering, Russia had been reluctant to sell advanced military technology to China. Now in tighter straits, Moscow has agreed to offer its most advanced air-defense system. The S-400 would enable China to strike targets over Taiwan and even key parts of India.

China and Russia are sponsoring new regional institutions that could help or hurt their future ties. The Chinese-led Shanghai Cooperation Organization seeks to counter terrorism, extremism and separatism, mainly across Central Asia. All its members, including Russia, fear infiltration of extremist fighters from Afghanistan and the Middle East.

The Russian-led Eurasian Economic Union builds on a prior customs union and binds Armenia, Belarus, Kazakhstan and Russia. The group's high external-tariff walls will concern China. With more Chinese industry moving to the interior, overland exports across the Eurasian union will become more important. The China-led Asian Infrastructure Investment Bank is a major attraction in Eurasia, and as a founding member, Russia will hope for major financing.

Beijing and Moscow are also linked by a commitment to authoritarian political systems, backed by increasingly shrill nationalist rhetoric. Putin and Xi are unhappy with Washington's championing of more open political systems. This was reflected in Beijing's angry reaction to student demonstrations in Hong Kong, and in Moscow's claim that outside powers have manipulated Ukrainian politics to foster hostility toward Russia.

Despite their shared interests, long-term prospects for cooperation between Beijing and Moscow are less promising, as a quick look at history reveals. During the three decades of Sino-Soviet rift, from the mid-1950s to the late 1980s, ideological, political and leadership differences threatened serious hostilities. About 30 years ago, Soviet President Mikhail Gorbachev and Chinese leader Deng Xiaoping had the shared wisdom to reverse those earlier trends.

But Russia's diminished economic prospects weaken its ability to deal with China on an equal plane. China's economy is more than four times larger than Russia's, and the gap continues to widen. The collapse of energy prices, Western sanctions and statist control severely burden Russia's economy.

Population trends in Russia's far east also bode poorly for stable relations with China. Beijing long insisted that its border with Russia was unfairly delineated because of “unequal treaties” from the 19th century and earlier. The population inequity is evident in the presence of a few million Chinese “guest workers” in Russia's far east, backed by a population of hundreds of millions more in the northeast of China. Compare those numbers to the roughly six million Russians on Moscow's side of the border.

China and Russia face a “middle-income trap.” To escape it, their economies must rely more on innovation and higher productivity and less on natural resources and inexpensive labor. If one or the other is unable to accommodate rising popular hopes that accompany higher income levels, the resulting unrest could spill across their border.

Both China and Russia are entering into less stable periods in dealing with their other neighbors. Putin has used force against Ukraine and Georgia, and is seeking to intimidate Europeans around the Baltic Sea. China is pushing territorial claims in the East and South China Seas. These moves are causing a reinvigoration of the North Atlantic Treaty Organization and are leading most of Asia to seek added U.S. military support.

Russia and China will seek to avoid impinging on each other's strategic priorities, but there are risks. Beijing sees little benefit in injecting itself into the Ukraine conflict, though Russia's actions contradict China's self-interest in the inviolability of internationally recognized borders and noninterference in internal affairs. For China, these are pillars that underpin Beijing's stances on Tibet, Taiwan and the Chinese region of Xinjiang. They are also the basis of the new nationalism that Xi is building under his “China Dream” rubric. Russia has fewer interests in the East and South China Seas and will give China a bye there.

The West has no interest in fueling enmity between China and Russia. Expanded energy ties will diversify global sources of supply, and cooperative trade arrangements will boost economic opportunity. At the same time, the West has a strong interest in China and Russia not coercing smaller neighbors. Russian pressure on Ukraine and Chinese in the East and South China Seas are spurring the West to strengthen defenses and intensify diplomacy to avert conflict.

The United States has long sought constructive ties with China and Russia, despite their many differences. This should continue, even as Washington and its allies and friends take steps to resist coercion. America has an interest in a strong NATO and in being an Asian-Pacific power with a web of close bilateral and multilateral links, including the Trans-Pacific Partnership, a major trade deal now in final negotiation.

If Russia cannot find new sources of economic growth, it will lose its claim as a great power. Through pragmatism, especially in energy and trade, China and Russia have options to forge an essentially cooperative relationship. At the same time, limits to their partnership could grow over time given the two nations' differing trajectories and historical grievances.

Moscow and Beijing have key decisions to make. Anti-U.S. posturing does not help either nation achieve its most important national goals.

This commentary originally appeared on Reuters, The Great Debate blog on May 13, 2015. Commentary gives RAND researchers a platform to convey insights based on their professional expertise and often on their peer-reviewed research and analysis.