Military Security Contractors Get PTSD, Too 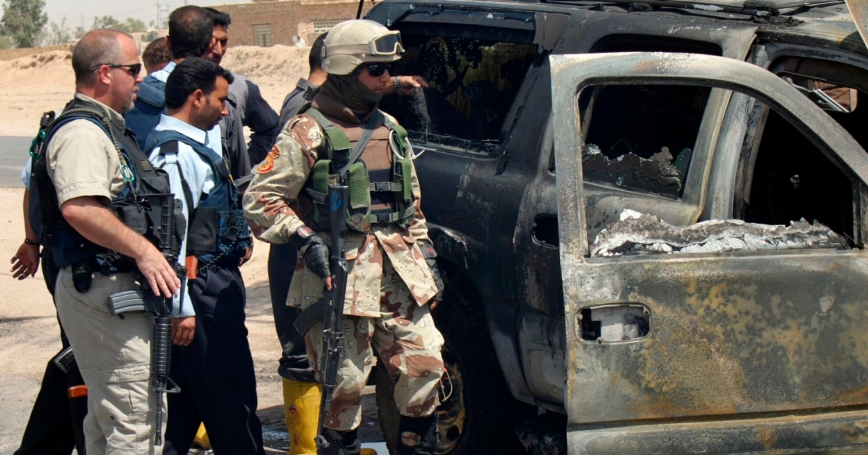 A private security contractor and soldiers look at a destroyed vehicle after an attack near Najaf, Iraq, May 18, 2006

In wake of the Nisoor massacre, we need solutions to trauma before it manifests in violence.

In September 2007, a convoy of armored vehicles carrying private security contractors employed by the firm then known as Blackwater USA approached a large traffic circle in Baghdad. Minutes later, 17 Iraqi civilians in that square were dead, and 24 others had been wounded.

The sentencing in April of four Blackwater guards in the attack — which included the slaying of a nine-year-old Iraqi boy and a young mother — has focused new attention on what can happen when armed contractors encounter civilian populations amid the haze of conflict. But by the time the guards confronted the crowd in Nisoor Square, and the bullets started flying, it may already have been too late to avert the tragedy.

Long before being deployed to war zones or other theaters of conflict, private military contractors need advanced training and careful vetting to make sure they are prepared for the stresses that may lie ahead. While promising efforts are underway to standardize vetting and training practices across some parts of the private security industry, present practices vary substantially from company to company.

Meanwhile, largely absent from the conversation are the parallel issues of contractor mental health and deployment-related stress.

In our 2013 RAND study of over 600 international private contractors operating in theaters of conflict between 2011 and 2013, we found that an astounding 25 percent screened positive for post-traumatic stress disorder — a noticeably higher rate than in the civilian population (6 percent) or among U.S. service members (8 percent to 20 percent). And, even more troubling, many of those who screened positive for PTSD were actively deployed in theaters of conflict when they completed the survey. The vast majority of contractors with probable mental health problems were not receiving treatment and said they were afraid to report the issue to their supervisors or company officials for fear of appearing weak or losing their jobs.

While no evidence has been presented to link the convicted Blackwater contractors to any verifiable deployment-related stress condition, it is not infeasible to think that such conditions — if left untreated — could contribute to similar violence in the future. While overall rates are low, studies have found that PTSD is associated with an increased risk of violence. Other research has found a relationship between PTSD and decreased occupational functioning, which can pose substantial operational risks in war zones when peak performance is required.

This is not to suggest that private military contractors suffering from deployment-related stress conditions should lose their jobs. Rather, we want to emphasize that evidence-based treatments exist for PTSD and other mental health conditions — but only for those who actually seek mental health care. Effectively addressing this problem will require the cooperation of the companies employing contractors and their government and non-governmental clients to promote better screening — before, during and after deployment — of contractor mental health. Employers also should make mental health services available to contractors, and work to eliminate the perceived stigma associated with accessing such services.

It's time to start thinking proactively about preventing unlawful contractor behavior instead of focusing on how to deal with it after the fact. Regulations and standards aimed at ensuring contractor accountability for crimes perpetrated in theaters of conflict certainly have a role to play in deterring unlawful behavior. But any well-rounded strategy for ensuring the safe and effective use of private contractors should also focus on selecting and training highly qualified candidates for these often dangerous positions — and recognizing and treating deployment-related mental health issues when they arise.

Molly Dunigan is a political scientist and Carrie Farmer is a policy researcher at the RAND Corporation.

This commentary originally appeared on USA Today on June 11, 2015. Commentary gives RAND researchers a platform to convey insights based on their professional expertise and often on their peer-reviewed research and analysis.