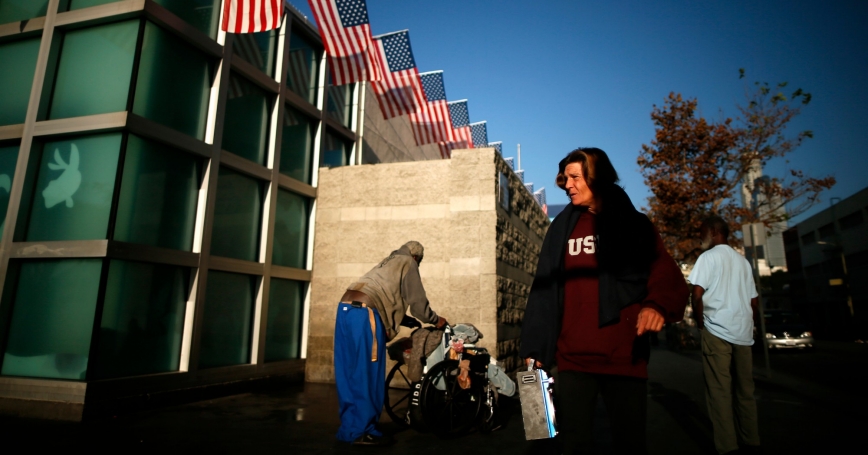 The Midnight Mission shelter on skid row before a Veterans Day observance for homeless veterans in Los Angeles, California

by Terri Tanielian and Rajeev Ramchand

Since U.S. military operations began in Iraq and Afghanistan, more than 2.7 million men and women have served or continue to serve there. Some have been deployed two, three, four or more times. More than 6,800 service members have sacrificed their lives in these conflicts. Untold others have forfeited their well-being. A vast majority of these surviving veterans will carry the wounds of war, both visible and invisible, with them long into their lives.

In the last few years, researchers have made great progress capturing the downstream consequences of coping with injuries sustained in the theater of war, but the emerging picture is shadowed in grays. Taken together, a series of recent findings and statistics presents a bleak portrait of the cost of modern war to service members, their families and their health care providers.

Of particular concern is a study just published in JAMA Psychiatry that showed, for the first time, that the risk for suicide increases once a person leaves active military service. Our recent review of the literature reveals unsettling findings from several other studies, signaling catastrophe for the nation's veterans and the systems that care for them if the problems identified are not addressed soon. For instance, individuals with post-traumatic stress disorder are at risk for early onset of hypertension, cardiovascular disease and dementia. And among service members previously deployed to Iraq and Afghanistan who are not seeking treatment, an estimated 5 to 20 percent have PTSD. This means that Department of Veterans Affairs and civilian medical systems will increasingly be called upon to care for two or more chronic illnesses in a single veteran patient.

As researchers, and as a society, we continue to learn from Vietnam veterans decades after they returned home from war. They are teaching us about the challenge of delayed-onset illnesses and increased demand for unexpected health-related services. As a group, veterans with PTSD or traumatic brain injury — or both — are more likely to struggle with marital and relationship issues and health problems like substance abuse. These health obstacles can affect workplace productivity, causing increased absenteeism and job loss, and lead to housing instability and homelessness.

More homeless veterans live in California than anywhere else in the country. And the overall veteran population is also first among the states, with about 2 million living there, according to the VA. Consequently, the state is home to about 1,840 nonprofit organizations that serve veterans and their families, according to data provided by the Center for a New American Security. This surge of — and reliance upon — nonprofit support for veterans points to the need for greater collaboration between agencies and organizations to ensure that neither veterans nor their families fall through the cracks.

Our research released in 2014 shows that military caregivers also face an increased psychological and social burden, with 40 percent of post-9/11 caregivers meeting symptom criteria for depression, compared to 10 percent of non-caregivers. There are an estimated 5.5 million military caregivers in the United States, and the country's overreliance on them poses a threat to the continuity of care for the newest veterans. It also calls into question the nation's ability to meet the long-term needs of post-9/11 veterans. Too many rely on parents who will age out of the role of caregiver, or they depend on their spouses in fragile young marriages that may be vulnerable to divorce.

The children of U.S. veterans also pay a price. RAND research conducted from 2009 to 2011 shows that the longer a parent is deployed the more it affects the emotional health and academic performance of a child. Other studies have highlighted the increased need for mental health care for children and spouses of veterans, care that our research shows must be rendered in communities that are unprepared to meet the growing demand.

In looking forward, researchers and policymakers also need to look back to lessons learned from Iraq and Afghanistan that might help the country deal with the human cost of future military operations. We have plenty of point-in-time snapshots that described how units or individuals were faring, but those were gathered relatively recently and fail to provide a complete picture.

What's missing is robust documentation of the experiences of service members between 2004 and 2006, when American casualties across operations in Iraq and Afghanistan were near their highest. Research that focused on active-duty service members' experiences when deployed, and subsequent post-deployment consequences, largely came after this phase of combat operations. Without a complete set of relevant data, we are unable to thoroughly study the needs of service members and their families over time. We can't truly answer crucial questions like how many deployments is too many and what is the appropriate ratio of time deployed and time spent back home?

As our Memorial Day remembrance of those who fight for our freedom fades from the headlines, let's not forget that the psychological and social consequences of war are ever present. Addressing them fully, and properly, will require a sustained, collective effort for decades to come as we continue to grapple with the long tail of war.

This commentary originally appeared on U.S. News & World Report on June 4, 2015. Commentary gives RAND researchers a platform to convey insights based on their professional expertise and often on their peer-reviewed research and analysis.