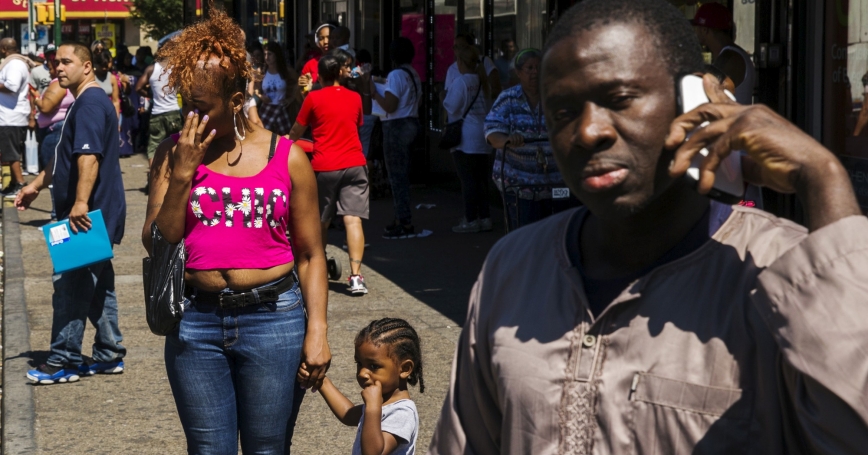 Pedestrians in a region of the South Bronx that has seen a deadly outbreak of Legionnaires' disease in New York August 7, 2015

While the largest outbreak of Legionnaires' disease in New York City's history appears to be on the wane, its deadly wake is a potent reminder of the importance of standard public health vigilance and practices.

Since July, more than 120 cases of Legionnaires' have been identified. A dozen people have died after being stricken by Legionnaires' disease, a form of pneumonia spread through airborne droplets. No new cases have been reported since early August.

The disease has been centered in the South Bronx, a corner of New York City's northernmost borough and “the poorest urban county” in the United States, according to Bronx Health Reach, a coalition of community-based organizations. With higher rates of smoking, obesity, uninsured adults, poor housing conditions and lack of access to physicians, the Bronx is also New York's unhealthiest county, according to a national survey of county health statistics, conducted by the Robert Wood Johnson Foundation. All of these factors can lead to health conditions such as asthma, heart disease and cancer and make people more vulnerable to Legionnaires' disease.

The dozen who died from Legionnaires' had pre-existing health conditions that made them more vulnerable to the severe form of infection.

Some have praised New York's response while others have criticized its health department for being slow to address the latest outbreak of Legionnaires' disease. When was the investigation triggered? When did investigators suspect cooling towers as the likely source of the outbreak?

Suspected outbreaks need to be recognized as quickly as possible so that epidemiological and laboratory investigations can be conducted in a timely manner and responsible measures taken to curtail an outbreak — before it can spiral out of control.

New York City's latest outbreak has been traced to a hotel cooling tower in the South Bronx. These towers are usually located on the rooftops of buildings; when contaminated with the Legionella bacteria, they emit a bacteria-laden mist that can cause Legionnaires' disease when inhaled. Most people exposed to the Legionella bacteria don't get ill, according to the Centers for Disease Control and Prevention. But no scientifically “safe” dose of Legionella has been established.

Controlling the growth of Legionella bacteria and spread of Legionnaires' presents a public health challenge. This is evident in the sheer number of cases in the United States — between 1,000 and 3,000 — reported to the CDC each year. These figures are likely on the low side because many cases are not diagnosed or reported.

Legionella bacteria are found in both natural and man-made water sources such as hot tubs, decorative fountains, large plumbing systems and cooling towers, and can survive in varied temperatures. As a result, it is likely impossible to eradicate Legionella colonization altogether in water systems.

There has been considerable debate among scientific experts about the best way to prevent or reduce Legionella contamination, including appropriate control measures and where, when, and how to monitor for the bacteria. Following the outbreak, the New York City Council recently passed a bill requiring registration of all cooling towers and periodic testing and inspection. That is an important step in the right direction. When Western Pennsylvania issued updated guidelines last year, aimed at controlling Legionella in the region, an emphasis was placed on primary prevention of the disease, including routine monitoring and management of Legionella in water systems in buildings that house or serve persons at high risk for the disease.

While this risk-management approach is advocated in other countries and by the World Health Organization, it is not yet embedded in U.S. policy. Some agencies, including the CDC, promote secondary prevention, which means waiting until a case of Legionnaires' disease has been reported before any testing or decontamination is done. However, this could change since the CDC and other agencies are currently updating their guidelines.

Our public health systems must promote responsible measures to prevent and control Legionella, whether risk-based primary prevention (including routine monitoring and maintenance of water systems), secondary prevention (to quickly recognize an outbreak, promptly investigate the source, and implement appropriate control measures) or both. It is not clear that either of those things happened in the Bronx.

Effective public health policies and practices can help inhibit Legionella growth, minimize the occurrence and impact of outbreaks and save lives.

Shoshana R. Shelton is a senior project associate and Melinda Moore is a public health physician and senior natural scientist at the nonprofit, nonpartisan RAND Corporation. They prepared the “Updated Guidelines for the Control of Legionella in Western Pennsylvania” released last fall.

This commentary originally appeared on U.S. News & World Report on August 20, 2015. Commentary gives RAND researchers a platform to convey insights based on their professional expertise and often on their peer-reviewed research and analysis.