Syrian Refugees: All You Need to Know 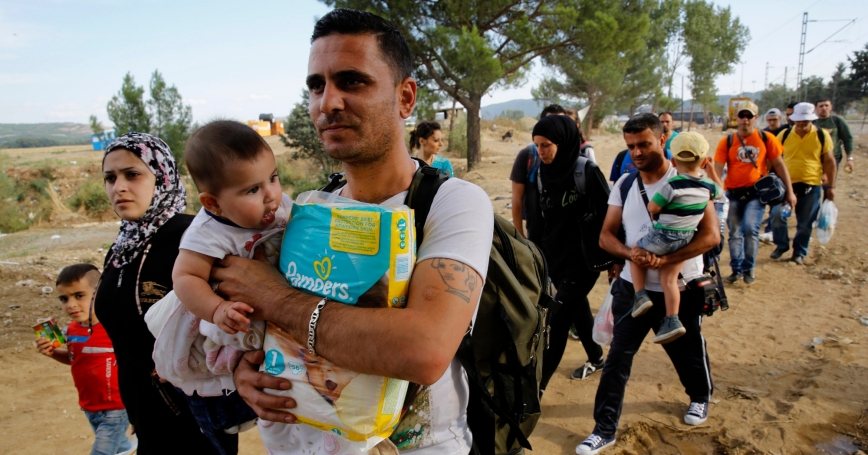 Syrian refugees walk towards a crossing point at Greece's border with Macedonia, September 8, 2015

RAND policy analyst Shelly Culbertson is just back from Beirut, where she interviewed refugees who have left their homeland behind and spoke with officials about how they are dealing with the biggest humanitarian crisis of our time.

She also spent time in Jordan and Turkey, investigating how to improve public services for refugees.

In this Q&A, Culbertson explains how the Syrian refugee crisis evolved and examines how the refugees—and the world—are coping.

Can you start by putting the Syrian refugee crisis in historical perspective?

Syria's civil war was set off by Arab Spring protests that began in 2011 and challenged the authoritarian regime of President Bashar Assad. A brutal government crackdown followed and violent Islamist groups gained power in many parts of the country. Now, about half of Syria's population—11 million people—have been displaced, either inside Syria or have taken refuge in other countries, mainly Turkey, Lebanon and Jordan.

Around the globe, 60 million people have been displaced because of war, conflict and persecution—the highest level of displacement in the history of the world, according to the United Nations High Commission for Refugees. Last summer, the number topped 50 million for the first time since World War II.

Is the Middle East able to accommodate more Syrian refugees?

Lebanon, Turkey, Jordan, the Kurdistan region of Iraq and Egypt have been remarkably generous. Together, they have taken 4 million Syrian refugees. In addition, Iraq also has 3.2 million people internally displaced by violence.

These countries have provided health care and education, but their domestic public services are overloaded. Water and sanitation systems are overwhelmed. There's not enough room in schools and hospitals. Rents have been driven up. And the addition of so many new people has caused social tensions.

Lebanon, Turkey and Jordan have taken so many refugees that it is changing their demographics. In Lebanon now, a quarter of the people are Syrians. In Jordan, 10 percent are Syrians. Similar ratios are reported in some parts of eastern Turkey.

These countries are overflowing with refugees, and it's hard to see them taking in many more. That's why we're seeing so many refugees fleeing to Europe.

What are living conditions like for refugees in Lebanon, Turkey and Jordan?

Unlike many other historical refugee crises, this one is largely urban. Over 80 percent of Syrian refugees are living in cities, towns or informal settlements, rather than in formally serviced camps. They are struggling to make ends meet. Many left Syria with some savings, but when their savings run out, some resort to negative coping mechanisms, such as child labor or early marriage. And even that is not always enough.

The camps that have been set up are not large enough to accommodate all of the refugees. Many refugees that I have spoken with want to live outside of the camps. One described them as “not fit for humans.” They do not like living in tents, with their movements confined, or with little privacy. People like to be independent, work for a living and live in decent housing.

How is the refugee crisis affecting Syria's children?

This is a lost generation of Syrian children, one that has witnessed extreme trauma. They are growing up without standard access to quality education, without adequate health care and living in tents or basements.

About half of Syrian refugee children do not attend school. Because adults cannot work, many children work in exploitative conditions when they should be in school. For example, 10 percent of Syrian children in Jordan are involved in child labor. Girls enter early marriage because their parents cannot afford to keep them.

A Syrian man I spoke with in August in Lebanon is the father of street children, meaning they spend their days hawking tissues on the streets. He said that people criticized him because his children work. But he can't work. His family lived in a tent on the beach that was destroyed by a storm. And he said that if his children did not peddle tissues, they would starve.

Could conditions be improved for refugees if donor support for humanitarian efforts increased?

Funding is hugely important, whether the money comes from traditional donors, such as the United States and European Union, or nontraditional donors such as the Gulf Arab countries. About a third of the $5.5 billion in aid sought for the Syrian refugees in 2015 has been funded so far.

Most of the money is used to meet basic needs such as food, shelter and sanitation but it also provides health care, education and protection. More money and sources of funding are needed. But new policies regarding how to use resources are needed as well.

One potential resource is the refugees themselves. For instance, Lebanon, Jordan and Turkey have taken in most of the 4 million Syrian refugees, but most are not allowed to work because these countries have high unemployment rates and are concerned about Syrians competing with citizens for jobs. Given the protracted nature of the crisis, those labor policies may need to be rethought.

We shouldn't forget that refugees can be self-reliant, if enabled. Syria was a middle-income country, with teachers, farmers, construction workers, doctors and business people. They have so much to contribute. Over and over, refugees have told me that they could meet many of their needs if they were allowed to work. Letting them do so would give them dignity, make them less dependent on insufficient aid, and reduce the amount of donor money needed.

How does the world's response to the refugee crisis need to change?

A river of refugees is flowing through Europe. Modern-day Europe was essentially founded creating stability and protection for minorities after two devastating world wars. So Europeans should have a natural empathy with—and feel responsibility for—displaced people. Jean-Claude Juncker, president of the European Union's executive arm, made that point on September 9 when he said, “Turning a blind eye to poor and helpless people, that is not Europe.”

Although several countries have opened their doors to the refugees, the EU needs to create a common policy so that more countries will follow. Germany has agreed to take 800,000 asylum seekers, France 20,000 and Britain another 20,000. More countries need to accept asylum seekers. (The United States has taken in only 1,500 Syrians, although it has given $574 million to Syrian refugee humanitarian efforts, making it the largest donor.)

However, the world can only absorb so many millions of Syrian refugees. The civil war in Syria demands a political solution facilitated by international leadership that will bring stability to Syria—and enable refugees to return to home.

Shelly Culbertson is a policy analyst at the nonprofit, nonpartisan RAND Corporation. The Fires of Spring, her book about trends shaping the Middle East after the Arab Spring, is scheduled to be published in March by St. Martin's Press.