The U.S. Military: Between a Rock and a Repulsive Place 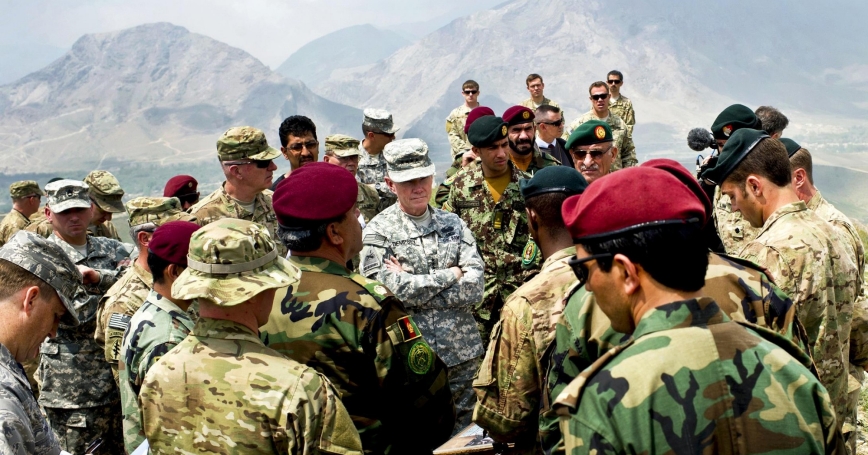 Among the more counterintuitive things I've encountered while working in Afghanistan was support among Afghan women for reconciliation with the Taliban. After all, gender rights are among the more palpable and popular reasons to detest the Taliban's style of rule. So why would some Afghan women be willing to stomach a return to such medieval norms?

The answer was equally surprising — the women who felt this way were mothers who would rather live beneath a burka than have their sons raped or molested by strongmen on the side of the government. As upside down as it may seem, the now widespread practice of bacha bazi (literally “boy play”) was prohibited under Taliban rule. In fact, the Taliban's 1990s rise to power was motivated and enabled by their opposition to this kind of predatory warlordism.

So I took note when a recent New York Times article chronicling this form of abuse did not tackle the uncomfortable irony that the Taliban were on the right side of this issue. Nor did the New York Times — in suggesting a de facto “look the other way” policy by the military — reference the U.S. government's long-established human rights vetting for security assistance to foreign forces, a familiar if imperfect aspect of U.S. policy and legislation (“Leahy Laws:” 22 USC § 2378d [PDF] and P.L. 113-76 Sec. 8057). This issue indeed deserves greater attention, along with its vexing context.

Pedophilia (i.e. bacha bazi) is not the only type of abhorrent human rights abuse within the Afghan security forces. Human Rights Watch has reported a pattern of suspected extrajudicial killings and other crimes by Afghanistan's security forces over the past 13 years. This growing awareness, coupled with the U.S. Congress tightening its 2014 Leahy requirements on human rights vetting for recipients of U.S. security assistance, resulted in the Pentagon developing updated internal guidance on human rights vetting for Afghanistan. Moreover, the U.S. command in Afghanistan had addressed the issue of sexual abuse in its tactical directive, which Gen. John F. Campbell, the U.S. commander in Afghanistan, recently reiterated. Indeed, the U.S. government has been actively wrestling with the dilemma that the fungible nature of U.S. assistance to Afghanistan means that U.S. funding might go to human rights abusers. As difficult and unsettling as this challenge may be, the issue wasn't a lack of oversight, or even a policy of looking the other way.

Rather, the crux of the issue is that deficient Afghan governance undercut key assumptions in the U.S. military's strategy and resulted in exceedingly difficult demands on its troops, who were left playing both the role of soldier and governance adviser in an environment where good versus bad was not always marked by white and black hats. The conflict in Afghanistan is political and fueled, in part, by popular grievance against predatory government officials. A functional rule-of-law infrastructure doesn't exist in much of Afghanistan, and the Taliban is again exploiting this shortcoming with its reputation for swiftly resolving disputes and delivering predictable, albeit archaic and barbaric, “justice” at the local level. Acknowledging the seriousness of this issue, Afghan President Ashraf Ghani has vowed to enact reforms to address rampant corruption (and has issued a forceful statement against the practice of bacha bazi). But these affronts cannot be righted overnight. So the United States put its military in a rather difficult situation — expecting its forces to play the role of both military trainer and surrogate criminal justice mechanism in a war-torn country with centuries-old cultural nuance and tribal rivalries.

And this type of challenge will likely become more vexing. Stung by costly and unsustainable interventions in non-existential conflicts like Iraq and Afghanistan, the United States is shifting to a “partnership” model of arming others to do the fighting. Yet those partners who may conveniently oppose American enemies do not, as a general rule, necessarily share U.S. values. This tension has arisen outside of Afghanistan, where efforts against the extremist groups Boko Haram and the Islamic State have faced the unsavory prospect of arming “partners” who are far short of upstanding. Such dilemmas are not a new facet of foreign policy, nor is the conundrum isolated to U.S. policy; some of America's Arab partners are reported to be assisting the Nusra Front (al Qaeda's affiliate in Syria) to fight the Islamic State in Syria and are similarly supporting al Qaeda in the Arabian Peninsula in their fight against the Iranian-backed Houthis in Yemen. Such is the topsy-turvy landscape of foreign policy, where the national security apparatus frequently finds itself caught between priority and principal, tied in the tension between perceived expedience in security and visceral violations of human rights.

This is a difficult quandary that the U.S. government has considered carefully. There is a reasonable argument that the best route to address human rights violations by Afghan forces is to remain engaged, and to make U.S. support conditioned upon remediation and accountability, as the Leahy law requires. Others might insist that the United States guarantee that not a single taxpayer dollar goes to an Afghan soldier who commits gross violations of human rights. Given the systemic and industrial scale of U.S. assistance to the Afghan security forces, the only way to do so would be to disengage entirely from Afghanistan, which would present a clear irony in ceding Afghanistan to the Taliban in the name of human rights. Regardless of how one views this dilemma, the real question is not whether the U.S. military was blind to crimes in their area of operations, but whether it should be expected to substitute for a corrupt or non-existent criminal justice system, and whether it should be deployed in such circumstances in the first place.

Jeff Eggers is a senior fellow at New America, an adjunct senior fellow with the RAND Corporation, and a former Special Assistant to the President for National Security Affairs.

This commentary originally appeared on Foreign Policy on September 28, 2015. Commentary gives RAND researchers a platform to convey insights based on their professional expertise and often on their peer-reviewed research and analysis.