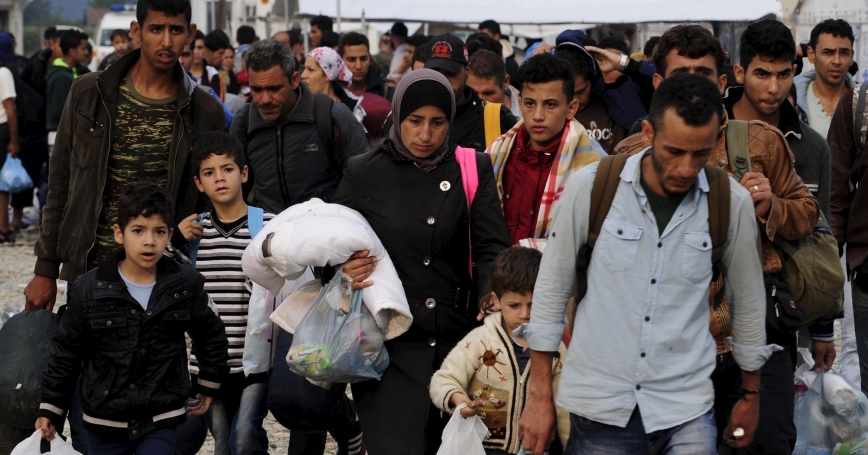 Refugees at a transit camp in Gevgelija, Macedonia, after entering the country by crossing the border with Greece, September 24, 2015

Nearly seven decades after Palestinian refugees fled or were forced to leave the portion of the Palestine Mandate that became Israel, those who survive and millions of their descendants officially remain refugees. The unwillingness of the surrounding countries to fully assimilate them perpetuated their refugee status. They were often confined to refugee camps that turned into sprawling slums. These became a continuing source of instability; recruiting reservoirs and armed camps for extremist groups; and in some cases, miniature states within states that defied host government authority. Could the millions of people fleeing the current conflicts in Syria and Iraq become the “new Palestinians”?

The Syrian and Iraqi conflicts have generated far greater numbers of refugees than did Israel's war for independence in 1948 and the aftermath of the 1967 war. About 700,000 people were displaced in 1948, some 30,000 of whom still survive. Another 200,000 left the territory occupied by Israel after the 1967 war, but they and their descendants now number about 5 million, of whom approximately 1.5 million still live in refugee camps. Forced to flee Syria's civil war, some of these Palestinians tragically have become refugees a second time.

The conflicts in Syria and Iraq have generated the greatest volume of refugees since World War II. Caught between the Syrian government's brutal counterinsurgent campaign, which seeks to make life untenable in areas beyond government control, and the equally brutal so-called Islamic State in Iraq and Syria (ISIS), more than 4 million have fled Syria. In addition, nearly 8 million Syrians are internally displaced — they have fled their homes but remain elsewhere in Syria. The total comprises more than half of the entire pre-conflict Syrian population.

Iraq has 3.6 million internally displaced persons. Another 400,000 have left the country. As government forces and pro-government militias, which are mostly Shiite, try to recapture cities held by ISIS, where the population is mostly Sunni, these numbers will grow.

These conflicts have resulted in a total of about 16 million displaced persons — a figure that will increase. The sectarian and ethnic divisions that authoritarian rulers once kept in check now drive the fighting, making it an existential struggle for all participants. None can imagine surviving under the rule of their foes — they will fight to death. In any case, refugees are unable to return while the fighting continues, as it almost certainly will.

The neighboring countries of Lebanon and Jordan cannot easily absorb the vast numbers of refugees who have fled there. The resources of these countries are limited, and a large population of refugees would change the composition of their societies and the delicate balances that govern their politics. Both Lebanon and Jordan received large numbers of Palestinian refugees, and this resulted in security problems. In 1970, Jordan fought a brief but bloody civil war with the Palestine Liberation Organization, which created its own army and, flouting Jordanian authority, waged a terrorist campaign on Israel, thereby exposing Jordan to condemnation and retaliation.

Turkey, where nearly 2 million Syrian refugees reside, does not want them. Its tolerance may decline further if fighting between government forces and Kurdish separatists escalates even further. Worried about their own stability, the Gulf monarchies have not offered to accept any refugees. Neither will Russia.

The European Union, led by Germany and Sweden, has offered to accept significant numbers: several million over the next five years, although some members of the EU, especially in Eastern Europe, refuse to take any. It is not clear how large a dent this will make in the numbers of Syrian or Iraqi refugees. The flow of refugees to Europe is not only from the Middle East; it includes those trying to cross the Mediterranean from North Africa, fleeing the chaos in Libya, as well as economic refugees from other African countries.

Traffickers have taken advantage of Europe's willingness to take in Syrian refugees by adding others from Afghanistan and Africa. The refugees destroy their citizenship papers, cross the border and claim asylum.

Europe's refugee policies are still under construction. Will the EU simply accept as many as it can of those who reach its borders, turning back the rest once a certain quota is reached? Will governments try to vet those they take in by screening refugees currently registered in camps in Lebanon and Jordan? Or will the West decide eventually that it simply cannot absorb the flow of refugees and move to establish militarily protected enclaves in those countries?

Individuals with professional skills who are fleeing Syria and Iraq will find work and can be easily absorbed, although this represents a major human capital loss for the future of these countries. However, the overwhelming majority of the refugees are young men with minimal education and few skills to offer. They will not readily find employment. There is no evidence, thus far, of armies of jihadist agents or sleepers among the refugees, but as a class, large numbers of young, jobless men coming from violent environments need close attention.

Refugees running from the conflicts in Syria and Iraq pose a threat to the stability of the region and raise security concerns beyond it. This is not an argument against opening doors to refugees, but good intentions alone will not suffice. If the international community is to avoid seeing the emergence of a population of new Palestinians lasting decades into the future, it will have to craft a more coherent approach.

Brian Michael Jenkins is a senior adviser to the president of the nonprofit, nonpartisan RAND Corporation and author of “How the Current Conflicts Are Shaping the Future of Syria and Iraq.”

This commentary originally appeared on The Hill on October 9, 2015. Commentary gives RAND researchers a platform to convey insights based on their professional expertise and often on their peer-reviewed research and analysis.