Are EU Migrants Over-Qualified for the Jobs They Do? 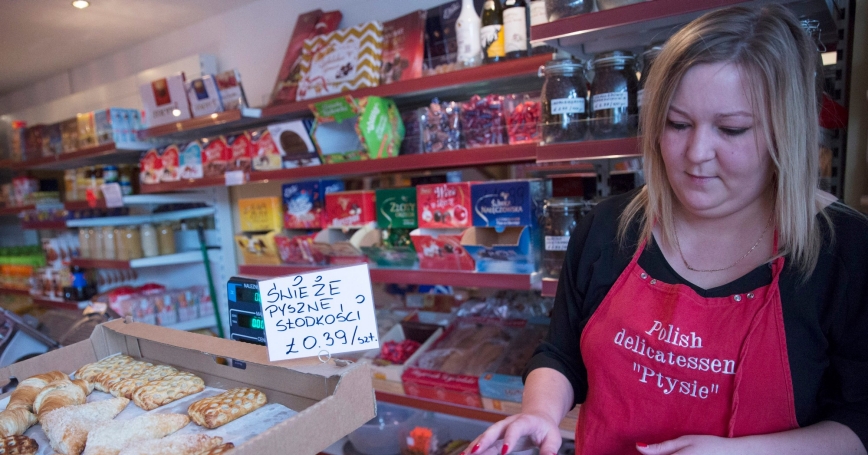 A woman works at a Polish delicatessen in Grays, Britain, December 11, 2015

by Barbara Janta and Joanna Hofman

While much of the focus during the UK's renegotiation of its EU membership has been on the in-work benefits of EU migrants, wider issues related to the qualifications and skills of EU migrants should be considered as well. Findings from a study on the socioeconomic inclusion of migrant EU workers in a number of EU countries suggest that the 'skills mismatch'—EU migrants having jobs that are not consistent with their skills—is a more pressing issue for Europe.

Analysing data across Europe, we know that EU nationals predominantly migrate for economic reasons, such as seeking employment. They also tend to be better educated on average than the host population. In England and Wales, for example, 23% of the working-age, native-born population has no qualifications (e.g., did not complete lower-secondary school). This compares with only 13% of migrants from countries that had joined the EU prior to 2004 (excluding Ireland and the rest of the UK, the EU-15) and 16% of EU migrants from the 2004 and 2007 accession countries (EU-12).

Despite having the higher level of completed education on average, it has been suggested that large proportions of migrant EU workers might be over-qualified for the jobs they have in their host countries. The over-qualification is particularly striking for EU-12 migrants. Cross-examining 2011 census data for England and Wales on qualifications with data on occupations, we found that the risk of the native population and EU-15 migrants being overqualified for their jobs is relatively small, but disproportionately high for EU-12 migrants. While only 16% of EU-12 migrants come to England and Wales with no qualifications, as many as 42% have low-skilled jobs. 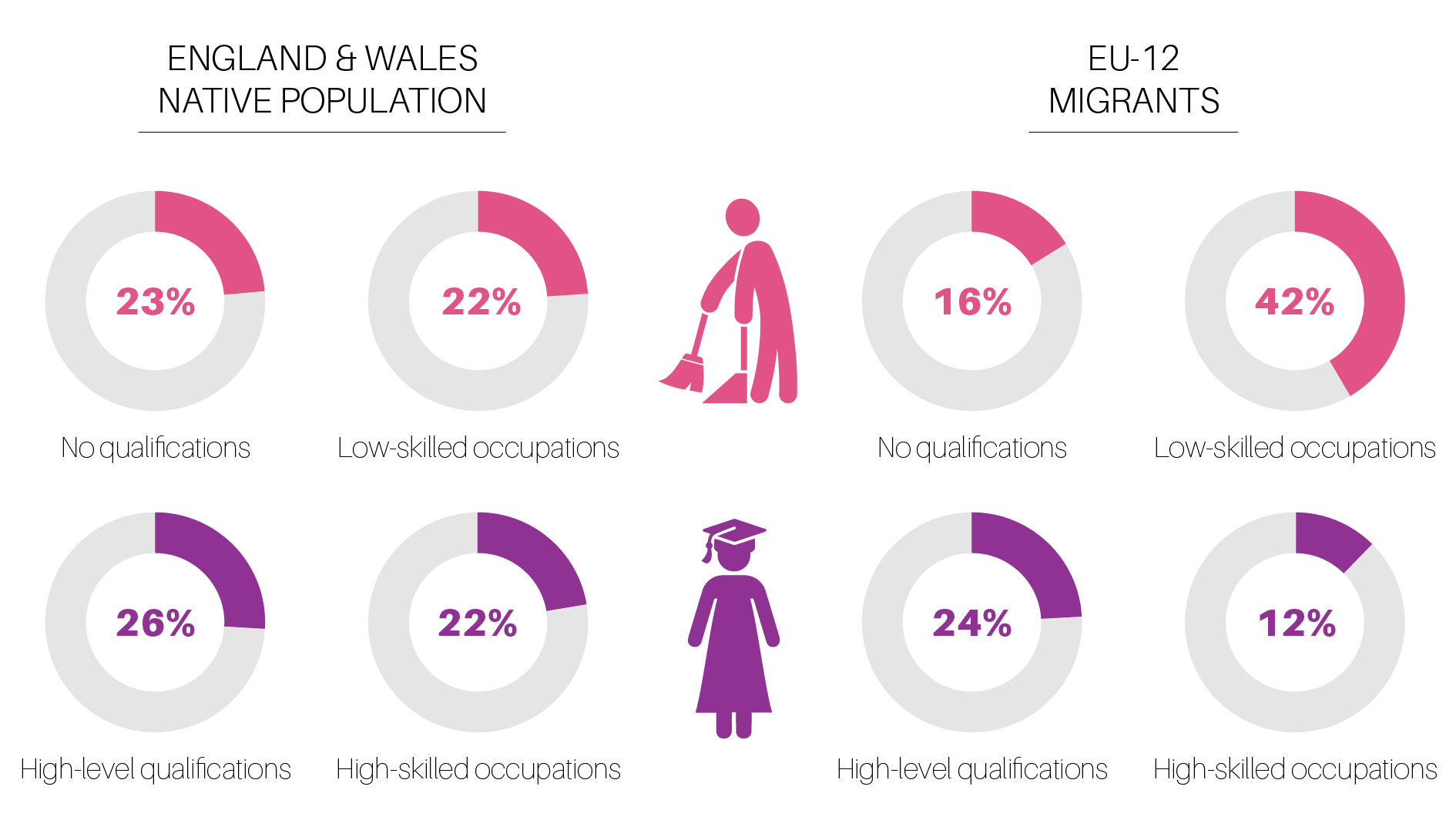 Similar conclusions are found in other Western EU countries, although direct comparisons are more difficult to make. In Frankfurt, compared to the German-born population, migrant workers were underrepresented in the occupations that require expert knowledge and specialist skills. This does not align with the level of educational attainment among migrants in Germany when compared to the German-born population.

With four out of ten European employers (PDF) reporting difficulties in finding employees with the right skills, EU migrants could help fill this gap and provide a boost to local economies. While there isn't a single 'silver bullet' that can facilitate a better match between EU migrant populations and job vacancies, our research provides some potential solutions to these challenges, namely language support and recognition of qualifications.

Our studies show that EU migrants often have insufficient language skills, which limits their performance and professional development opportunities, such as promotion and career progression opportunities and finding other jobs requiring a higher skills level. Since the knowledge of a local language is often a prerequisite to getting a higher-skilled job and moving up the professional ladder, EU nationals should be encouraged to invest more time in learning the host country's language, both before they migrate and while they are living in the host countries.

Increasing the promotion of language courses to prepare migrants before they leave their countries will be important. These courses can be expanded through a mix of national and EU funding, possibly through the European Social Fund (ESF), the main European funding instrument for supporting jobs. In addition, the role of the European Employment Services (EURES), a cooperation network designed to facilitate the free movement of workers within Europe, could be enhanced to provide further information on job opportunities and living abroad.

Strengthening the recognition and validation of professional qualifications and diplomas could be considered another priority, as it facilitates better job matching. Despite several initiatives at the EU level, EU migrants often do not get recognition for qualifications gained in their home countries. For example, when looking at Frankfurt, specifically, many EU migrants appeared unable to find information on how to get their qualifications recognised. When qualifications are transferrable the probability migrants will find a job that matches their skill level is likely to increase, along with their income.

National skills recognition schemes in the host countries, supported by a mix of national and European funds, could further improve opportunities for EU migrants to have their qualifications recognised. Additionally, a further simplification of the current system to recognise professional qualifications in the EU will help to aid understanding for migrants, but this is likely to require MEPs to call for an evidence review of the most recent reform of the system.

The current debates on EU mobility are focused on what EU migrants take away from their host countries, and the costs they may bring taxpayers. As shown in our study, EU migrants increase pressure on local services and the increased competition for jobs creates possible tensions between local and migrant workers. But what may often be ignored in these debates is the contribution that EU migrants bring to local labour markets and how this contribution can be further enhanced if they are employed in jobs using their skills and qualifications to the full potential. This argument can be substantiated by examining EU migrants' economic contributions, both to the tax base and the economy of their host countries, and their potential to help close the skills gap for employers.

Barbara Janta and Joanna Hofman are both EU migrants originally from Poland, who work in the UK as senior analysts at RAND Europe. They have recently completed a study looking at the socioeconomic inclusion of migrant EU workers across European countries.

This commentary originally appeared on EurActiv on February 24, 2016. Commentary gives RAND researchers a platform to convey insights based on their professional expertise and often on their peer-reviewed research and analysis.