Democracy in the Arab World: Still a Mirage 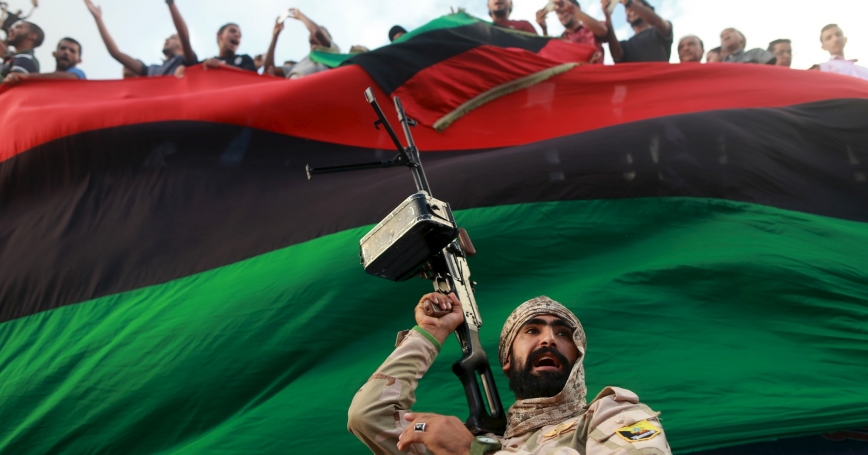 One of the members of the military protecting a demonstration against candidates for a national unity government proposed by U.N. envoy for Libya Bernardino Leon, in Benghazi, Libya, October 23, 2015

More than five years after the Arab Spring began, the euphoria that accompanied the region's early uprisings has been replaced by a dogged realism. From the indignant graffiti scrawled on walls across Tunis to the war-torn neighborhoods of Damascus and Tripoli, the region and the world's hopes of establishing peace and democracy have largely faded.

Take Tunisia, where the street vendor Mohamed Bouazizi set himself on fire in January 2011 and inspired millions across the Arab world to rise up against oppression. Today, the country, the only functioning democracy to have emerged out of the turmoil of 2011 and 2012, is in danger of sliding into violence thanks in part to the chaos engulfing neighboring Libya. This month, dozens of militants allied with the Islamic State, or ISIS, stormed the Tunisian town of Ben Gardane, near the Libyan border, assaulting police and military posts in what Tunisian President Beji Caid Essebsi called an “unprecedented” strike that left at least 54 people dead. In fact, it followed several high-profile attacks in the past year: in June 2015, militants targeted Western tourists at the beach resort of Sousse and in March 2015, they did the same at the Bardo National Museum in Tunis. Ordinary Tunisians, meanwhile, are growing restless. A sputtering economy and high unemployment have triggered protests across the country, and the Tunisian government imposed a nationwide curfew that lasted from late January to early February in response.

The situation looks similarly grim in other Arab Spring hopefuls. In Egypt, for example, the democratic elections that catapulted the Muslim Brotherhood to power in 2012 gave way the next year to a coup that installed a military government under President Abdel Fattah el-Sisi, the former head of the Egyptian armed forces. Sisi, too, now faces a growing danger of militant attacks, as the downing of a Russian passenger jet over the Sinai Peninsula in October 2015 made clear. He also faces a struggling economy, including an acute foreign currency shortage that is crippling some businesses. Perhaps most disconcerting, the Sisi government has failed to stem a wave of discontent that has spread from the country's poor to its wealthy.

What is even more troubling is that Libya, Syria, and Yemen, all erstwhile Arab Spring aspirants, remain mired in bloody civil wars. Libya, where the administration of U.S. President Barack Obama helped overthrow the government of Muammar al-Qaddafi in 2011 and supported democratic elections in the aftermath of his ouster, now hosts the highest number of Salafi–jihadist groups in Africa. In the place of a functioning government, the country hosts a patchwork of warring militias that are unaccountable, poorly organized, and deeply fractured.

Across the region, according to the World Bank, the quality of governance today is lower than it was before the Arab Spring.

Yemen is little better. After cracking down on Yemeni protesters in 2011, President Ali Abdullah Saleh eventually agreed to cede authority to his vice president, Abdu Rabu Mansour Hadi. But Hadi resigned in January 2015 after Houthi insurgents seized the capital, plunging the country deeper into a civil war that has since drawn in a coalition led by Saudi Arabia and killed thousands of civilians.

Finally, Syria remains locked in a civil war that has killed between 250,000 and 500,000 civilians and displaced some 11 million people, nearly five million of whom have sought refuge abroad. The war, which has spilled over into Syria's neighboring countries, has attracted more foreign extremists than any other modern conflict in which Salafi jihadists have fought—by some estimates, over 20,000 of them.

Across the region, according to the World Bank, the quality of governance today is lower than it was before the Arab Spring in nearly every category—from government effectiveness to corruption. As the NGO Freedom House noted in its 2016 annual report, the prospects for improvement remain bleak due, in part, to the prevalence of a “model of governance that erodes the kind of long-term and inclusive stability the region desperately needs” and “sacrifice[s] public safety for regime security.”

There are many reasons for the failure of democratization in the post-Arab Spring Middle East, some of which I discussed in “The Mirage of the Arab Spring,” published in Foreign Affairs in 2013. Many of the region's governments, especially in the Gulf, derive the majority of their funding from sources such as oil and foreign aid that allow them to avoid taxing their citizens, eliminating a possible source of demand for greater political representation.

The Saudi government, for example, is fighting reforms by buying off dissenters, providing lavish benefits in the form of education, medical care, energy subsidies, and well-paid government jobs to its citizens. Meanwhile, those regional monarchies without large per-capita oil incomes, such as Jordan, Morocco, and Oman, have managed to hold on to power by accepting modest legislative changes in the place of abandoning their monarchies. Nor have regional conditions encouraged further political change. After the collapse of the Soviet Union, the United States and its Western European allies supported political liberalization in Eastern Europe, welcoming countries such as Poland into democratic institutions including the European Union and NATO. No such comparable institutions exist in the Arab world.

Despite this gloomy prognosis, at least for now, all is not lost in the Middle East. The United States should focus on at least two steps to prevent further destabilization in the region.

The first is shoring up Tunisia, the last bastion of the Arab Spring. The United States can provide assistance in several areas. To begin with, Washington should help fund Tunisian programs that strengthen local governments, building on Tunis' own efforts to this end. In 2014, the Tunisian government began a five-year municipal investment plan to improve local governance by, among other measures, reforming the management of public funds assigned to municipalities. The goal is to make local governments more capable and accountable and to cut down on graft.

The United States can also provide assistance to higher education institutions in Tunisia and encourage them to improve the quality of teaching and to adhere to international best practices. That would help ensure that Tunisia's universities produce graduates with the skills required by the job market. It could also help to reduce unemployment and encourage a high-skilled workforce that supports long-term economic growth.

Washington should focus on stemming the Arab world's slide into further chaos and laying the groundwork for future stability.

The U.S. Departments of State and Defense should also ramp up efforts to assist Tunisia's Ministries of Defense, Interior, and Justice, which can serve as bulwarks against the growing tide of extremism in Tunisia and the region. Through U.S. State and Defense Department security cooperation programs, the United States has already helped encourage the gradual restructuring of the country's security architecture: from the police-heavy state of former leader Zine el-Abidine Ben Ali to a system in which the Ministries of Defense and Justice play greater and more effective roles in countering ISIS and other terrorist groups. Finally, to help counter violent extremism in Tunisian communities, the United States should ramp up its support for de-radicalization programs in the country.

In Libya, meanwhile, the United States needs to establish a sound equilibrium between its counterterrorism efforts and its attempts to contribute to political stability. The growing influence of Islamist extremist groups in Libya, especially that of ISIS, has caused some in Washington to demand greater U.S. counterterrorism activity in the country. Some U.S. military leaders argue that U.S. Special Operations Forces need to train, advise, and even accompany Libyan militias attempting to retake territory from ISIS and other militant groups, and that Washington should conduct airstrikes against ISIS' training camps, command centers, and munitions depots. But there is an equally pressing need to make progress on diplomatic initiatives to form a unity government in the country, without which U.S. military strikes could reduce the prospects for stability by strengthening illegitimate nonstate actors. The challenge will be finding a way to defeat ISIS and cobble together a unity government that can prevent the country from again becoming a sanctuary for extremist groups. Across the region, the United States should keep this necessary balance of political and military initiatives in mind.

The United States' power to force political change in the Arab world is limited. In 2013, I wrote that the “demise of Middle Eastern authoritarianism may come eventually” but that “there is little reason to think that day is near.” That remains the case today. For the moment, Washington should focus on stemming the Arab world's slide into further chaos and laying the groundwork for future stability.

Seth G. Jones is Director of the International Security and Defense Policy Center at the nonprofit, nonpartisan RAND Corporation and an adjunct professor at Johns Hopkins University's School for Advanced International Studies.

This commentary originally appeared on Foreign Affairs on March 17, 2016. Commentary gives RAND researchers a platform to convey insights based on their professional expertise and often on their peer-reviewed research and analysis.