5 Things That Should Happen When Obama Visits Hiroshima 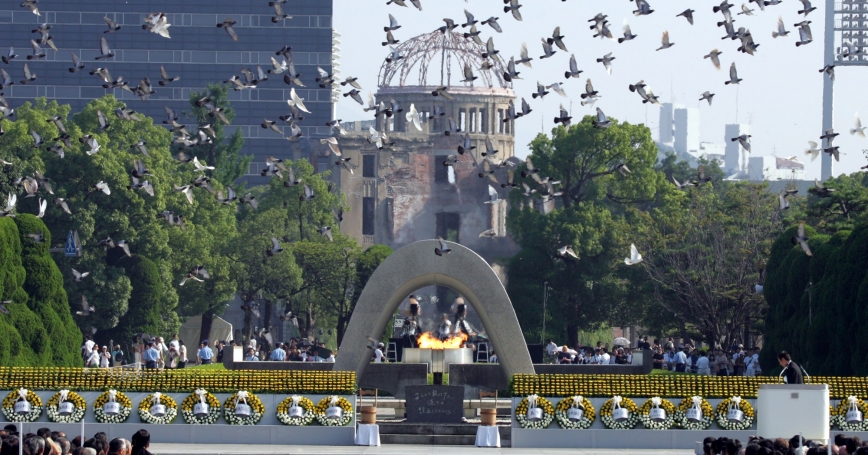 Doves fly over the Peace Memorial Park with a view of the gutted A-bomb dome at a ceremony in Hiroshima, Japan

Earlier this month, the White House announced that President Barack Obama will visit the city of Hiroshima on May 27 at the conclusion of the G-7 summit in Ise-Shima, Japan. This historic decision will make Obama the first sitting U.S. president to visit the city and the announcement was welcomed warmly by observers across Japan as a sign of respect and friendship between the American and Japanese people. It was the right decision and it will make the two countries' ties even stronger. There are five important aspects to bear in mind about this trip.

First and foremost, this trip will not be part of an “apology tour,” nor is it the occasion for a big policy speech; it is instead likely to be about quiet reflection and paying respect. An apology has already been clearly ruled out by the White House and the Japanese kantei, or prime minister's office, has also made clear that it neither expects nor wants an apology. Indeed, while Prime Minister Abe Shinzo will accompany the president from Ise-Shima to Hiroshima, it is as yet unclear if either leader will make any public remarks, and the president will almost certainly not give a major speech. He may visit the Hiroshima Peace Memorial Museum and gaze at the iconic Atomic Bomb Dome (the structure just 800 yards from the hypocenter that survived the blast partially intact), but he is unlikely to issue a speech. This is appropriate since his presence alone is enough to establish precedent and signal a new deepening of the U.S.-Japan relationship, which has moved forward 70 years after the dropping of the atomic bombs.

Second, if the president does not make a speech in Hiroshima, then he certainly should talk about what he saw and felt during his time there as soon as he gets back to the United States, perhaps in an op-ed in a major newspaper. With China, Russia, North Korea and Pakistan rapidly expanding and modernizing their nuclear arsenals, it is important that the president leverage his trip to reinforce the message that these nations should be reducing, not enhancing, their reliance on these weapons that do not discriminate between uniformed military personnel and civilian non-combatants.

The president has talked of his desire to promote a world free of the existential terror posed by nuclear war; he can help reduce the prospect of such an event by drawing a sharp contrast between the peaceful approach to resolving international differences represented by the United States and its allies versus those states that are seeking to change national boundaries through the use of paramilitary forces, support for terrorist groups, coercion and aggression.

Third, the president's trip is also clearly aimed at signaling respect for the people who went through the experience of the bombing, and to that end it would be good if Obama can meet with some of the hibakusha, or survivors of the blasts in Hiroshima and Nagasaki. While Obama is not going to get to Nagasaki on this visit, it's likely that some from that city will try to come to Hiroshima in the hopes of meeting him, and if possible a meeting with some who lived through those painful experiences from both of the bombed cities would further advance the agenda of strengthening the U.S.-Japan relationship.

Fourth, Obama's decision to visit Hiroshima also offers an opportunity to extend recognition and respect to the many thousands of non-Japanese who suffered from the atomic bombs dropped on Japan. An estimated 20,000 Koreans, most working as forced laborers imported from their colonized homeland, lost their lives in the atomic bombing of Hiroshima alone and survivors often struggled with social stigma, even after they made their way back to Korea at war's end. Similarly, about a dozen U.S. service members were killed by the Hiroshima blast and prisoners of war from other nations, including the United Kingdom, were present when the bombs fell in Nagasaki.

By reaching out to offer dignity and respect to these survivors, even by simply noting their experiences in any remarks he leaves behind in a visitor's book at the Peace Museum, the president can demonstrate to all observers that the strongest nation on Earth is not afraid to reckon with its past, even the most difficult parts of its history. This can set a valuable standard that may encourage other countries, including U.S. allies in the Asia Pacific, to confront their own pasts as openly and honestly as possible.

Finally, the president's visit opens the door to a first-ever visit to Pearl Harbor by a sitting Japanese prime minister and Obama should express clearly his hope that Abe will make a strong commitment to pay such a visit on a future trip to the United States. This would not be an “apology tit-for-tat,” but rather a recognition by the two sides of the horrors of war and a process of healing and deepening friendship with the survivors. While the prospects of Abe visiting Pearl Harbor this year appear slim, and while Obama is unlikely to extend an official invitation to any foreign leader to visit after his own term of office ends on Jan. 20, 2017, the Japanese are masters of protocol and etiquette and will surely understand that a reciprocal visit would be appropriate if issued formally by Obama's successor.

If Abe visits the United States early in 2017 to meet his newly-elected American counterpart, a Pearl Harbor visit should be a part of his itinerary. Such a move would be an important and highly symbolic step to carry the impressive momentum that Obama and Abe have developed in the bilateral relationship forward into the next stage of the U.S.-Japan alliance.

Scott W. Harold is the associate director of the RAND Center for Asia Pacific Policy, a political scientist at the nonprofit, nonpartisan RAND Corporation, and a member of the Pardee RAND Graduate School faculty.

This commentary originally appeared on U.S. News & World Report on May 23, 2016. Commentary gives RAND researchers a platform to convey insights based on their professional expertise and often on their peer-reviewed research and analysis.