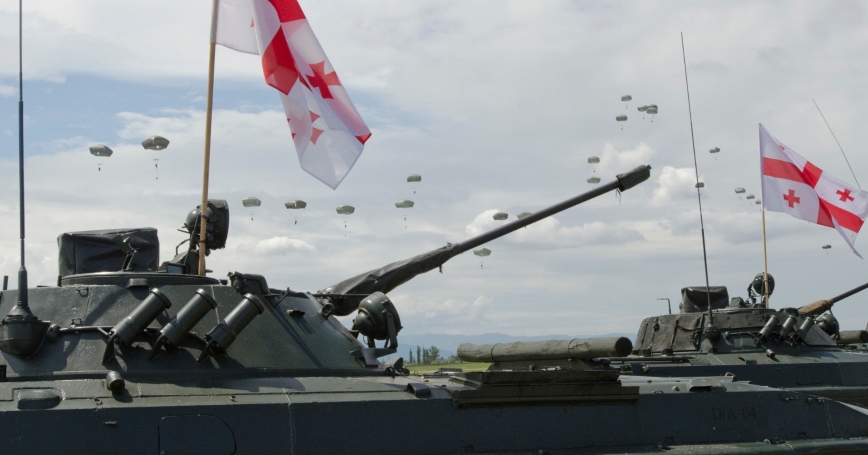 Paratroopers parachute into the opening ceremony of Exercise Noble Partner in Vaziani, Georgia, May 10, 2015

At a summit meeting in Warsaw in early July, NATO will consider how best to deter Russia. Ukraine and the Baltics will be at center stage. But Georgia deserves a signal in Warsaw that it will not be forgotten if Russia adopts a harsher policy.

Georgia's security always seems to be precarious. In August 2008, Russian troops assaulted Georgia amid its shelling of the separatist enclave of South Ossetia. The invasion came after NATO agreed that Georgia would become a NATO member but set no timetable. The war led to the loss of Abkhazia and South Ossetia, their declaration of “independence,” and Georgia breaking diplomatic relations with Moscow. Since then the Georgian survival strategy has been to thread the needle between drawing closer to the West and maintaining the semblance of a peaceful relationship with Russia, which opposes Georgia's Western-leaning foreign policy.

Russian pressure on Georgia is unrelenting. It has turned Abkhazia and South Ossetia into military and criminal outposts. Russian troops regularly move South Ossetian boundary fences, step by step, deeper into Georgia. An onslaught of Russian propaganda claims that the European Union and NATO will never admit Georgia, and that Russian and Georgian values are traditional, not like those in the liberal West.

Poverty and declining living standards are contributing to the declining popularity of the current government. A February-March poll by the U.S. National Democratic Institute (NDI) found that over the previous two-and-one-half years 42 percent of respondent households saw themselves as worse off, and only 10 percent better off. Parliamentary elections will be held next October and the campaign has already produced incidents of violence.

Despite their travails and the Russian “soft power” onslaught, Georgians maintain their focus on moving westward. In the NDI poll, 61 percent of respondents wanted Georgia to join the European Union, versus 20 percent who preferred the Russian-led Eurasian Economic Union. By 68 percent to 19 percent, Georgians favored joining NATO, and 47 percent saw Russia as their biggest threat compared to 2 percent for NATO. The prospect of visa-free travel to EU member states garnered 84 percent approval....

This commentary originally appeared on The National Interest on May 25, 2016. Commentary gives RAND researchers a platform to convey insights based on their professional expertise and often on their peer-reviewed research and analysis.