Why Has Obama Lifted the Arms Sales Ban on Vietnam? 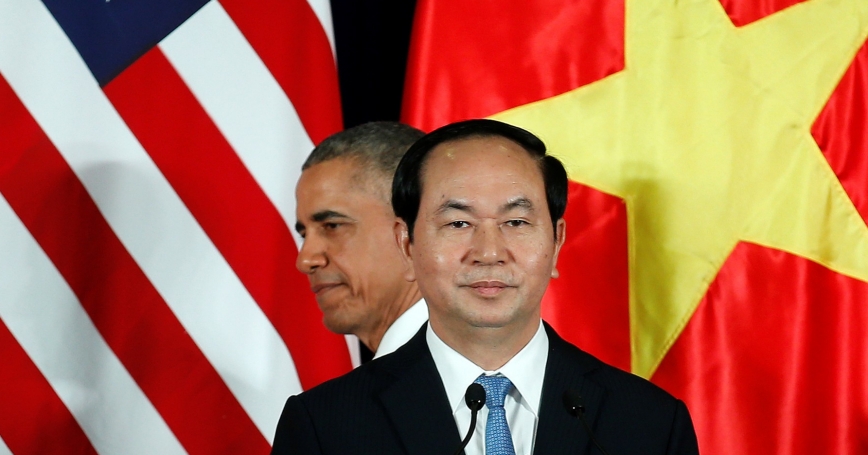 During President Barack Obama's visit to Vietnam this week, he announced that, more than four decades after the end of the war and 20 years after the two countries normalized relations, Washington is lifting its decades-old ban on sale of lethal defense articles to Hanoi.

What led to this week's dramatic new deepening of ties with America's former enemy, which continues to be a one-party Communist dictatorship with a poor human rights record? At least four factors contributed to the president's decision to lift the ban.

First, Obama's signature foreign policy initiative is his administration's “rebalance” to the Asia-Pacific, and this constitutes an important element of the backdrop against which the deepening of U.S. military ties with Vietnam is unfolding.

The “rebalance” is a whole of government effort that seeks to develop broader and deeper relations with Asian allies and partners, including emerging middle powers such as Vietnam.

In the course of executing the “rebalance,” then-Secretary of Defense Leon Panetta visited Vietnam's Cam Ranh Bay in 2012 to sign a deal on supply, logistics and repair facilities. In 2015, Obama welcomed Vietnamese Communist Party General-Secretary Nguyen Phu Trong to the White House.

At its most basic, the Obama administration is seeking to improve relations with Vietnam as part of its outreach to the region.

Second, closer ties with Vietnam have been accompanied by U.S. efforts to encourage Hanoi to relax its constraints on civil liberties; permit labor unions to organize legally; and carry out further economic (and ultimately hopefully political) reforms aimed at transparency, accountability and better protection of human rights.

These steps in the political, economic, diplomatic and military spheres will not only help smooth the way for closer political relations with Washington. They will also facilitate Vietnam's participation in and compliance with the Trans-Pacific Partnership trade agreement that the United States and Vietnam negotiated with 10 other Pacific Rim nations.

A Vietnam that is more closely linked to the United States on diplomatic and security issues is a Vietnam that is less likely to feel anxious about any perceived threats to the regime that might stem from liberalizing its economic or political spheres.

Traditionally, the militaries of most Southeast Asian nations, including Vietnam, have been dominated by their ground forces. This has meant that they typically lack sophisticated capabilities for monitoring what happens on the sea and in the airspace above it.

In 2015, the Pentagon launched a $425 million initiative to help Vietnam and the Philippines in the areas of maritime domain awareness and patrol. This suggests that leading candidates for early U.S. sales to Vietnam may include surface vessels; coastal radar; and manned and unmanned intelligence, surveillance and reconnaissance platforms that can help Hanoi form a better and timelier picture of what is happening in the maritime spaces to which it lays claim.

Additionally, the United States has tended to use arms transfers not merely to earn point-of-sale revenues but also to establish ongoing relationships of security cooperation that include both follow-on sales of spare parts and repairs as well as opportunities for educational exchanges, training and exercises.

While the relationship may start with limited sales, it could in time lead to a much more comprehensive defense relationship even absent sales of major platforms.

Finally, the lifting of the arms embargo is occurring in part because Vietnam's security environment has grown far more challenging in recent years as neighboring China has turned its attention toward disputed claims in the South China Sea. This is something that the United States recognizes and feels concerned about as well, giving Washington and Hanoi a measure of shared threat perception.

Beijing's willingness to endure substantial criticism over drilling activities in Vietnamese-disputed waters in 2014 and its rapid construction and militarization of artificial islands in the Spratly Islands chain have shocked Hanoi and spurred fears that China may be preparing to undertake further measures that would come at Vietnam's expense.

These could include announcing a South China Sea Air Defense Identification Zone and/or an announcement that Beijing will escort or evict Vietnamese forces off of the land features in the Spratlys that they are currently occupying.

While U.S. arms sales are not likely to be able to dissuade China from undertaking such steps, they could ultimately help improve Vietnam's situational awareness during a rapidly unfolding contingency and stiffen its willingness and capacity to stand up for itself.

The lifting of the arms embargo needs to be understood as part of the long process of normalizing relations with a former U.S. enemy and building toward a more cooperative, economically dynamic and strategic future-oriented relationship.

While problems remain in Vietnam's domestic record on human rights, it may be possible to encourage further economic and even political reforms through an emphasis on security cooperation premised on shared regional interests and a common threat perception stemming from Chinese actions.

Over the long run, U.S. arms sales are likely to help further enhance U.S. ties to, and influence in, Vietnam and the Southeast Asian region.

Scott W. Harold is associate director of the RAND Center for Asia Pacific Policy, a political scientist at the nonprofit, nonpartisan RAND Corporation and a member of the Pardee RAND Graduate School faculty.

This commentary originally appeared on Newsweek on May 25, 2016. Commentary gives RAND researchers a platform to convey insights based on their professional expertise and often on their peer-reviewed research and analysis.