Is the Surge in Terrorist Attacks Coincidence or Coordinated Campaign? 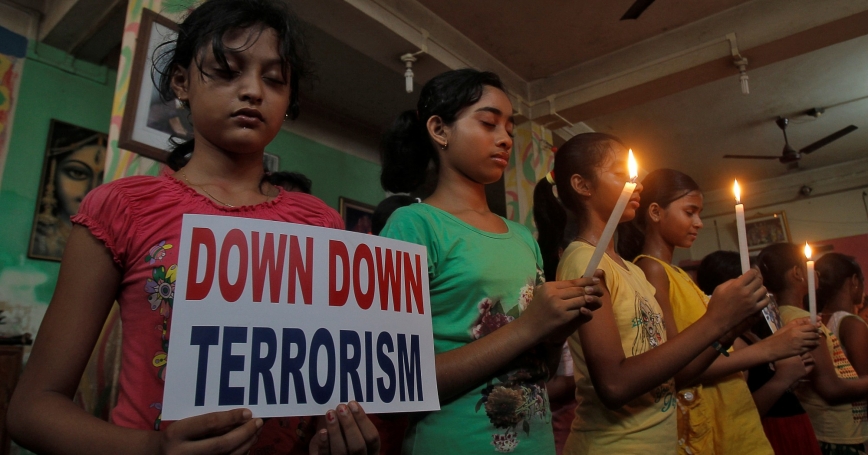 Students hold a placard and candles during a vigil after a terror attack on Dhaka, Bangladesh, in Agartala, India, July 3, 2016

Since the attack in Orlando on June 12, the Islamic State of Iraq and Syria (ISIS) has claimed or is suspected of responsibility for ensuing terrorist attacks in Jordan on June 21, Lebanon on June 27, Istanbul on June 28, Dhaka, Bangladesh, on July 1, Baghdad on July 3, and Saudi Arabia on July 4. Are these attacks part of a new global strategy by ISIS or, except for the ISIS label, a coincidence? Whatever the investigations ultimately reveal, the facts may be portrayed (or ignored) to fit narratives written even before the blood has dried.

Do the recent attacks represent a surge in terrorist violence? Not really. In the course of the ongoing conflict, similar spates of attacks have occurred from time to time. People tend to view them as evidence of escalation or a strategic shift, as something new and significant, when the cluster of activity is little more than a reflection of chance — several groups of attackers getting lucky at the same time and causing the world to take notice. A similar spike materialized in January with terrorist attacks in Libya, Iraq, Turkey, Afghanistan, Indonesia and Egypt.

Do the recent attacks represent a surge in terrorist violence? Not really.

Another part of the equation is that Islamist extremists, both al Qaeda and ISIS, annually call for attacks during the holy month of Ramadan, which this year ended on July 5. While mainstream Muslims regard bloodshed during the religious period as sacrilegious, jihadists are persuaded that what they misguidedly perceive as noble acts — like killing infidels — will earn them greater reward if carried out during Ramadan. Even greater violence was seen during last year's Ramadan.

On June 26, 2015, as ISIS massacred over 200 civilians in Kobani, Syria, jihadists elsewhere carried out a series of terrorist attacks: Al-Shabaab militants attacked an African Union military post in Somalia, terrorists gunned down tourists at a beach resort in Tunisia, bombed a Shiite mosque in Kuwait, carried out another suicide bombing in Syria, and beheaded one person and injured several others in France. Altogether, more than 400 people were killed in these June 2015 attacks. This year, the reported combined death toll for jihadist terrorist attacks since Orlando, including at least 250 killed in Baghdad, is 385.

The 2015 attacks were unconnected with one another. It is not yet clear whether all of the attacks are linked this time around.

The terrorist attacks in Paris in November and Brussels the following March clearly were part of a terrorist campaign conducted by a network of French and Belgian fighters recruited and led by Abdelhamid Abaaoud, a Belgian foreign fighter who joined an ISIS unit in Syria in 2013. Other members of his network included ISIS veterans returning home assisted by an underground of local confederates. That network has been largely dismantled, but European authorities are discovering and dismantling the embryos of new networks.

The more recent attacks in Orlando, Istanbul, Baghdad, Jeddah and Medina in Saudi Arabia, and Dhaka might be explained in one of several ways.

White House and Pentagon announcements that U.S. airstrikes have killed specific ISIS commanders, giving their name and position, imply that American intelligence has a detailed wiring diagram of ISIS leadership. But do we have detailed information on its decisionmaking or do our assumptions rest upon what we observe? What we see are some attacks that appear to support a logical strategy: destabilizing Turkey, stoking sectarian tensions in Baghdad, shaking up Saudi Arabia. Other attacks carry the banner of ISIS to bolster the credentials of their perpetrators, but reflect local contests and offer little evidence of direct ISIS involvement. Most of the homegrown terrorists, like the shooter in Orlando, simply declare themselves to be ISIS fighters, and while ISIS applauds their actions, it cannot be said to have carried them out.

A displaced terrorist group can still carry on a global campaign. Following the U.S. invasion of Afghanistan and the dispersal of al Qaeda in late 2001, a global campaign of terrorism unfolded with major al Qaeda terrorist attacks in India, Pakistan, Tunisia, Yemen, Indonesia, Kenya, Saudi Arabia, Morocco, Turkey, the Philippines, Spain, Egypt, the United Kingdom and Jordan. These were carried out by alumni of al Qaeda's training camps augmented by new recruits.

A displaced terrorist group can still carry on a global campaign.

Between September 2001 and April 2006, 33 major terrorist attacks were linked to al Qaeda and an even greater number of terrorist plots had been uncovered and foiled. By 2006, the global terrorism campaign was on the decline as local governments — some of whom might have preferred to stay on the sidelines in the U.S.-led global war on terror — joined the international effort and ripped up local al Qaeda networks when faced with attacks on their own soil. The point is that even while al Qaeda's leaders were on the run, their followers were able to wage a worldwide terrorist campaign. We may see a time lag here, as well, with a global terrorist campaign inspired by ISIS lasting long after its demise as a territorial entity.

A number of the members of the terrorist network responsible for the Paris attack in November and the Brussels attack in March are in custody and should be able to tell authorities more about that network, which, in turn, may offer some clues about the role of ISIS in the current attacks. But will members of the network know whether its leader, Abaaoud, was an entrepreneur who persuaded ISIS leaders to support his initiative to launch a terrorist campaign in France and Belgium, or whether he was merely a lieutenant acting on behalf of higher-ups in ISIS? (One has to be cautious even about what those arrested say: Abaaoud was the local fighters' only contact in Syria and he may have presented himself more as the leader than as a subordinate taking orders from others.) And we still don't know to what degree Abaaoud was a unique figure and therefore whether ISIS retains this capability with him gone.

Turkey has identified the attackers at Istanbul's airport and has additional suspects in custody. The quality of this attack suggests that the attackers, like those in Paris, may have had ISIS support, but we are not sure. Are they another version of the Abaaoud network? Did the attackers all spend time in Syria? Where did their orders come from? Is there evidence of communications with ISIS while they were in Turkey?

Authorities in Bangladesh have identified the attackers in Dhaka and should be able to indicate whether they also spent time in Syria and if there is any evidence that they took orders from ISIS, or were homegrown terrorists inspired by ISIS. The same is true of those who carried out the attacks in Jeddah, Medina and Qatif in Saudi Arabia.

Political agendas invariably complicate analysis. Some government officials may wish to downplay the homegrown aspect of the threat and instead blame all terrorist attacks on a central command center in Syria. The idea of a central command is tantalizing. During the Vietnam War, the United States spent years searching for the enemy's "Pentagon," a central command center believed to be located somewhere in western Vietnam or Cambodia. It was never found and it is not certain that any such physical headquarters ever existed. Adventure films end more satisfyingly with the hero escaping as the headquarters of some evil enterprise blows up in the background.

Other officials may wish to portray all of the attacks as an escalating terrorist campaign, which, in turn, calls for an escalation of allied military operations to quickly crush ISIS or requires increased security measures at home. According to this view, the attacks prove that current efforts are not working, or are not working fast enough. In contrast, still others will prefer to portray the attacks as the death throes of an increasingly desperate ISIS that is losing ground. In other words, the attacks are evidence that current military efforts are succeeding.

Or some may wish to portray the attacks as an escalating terrorist threat posed by Islamic radicalism in order to support broader biases against Islam or immigration, and the admission of Syrian refugees in particular. This interpretation makes no distinction between a strategic decision by ISIS and a troubled shooter in Orlando — all manifest the same threat.

Each interpretation will have different political and policy consequences. This is not to suggest that the intelligence services will bend information to support political positions, but rather that — given the reality of incomplete, inconclusive and sometimes contradictory information — political players will have ample opportunities to portray these events in a way that suits their agendas.

Few observers are likely to be satisfied by a messy, but possibly more realistic analysis, which suggests that the recent attacks reflect a combination of ongoing and not necessarily related campaigns in Syria, Iraq and adjacent countries; entrepreneurial terrorists using the space provided by ISIS as a launching pad for their own jihadist ambitions; scattering foreign fighters heading back home to carry on the fight; ISIS exhortations to local supporters to take up arms; and the appeal of ISIS ideology to angry and often troubled individuals pursuing their own trajectories.

Jenkins is a senior adviser to the president of the nonprofit, nonpartisan RAND Corporation and director of the National Transportation Security Center at the Mineta Transportation Institute.

This commentary originally appeared on The Hill on July 11, 2016. Commentary gives RAND researchers a platform to convey insights based on their professional expertise and often on their peer-reviewed research and analysis.