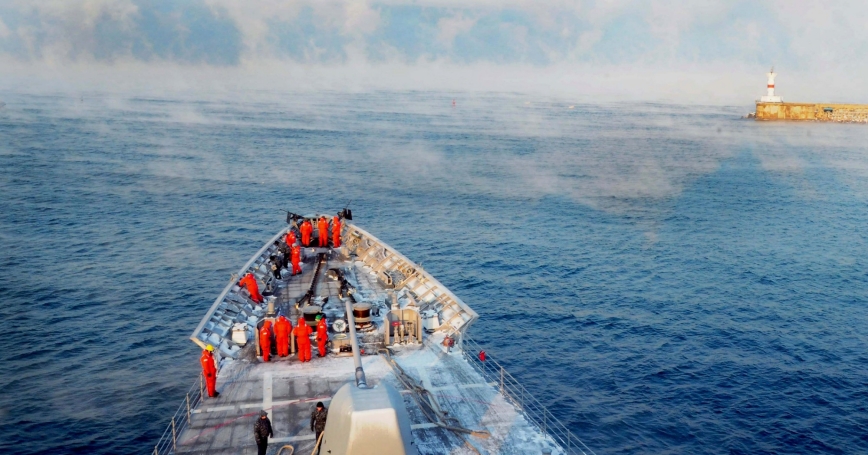 Ukrainian and U.S. sailors aboard the guided-missile cruiser USS Vella Gulf work together on the forecastle of the ship as it departs Sevastopol, January 30, 2012

The U.S. and NATO response to Russia's more assertive policy in Europe since 2014 has focused heavily on deterring possible Russian threats to the Baltic region. However, Russia is giving increased priority to expanding its military power and influence in the Black Sea area. As allies take steps to strengthen defense of the Baltic region, they need to pay increased attention to enhancing security and deterrence in the Black Sea area.

Russia's illegal annexation of Crimea has shifted the military balance in the Black Sea more strongly in its favor and significantly expanded Russia's strategic footprint. In addition to obtaining full control of Sevastopol, the finest natural harbor in the Black Sea, Russia also gained control of three other former Ukrainian naval bases in Crimea.

The Russian Black Sea Fleet is scheduled to undergo a major overhaul and modernization. Russia announced plans to spend $2.4 billion over the next four years to bolster the fleet, including procurement of more modern surface ships and submarines outfitted with advanced cruise missiles, as well as integrated air-defense and amphibious-landing capacities.This enhancement of the Black Sea Fleet will strengthen Moscow's ability to project power in that region and expand its influence in the eastern Mediterranean, Balkans and Middle East.

The Black Sea region is rife with potential flashpoints that threaten regional security.

The Black Sea region is rife with potential flashpoints that threaten regional security. The situation in Ukraine is particularly worrisome. While the threat of Russian military intervention has receded for the moment, the danger of a conflict between Russia and Ukraine persists. Ukraine is vulnerable to Russian pressure and subterfuge. Its economy is in dire straits and remains heavily dependent on Russian energy, especially natural gas. Some important reforms have been introduced, but Ukraine still has a long way to go in its struggle to establish a stable, independent democratic state.

Whether Ukraine succeeds or not will depend heavily on the firmness of the West's commitment and support for Ukraine's “European Choice.” In the security realm, the United States, the United Kingdom and Canada are providing valuable training for the Ukrainian armed forces designed to enhance their self-defense capabilities. NATO continues to pursue military exercises and cooperative programs to improve Ukraine's ability to work with allies and other partners on regional and global security problems.

Tensions between Turkey and Russia represent another volatile threat to regional security. Bilateral relations remain strained due to Russia's military intervention in Syria, backing of the Assad regime and political and military support for Kurdish separatists. President Recep Tayyip Erdoğan recently expressed regret for Turkey's downing of a Russian fighter jet that had violated Turkish airspace last November. But this move was driven largely by hopes of restoring lucrative tourism and economic ties that Moscow cut in the aftermath of the shootdown. Erdoğan remains deeply concerned about Russian military activities in the Black Sea region, has lamented NATO's lack of a visible military presence there and called on allies to take steps to prevent the Black Sea from becoming “a Russian lake.”

Turkey is not alone in feeling greater attention needs to be paid to Black Sea security issues. NATO allies on the western shore of the Black Sea, Romania and Bulgaria, have also expressed growing concerns about Moscow's efforts to increase its political and economic influence in their countries. Both governments have welcomed the increased U.S. military presence and exercises in the region, along with the completion of the first operational land-based NATO missile defense site in Romania.

NATO defense ministers discussed proposals last month for development of an enhanced military presence in Southeastern Europe, including creation of a multinational land brigade in Romania and additional naval deployments. These moves, if endorsed at the Alliance's Summit in Warsaw July 8-9, would be valuable steps toward enhancing stability and security in the Black Sea region.

In addition, the Summit provides an opportunity to develop a comprehensive strategy toward the Black Sea region, working in tandem with the European Union and other regional organizations. This strategy should include maintaining a persistent NATO maritime, land and air presence in the region and additional training and exercises. The United States and European countries should do more to support regional defense cooperation in the Black Sea and help Ukraine reform and modernize its armed forces and security services.

F. Stephen Larrabee holds the Distinguished Chair in European Security (Emeritus) at the nonprofit, nonpartisan RAND Corporation and was a member on the National Security Council staff in the Carter administration.

Stephen J. Flanagan is senior political scientist at RAND and served on the National Security Council Staff in the Obama and Clinton administrations.

This commentary originally appeared on U.S. News & World Report on July 7, 2016. Commentary gives RAND researchers a platform to convey insights based on their professional expertise and often on their peer-reviewed research and analysis.