The Response to Every Terrorist Attack Cannot Be Another Checkpoint 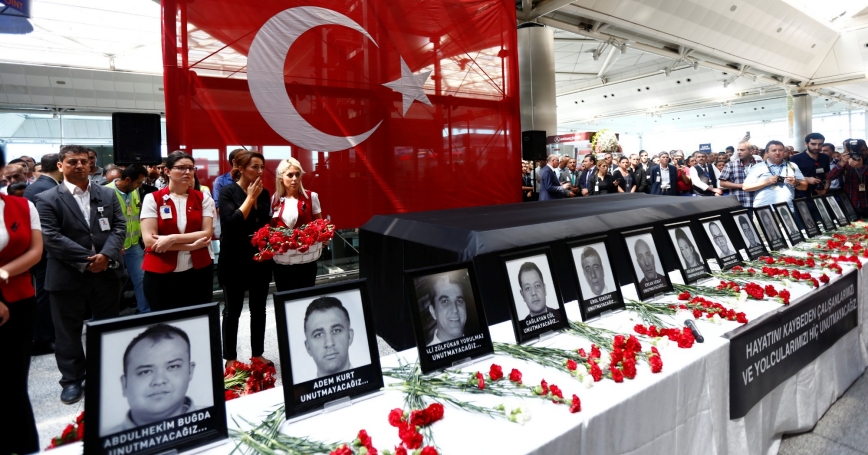 Employees at Atatürk Airport attend a ceremony for their coworkers who were killed in an attack at the airport, Istanbul, Turkey, June 30, 2016

After suicide attackers killed 10 people at the Brussels airport in March and 43 people Tuesday at Istanbul's airport, CIA Director John Brennan said that he'd “be surprised if Daesh is not trying to carry out that kind of attack in the United States.” Daesh, of course, refers to the Arabic acronym for the Islamic State in Iraq and Syria (ISIS). News headlines immediately translated Brennan's words into “Daesh likely to carry out an Istanbul airport-type attack in the United States.” Although both are scary, the two statements are very different. Brennan offers a personal view about terrorist ambitions. The second suggests a high probability of an attack. Neither offers much in the way of evidence other than it happened there, therefore it will happen here.

The attack in Istanbul will further crank up the heightened state of public anxiety in the United States following the June attack at an Orlando nightclub. And, of course, no one should say that terrorists cannot attack an airport in the United States. Relatively recent history is filled with attacks and near-attacks at airports.

In 1973, authorities uncovered a Palestinian terrorist plot to set off three car bombs in New York, including one at John F. Kennedy International Airport. In 1974, an explosive device planted by a man calling himself the “Alphabet Bomber” killed three and injured 36 at the Los Angeles airport. In 1975, a terrorist bomb killed 11 people and injured 74 at New York's LaGuardia Airport. In 1982, Armenian terrorists planted a bomb at the Air Canada cargo building at the Los Angeles airport; the group was under surveillance and the bomb was defused. Another Los Angeles airport attack was thwarted in 1999 when suspicious U.S. Customs agents intercepted a terrorist on his way to bomb it as part of a broader al Qaeda plot to carry out terrorist attacks in the United States, Jordan and Yemen. In 2002, an extremist opened fire at the Los Angeles airport's international terminal, killing two. In 2007, authorities uncovered a jihadist plot to blow up fuel storage tanks, terminals, and the underground web of fuel pipelines at JFK Airport. In 2013, a lone gunman opened fire at the Los Angeles airport, killing a Transportation Security Administration screener. Later that year, an FBI undercover operation resulted in the arrest of a lone jihadist who intended to bomb the Wichita, Kansas airport.

The lengthy list of attacks and plots is instructive. Attacks on airports are not a new phenomenon, but go back to the early 1970s. Terrorists remain obsessed with attacking aviation targets. Increased security has made it more difficult to hijack or sabotage airliners, but the public portions of airports, check-in counters and baggage pickup areas, are open public spaces.

More than half of the plots targeting airports were uncovered and thwarted by the authorities. In fact, nearly 90 percent of all jihadist terrorist plots in the United States since 9/11 have been thwarted as a result of intelligence efforts. Intelligence is our first and most effective line of defense.

Three of the four post-9/11 attacks were inspired by jihadist ideology. Both al Qaeda and ISIS continually exhort followers in the United States to carry out attacks here. America's Muslims have overwhelmingly rejected these calls to action. But the ideology has also become a conveyer for individual discontent, and a magnet for disturbed and angry individuals. Some have responded and, despite increased intelligence and security measures, some will get through.

As in the case with past incidents, the Istanbul attack will renew calls to extend existing security screening to the front door of the terminals. But screening passengers before they board airplanes and protecting airport terminals are two very different tasks. Passenger screening is designed to keep weapons and explosives off airplanes. Screeners are unarmed and cannot engage shooters. That is the role of airport police.

Security checkpoints at entrances are intended to keep gunmen and bombers out of the terminal. They would have to be extended to the baggage pickup areas, since these also have been targets of terrorist attacks. In response to an increasing terrorist threat, security screening had been set up at the entrance to Istanbul's international terminal in an attempt to prevent attackers from deeply penetrating the terminal. But checkpoints create bottlenecks and queues of people waiting to get through them, which then become an easy target. In one sense, Istanbul's security measures worked and the shooting at the front door allowed passengers inside to flee — while they could not prevent casualties, worse casualties might have occurred if the terrorists had been able to slip unnoticed into the busy terminal.

While public apprehension is understandable, the response to every terrorist attack cannot be the creation of another security perimeter. Will a new security perimeter create new vulnerabilities? Will it merely shift the risk to other equally vulnerable places where people gather?

Public places are hard to protect. The terrorist network responsible for the attacks in Paris in November and in Brussels in March targeted a museum, a train, restaurants, a sports arena, a concert hall, an airport terminal and a Metro station. The group also contemplated attacks on churches and a shopping mall. Deprived of one target, terrorists merely find others.

The correct response to Istanbul by U.S. leaders is to point out that such an attack is precisely why the United States and its allies are engaged in an effort to destroy ISIS, al Qaeda, and other like-minded fanatical groups. People need to understand that this will be a difficult, long-term effort and that, while intelligence efforts to uncover terrorist plots and arrest terrorists will continue, Americans have to realistically accept the risks they face.

Fortunately, these risks remain minuscule. In the nearly 15 years since 9/11, terrorists in the United States have managed to kill a few more than 100 people. Of course, that number is not acceptable, and anger is appropriate. It should reinforce our resolve. It demands courage and continued commitment to the values we celebrate on July Fourth.

Brian Michael Jenkins is a senior adviser to the president of the nonprofit, nonpartisan RAND Corporation and director of the National Transportation Security Center at the Mineta Transportation Institute.

This commentary originally appeared on The Hill on July 1, 2016. Commentary gives RAND researchers a platform to convey insights based on their professional expertise and often on their peer-reviewed research and analysis.