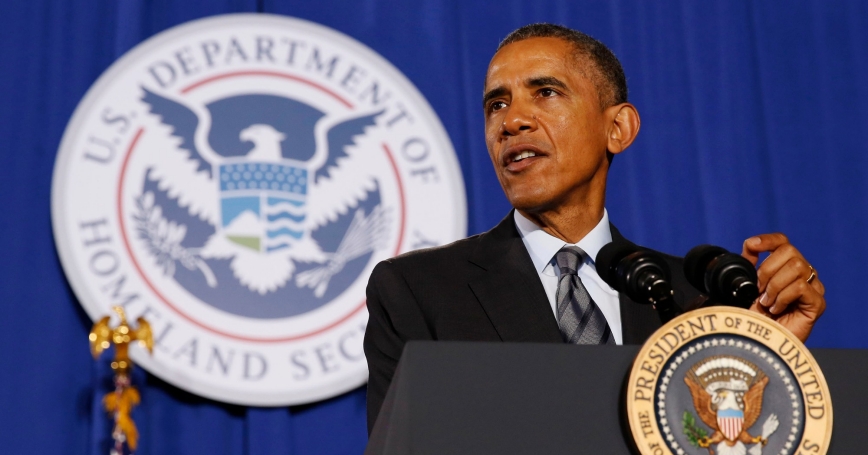 U.S. President Barack Obama speaks about the FY2016 budget at the Department of Homeland Security in Washington, February 2, 2015

President George W. Bush took office with an ambitious domestic agenda, but the 9/11 attacks changed his priorities and made him a war president. President Barack Obama also entered office committed to domestic goals, amid the country's most serious economic crisis since the Great Depression. There were no new 9/11s, but plenty of terrorist adversaries. While he will be judged in part for his domestic achievements during his eight years in office, the actions Obama took, and didn't take, in the realm of counterterrorism are a major component of his legacy.

It is a controversial one. Critics have portrayed the president as weak, vacillating, overly cautious and unwilling to recognize the threat posed by radical Islamists — even resistant to uttering the term. This hesitation, critics charge, makes bad situations worse and encourages aggression by America's foes. Had the president moved more quickly to bring down the Assad regime in Syria or been less tentative in his support of Syria's rebels, ISIS would not have risen so forcefully, they claim.

Homegrown terrorism increased on Obama's watch, with attacks in Fort Hood, Boston, Chattanooga, San Bernardino and Orlando. Even though the casualties in these attacks were exponentially less than those in 2001, opinion polls indicate that Americans are almost as worried about terrorism now as they were immediately after 9/11.

Criticism of Obama often reflects increasingly partisan domestic politics. But the president himself would likely agree that he has been careful to avoid additional military adventures.

Obama can claim credit for ordering the military raid that killed Osama bin Laden ... and for pursuing an aggressive policy of drone strikes and special operations aimed at taking out terrorist commanders.

Obama can claim credit for ordering the military raid that killed Osama bin Laden — to many, his only significant counterterrorism achievement — and for pursuing an aggressive policy of drone strikes and special operations aimed at taking out terrorist commanders.

Presidents also get credit for ending unpopular wars and bringing American troops home. President Dwight Eisenhower entered office promising to end the Korean War. President Richard Nixon was determined to get the United States out of the Vietnam War.

Obama wanted to end U.S. participation in America's two longest wars, in Afghanistan and Iraq, both of which were protracted insurgencies. Instead, a deteriorating military situation obliged the president to order more troops to Afghanistan. He attempted to mitigate the buildup by simultaneously announcing a timetable for total withdrawal, which he was forced to abandon. Many observers criticized as a mistake his decision to withdraw all American troops from Iraq. It allowed the new Iraqi government to create a sectarian regime (alienating the country's Sunni population) and replace competent Iraqi commanders with regime loyalists. Faced with an ISIS offensive in 2014, the Iraqi army collapsed, forcing the United States to return to the theater.

As a result, Obama's successor will inherit the two conflicts.

The president, however, has remained determined to avoid putting “boots on the ground” to fight terrorists abroad — as many have demanded. As he learned in Afghanistan, once the troops are in, it is difficult to get them out. Air power offered a safer option, but requires a capable ground force to be effective, demanding the deployment of U.S. personnel. More than 6,000 American troops are reportedly back in Iraq and Syria.

The administration's campaign against the Islamic State is an example of preventive war. ISIS murdered American hostages but, unlike al-Qaida, did not declare war on the United States or carry out terrorist attacks on U.S. soil, instead exhorting followers to do so. America's objective is to prevent the Islamic State from becoming a launching pad for terrorist strikes on the United States.

Using drone strikes to kill terrorist commanders began with the previous administration, but became a major component of Obama's counterterrorist efforts. The strikes enabled the United States to directly attack terrorist organizations without taking on counterinsurgency or nation-building missions. Drone strikes also remain directly under White House control. With advice from the intelligence community and military commanders, the president determines the target. As Obama has said, “I am pretty good at killing people.” A future president may not want such direct involvement.

Special operations have continued to play an increasingly important role in U.S. military strategy. These are less the traditional deployment of Green Berets to work with local armies and irregular forces, and involve more kinetic operations — high-tech commando raids. They are preferred to sending large numbers of Americans into combat and they allow the White House to keep a tighter rein on involvement.

America's stance on hostage situations returned to center stage during the Obama administration. The U.S. government does not pay ransom or make concessions to terrorists holding hostages, but does not outlaw private negotiations. Beheadings of American hostages held by ISIS prompted the president to order a review of procedures, which led to improved coordination of government efforts. Official policy did not change, although some erroneously thought it did.

Obama was accused of violating the no-concessions policy when the United States exchanged prisoners for an American private held by the Taliban, although trading prisoners for American military personnel is long accepted and not considered a violation of U.S. policy. The issue resurfaced when it was reported that the United States had returned to Iran funds frozen in 1979 in return for the release of American prisoners. Again, U.S. policy for dealing with terrorist kidnappings was not violated. Yet, it was portrayed as paying ransom by the same critics who had chastised the president for not retrieving all of the American prisoners.

Obama was determined to close the terrorist detention facility at Guantanamo Bay, which many felt had become a national embarrassment, but he failed to do so. Flawed military commissions resolved only a handful of cases, and persuading other countries to accept detainees proved difficult. Transfers to the United States were blocked, mainly by the president's political opponents who saw closure attempts as a criticism of the previous administration. Guantanamo will survive the administration.

In asserting his executive authority to justify military actions abroad and intelligence collection measures at home, Obama, like his predecessor, has pushed the edges. It is unlikely to be dismantled by the next president.

Obama's days as counterterrorism-in-chief may be coming to an end, but history has only begun to take measure of his performance.

Brian Michael Jenkins is a senior adviser to the president of the nonprofit, nonpartisan RAND Corporation, and the author of the recent RAND report "How the Current Conflicts Are Shaping the Future of Syria and Iraq."

This commentary originally appeared on The Mark News on August 22, 2016. Commentary gives RAND researchers a platform to convey insights based on their professional expertise and often on their peer-reviewed research and analysis.