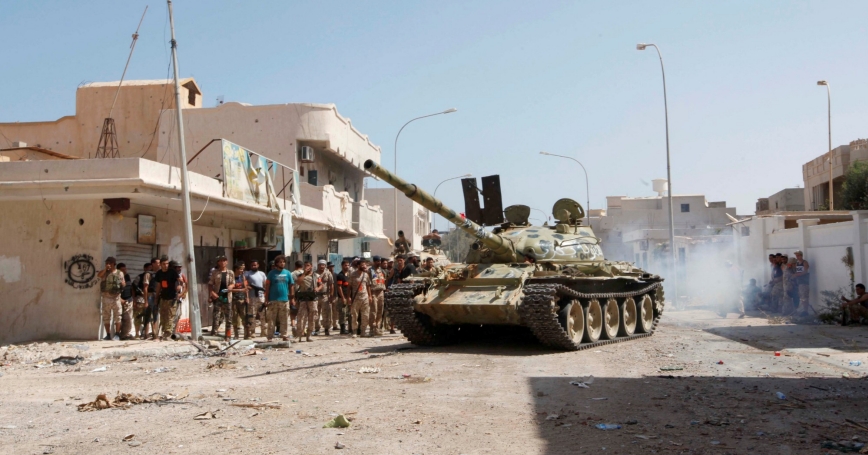 Fighters from Libyan forces allied with the U.N.-backed government take position during a battle with Islamic State militants in Sirte, Libya, September 22, 2016

The recent removal of dangerous chemical weapons precursors from Libya prevented the Islamic State group from adding these heinous weapons to its arsenal of terror. The Libyan Government of National Accord sought the help of the Organization for the Prohibition of Chemical Weapons when it feared Islamic State group militants were advancing towards a facility that contained these deadly chemicals. Preventing the Islamic State group from adding deadly chemicals to its grisly cache of weapons in Libya is an extremely important counterterrorism success. Unfortunately the same has not been true in Syria.

U.S. Director of National Intelligence James Clapper noted (PDF) in congressional testimony that the Islamic State group's use of chemical warfare agents in Syria is the first time a terrorist group demonstrated this capability since the 1995 Japanese cult Aum Shinryko used sarin on the Tokyo subway. Since the Toyko attack, terrorists have crashed passenger airplanes into the World Trade Towers; taken students hostage on the first day of school in Breslan, Russia, killing hundreds; and beheaded scores of hostages in Iraq. Terrorists have certainly talked about using poison, disease and radioactivity as weapons, but generally, they have pursued other weapons that were more readily available and easier to deploy.

Over the course of the last several months, the United States and coalition partners fighting both groups have bombed suspected Islamic State group chemical weapons store houses and production facilities. Earlier this week, U.S. Air Force Lt. Gen. Jeffrey Harrigian said in a press conference that coalition forces had struck a pharmaceutical plant that the Islamic State group was using to produce chemical agents. This will certainly curb the Islamic State group's and the Nusra Front's chemical weapons production efforts for now, but the long-term impact is uncertain.

But what may have led to these groups doing what no other terrorist group has done in the last 21 years? In a word, opportunity.

As the Islamic State group and the Nusra Front seized territory in Syria and northern Iraq, they came upon military sites where chemical munitions were hidden, abandoned or lost. In their land grab, they also captured industrial facilities with toxic chemicals. When these toxic capabilities became available, they used them. Tragically, the victims of these indiscriminate weapons were generally innocent civilians.

Corralling and securing exotic weapons and toxic materials is not always a priority when forces are engaged in heated conventional battle, but it should be.

Corralling and securing exotic weapons and toxic materials is not always a priority when forces are engaged in heated conventional battle, but it should be. The late al-Qaida leader Osama bin Laden's interest in toxic weaponry never got beyond testing and some crude efforts at production, but when U.S. forces invaded Afghanistan and overthrew the Taliban regime, al-Qaida's chemical and biological weapons efforts came to an abrupt halt. Libyan leaders have wisely taken a preventative action on the remaining chemical weapons left over from Libyan dictator Moammar Gadhafi's chemical weapons program.

Recent U.S. and coalition military action has likely forestalled use of toxic chemicals by the Islamic State group and the Nusra Front, but it has probably not eliminated it. Given how many of these toxic industrial chemicals are available at industrial sites in the region, this would be a difficult challenge complicated by the potential for collateral damage. Nonetheless, for the sake of protecting civilians, reducing the opportunity for these groups to obtain chemical weapons should be a priority as the U.S. and coalition military campaign continues.

John V. Parachini is a senior policy analyst at the nonprofit, nonpartisan RAND Corporation and the director of the RAND Intelligence Policy Center.

This commentary originally appeared on U.S. News & World Report on September 23, 2016. Commentary gives RAND researchers a platform to convey insights based on their professional expertise and often on their peer-reviewed research and analysis.