Can the Islamic State Lose Mosul and Still Win? 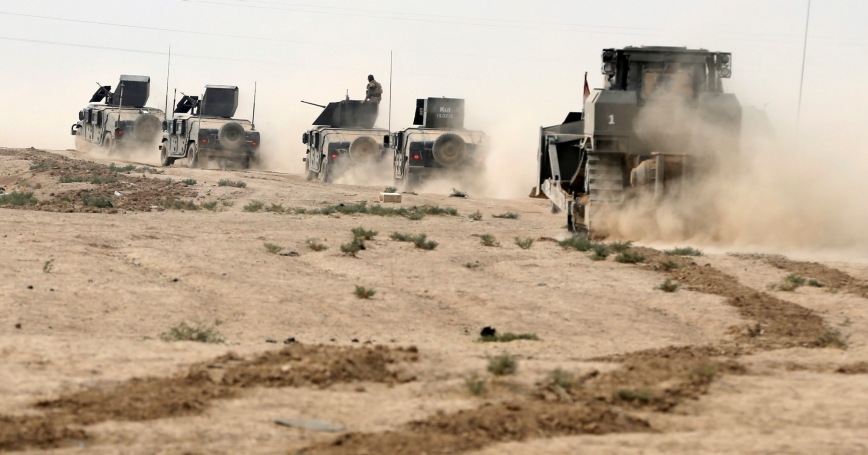 Mosul was the first major Iraqi city conquered by the Islamic State during its blitzkrieg in the summer of 2014, and its loss would be a serious blow for a group that claims it will create a pan-Islamic caliphate based in the Middle East. But past insurgencies suggest it is far too early to count the Islamic State out. There's still plenty of time for it to follow in the footsteps of other successful insurgent groups.

This year certainly hasn't been kind to Abu Bakr al-Baghdadi's organization. The Islamic State has lost roughly 50 percent of the territory it once controlled in Iraq, according to U.S. government estimates. In neighboring Syria, the Islamic State has lost roughly a quarter of the territory it once controlled and has been pushed out of key areas along the Syrian-Turkish border, such as Manbij and Jarabulus. The group still retains some territory in Iraq and Syria, particularly along the Euphrates River. But its land is shrinking, its finances are in perilous shape, and its pool of foreign fighters is dwindling and suffering from low morale.

But the Islamic State is not the first insurgent group to face setbacks like these. Since World War II, there have been nearly 200 insurgencies around the world. Together, they provide a useful historical lens to view what may lie ahead for the Islamic State. Above all, they show that the arc of insurgencies rarely moves in one direction. The fortunes of insurgent groups often wax and wane depending on their ability to establish sanctuaries, adapt their strategies, and take advantage of local grievances. Based on historical precedent, there are several ways the Islamic State will likely attempt to weather the storm.

Insurgent groups that lose territory generally need to find sanctuaries that allow them to rest, resupply their depleted forces, and plan future operations.

First, insurgent groups that lose territory generally need to find sanctuaries that allow them to rest, resupply their depleted forces, and plan future operations. In some cases, these safe havens are outside the country. In Afghanistan, the Taliban's leadership and many of its fighters fled to neighboring Pakistan after their defeat in 2001 at the hands of U.S. and Afghan forces. Over the next several years, the Taliban used its safe havens in Pakistan to restart the war in Afghanistan, where it remains a significant threat to the Afghan state today. Similarly, Fidel Castro and his surly band of communist rebels suffered a debilitating defeat in July 1953 against the Cuban government in the city of Santiago de Cuba. But Castro eventually reorganized in Mexico, plotted his next steps in relative security, and eventually overthrew the government of Fulgencio Batista in 1959.

Sometimes adequate sanctuaries are available inside the country. In Somalia, al-Shabab lost virtually all of the territory it once controlled following military operations by the African Union Mission in Somalia, Somali government, allied clan militias, and U.S. forces from 2011 to 2015. But al-Shabab found a sanctuary in the Jubba River valley in southern Somalia among allied clans, and it has since waged a violent terrorist campaign in Somalia and neighboring countries like Kenya.

Islamic State leaders already appear to appreciate the importance of sanctuaries. Where the Islamic State has already lost territory in Iraq, such as in Ramadi and Fallujah, its fighters have melted away into the dense agricultural and desert areas around urban centers. Operating out of these jazirah (“isolated”) areas, the Islamic State could replicate the model it perfected a decade ago under the name “al Qaeda in Iraq” by sustaining itself through low-level criminal activity, storing weapons caches for extended operations, and executing a grueling murder and intimidation campaign. Islamic State fighters can also leverage the territory the group currently controls in Syria, which extends north of Raqqa and southeast along the Euphrates River to the Syrian-Iraqi border. This sanctuary was essential for the Islamic State's resurgence in 2014.

Second, insurgent groups that face more powerful adversaries generally adopt a guerrilla strategy rather than attempting to wage a conventional campaign and fight their enemies in pitched battles. A guerrilla strategy involves the use of military and political resources to mobilize a local population, conduct hit-and-run attacks rather than face the enemy directly on the battlefield, and undermine the government's will to fight. Guerrilla warfare is attractive to groups that are significantly weaker than government security forces, which is why a guerrilla campaign is sometimes likened to a “war of the flea.”

For T.E. Lawrence, the British officer and advisor to Arab insurgents against the Ottoman Empire, guerrilla campaigns were the sine qua non of insurgent warfare, and mobility and hit-and-run attacks were their essential tactic. He wrote in The Evolution of a Revolt: “Granted mobility, security (in the form of denying targets to the enemy), time, and doctrine (the idea to convert every subject to friendliness), victory will rest with the insurgents, for the algebraical factors are in the end decisive.”

Most successful insurgent groups have utilized guerrilla strategies. In Guinea-Bissau, Amilcar Cabral and his African Party for the Independence of Guinea and Cape Verde (PAIGC) adopted a successful guerrilla campaign to win independence from Portugal. The PAIGC spent more than a decade conducting hit-and-run attacks against Portuguese forces until Guinea-Bissau became independent from Portugal in 1974. In South Africa, African National Congress (ANC) leaders began preparations in 1963 for Operation Mayibuye, which involved organizing and implementing a guerrilla strategy against the government. It was orchestrated by the ANC's military wing, Umkhonto we Sizwe, and contributed to the end of the apartheid government in South Africa by 1994.

Today, the Islamic State faces a powerful coalition of adversaries that includes seasoned Kurdish Peshmerga, Iraqi security forces, Sunni Arab militias, Shiite militias, and U.S. and other coalition military power. If the Islamic State has any hope of surviving the loss of Mosul, its leaders will likely shift to a classic guerrilla campaign that includes ambushes, raids, sabotage, targeted assassinations, and suicide attacks. The Islamic State waged a successful conventional campaign in 2014 when its fighters from Syria surged across the border into Iraq's Anbar province in large columns of mechanized and even armored vehicles, joining operatives that had already been active in Fallujah and Ramadi. Clashes often took the form of set battles, trench warfare, and town sieges. But the Islamic State no longer faces such parity, making guerrilla warfare its only viable option.

Third, classic insurgent theorists like Mao Zedong, the Chinese leader and insurgent philosopher, have long stressed the importance of leveraging political and other grievances. “Without a political goal,” Mao wrote, “guerrilla warfare must fail, as it must if its political objectives do not coincide with the aspirations of the people.” Groups need a cause that charismatic leaders can use to help mobilize local populations. Mao likened the local population to water and insurgents to fish that need water to survive.

Successful insurgents have effectively leveraged local grievances. In Vietnam, the Viet Cong exploited hatred of a government they viewed as hopelessly corrupt, oppressive toward rural peasants, and too closely aligned with U.S. “imperialist” forces. In Nicaragua, the Sandinistas regularly visited houses in rural areas to exploit social and economic grievances. “The first thing we would ask,” recalled one Sandinista guerrilla, “was if they owned the land they lived on, and the answer was always no, it belonged to 'rich folk.'” Their goal was to influence rural peasants by directing their anger at the wealthy landowners and the government, which they did on their way to overthrowing the government of Anastasio Somoza Debayle in 1979.

Perhaps the most vulnerable component of the current campaign in Iraq against the Islamic State is the failure to address Sunni Arab grievances. Beginning around 2010, the government of Nouri al-Maliki initiated a targeted campaign to consolidate his hold on power at the expense of Sunni Arabs. He replaced competent Sunni Arab and Kurdish military officers with loyal but incompetent Shiite ones; he used the courts and security forces to harass and pursue Sunni Arab politicians; and his security forces violently suppressed Sunni protests. At the same time, Maliki aligned more closely with Iran.

These grievances continue under Maliki's successor, Haider al-Abadi. Unless Sunni disenfranchisement is more effectively addressed in Iraq, there will likely be a suitable environment for the survival — and perhaps even the revival — of the Islamic State.

The Islamic State has often scoffed at historical tenets of insurgent warfare, killing and intimidating local populations rather than mobilizing them. But if the Islamic State can adapt, the fall of Mosul may simply be the beginning of a new phase of a generational conflict.

Seth G. Jones is director of the International Security and Defense Policy Center at RAND and an adjunct professor at Johns Hopkins University's School of Advanced International Studies. He is the author, most recently, of Waging Insurgent Warfare: Lessons from the Vietcong to the Islamic State (Oxford).

This commentary originally appeared on Foreign Policy on October 31, 2016. Commentary gives RAND researchers a platform to convey insights based on their professional expertise and often on their peer-reviewed research and analysis.