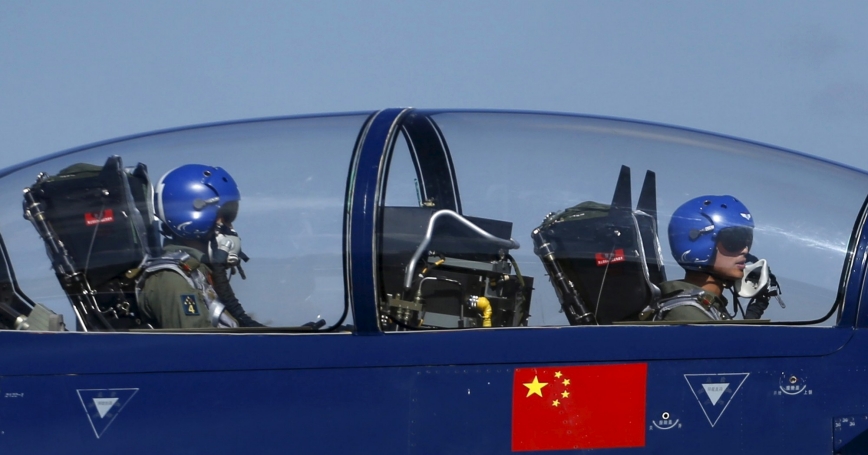 Pilots of China's J-10 fighter jet from the PLAAF Aerobatics Team prepare before a media demonstration at the Korat Royal Thai Air Force Base, November 24, 2015

In a seminal RAND Project Air Force report written over two decades ago, entitled “Russia's Air Power at the Crossroads” (PDF), the author concluded that the Soviet air force had achieved marked improvement in the tactical skills of its fighter pilots, yet most pilots were still “bound by a heavily scripted tactical repertoire that was all but completely dominated by ground control.” Such scripted training scenarios, the report continued, “left [pilots] little room for exercising the free-form initiative and adaptability that had long been a hallmark of Western tactical air practice.”

Similar things can be said about today's People's Liberation Army Air Force (PLAAF). The PLAAF is one of the largest and most capable forces in the world in terms of quantity and technology, but Western analysts have long questioned its rigid, outdated approach to pilot training—relying heavily on ground control and scripted environments to achieve training objectives. The prevailing view among many Western observers is that Chinese fighter pilots lack the tactical mindset to engage and prevail in a dynamic, unscripted combat environment.

Our recently released report on PLAAF training suggests that narrative may be changing. Our analysis found that the PLAAF has initiated system-wide reform to train fighter pilots in the skills necessary to “fight and win” against potentially superior military competitors like the U.S. At the heart of this reform is an effort to train officers under what Chinese military leaders refer to as “actual combat conditions,” which include, among other things, nighttime battle training, complex electromagnetic conditions, special geographical environments and extreme weather conditions.

The PLAAF has been experimenting with giving pilots the responsibility to create their own flight plans with full autonomy over their sorties—from starting their engines to changing navigation routes and flying tactics in the air—without strict control from a commander in the control tower. This type of autonomy represents a significant departure from past practice, which emphasized reliance on ground control. PLAAF pilots are also increasingly evaluated using real-time video feed playback and other flight-data recordings previously unavailable to aviators. Video playback offers an important teaching tool to correct mistakes and provides an objective means of analysis for flight leads and instructors in assessing pilots' performance, no matter their experience or skill level.

The PLAAF has also redoubled attempts to instill discipline in its pilots by offering honest assessments of shortcomings. Such efforts include professionalizing unit training through adherence to less-scripted, combat-realistic training for the battlefield rather than the test. For example, during a November 2013 year-end training event at a Guangzhou air regiment, some of the aircraft identified to take part in the test had “just returned from seasonal changeover maintenance,” and four of the pilots chosen to participate were “ill-prepared” for examinations because they had just completed “aircraft transition training,” according to reports in the Chinese air force newspaper Kongjun Bao. The regiment leaders nonetheless decided to proceed with the assessment as planned, reminding the pilots that evaluations were meant to gauge “actual combat ability,” not simply who would obtain “high marks.”

PLAAF pilots still lack the ability to adapt to rapidly changing battlefield conditions and make autonomous decisions on the fly.

When compared with their U.S. Air Force counterparts, however, clear deficiencies remain among PLAAF pilots in the area of combat tactics and skills. PLAAF pilots still lack the ability to adapt to rapidly changing battlefield conditions and make autonomous decisions on the fly. Such skills remain new to many PLAAF pilots accustomed to having almost all of their tactical maneuvers dictated by commanders in the control tower. For example, one Kongjun Bao report noted this deficiency in flight leads taking over from ground control:

Ground commands often are not able to keep up with the complex and changeable air situation. Pilots relied too much on the commands and guidance from the ground, which was not conducive to enhancing the enthusiasm and initiative of airborne combatants.

Our findings also highlight an inability among some PLAAF pilots to hit ground targets successfully upon receiving inflight changes to flight trajectories or plans, as well as a reluctance among pilots to take risks for fear of making mistakes or out of safety concerns.

Our report supports the notion that the PLAAF is fully aware of its shortcomings in pilot combat skills and is taking steps to rectify many of these deficiencies. However, cultivating true pilot autonomy in unscripted scenarios takes decades to hone and demands a training system that encourages honest assessments of mistakes. While the PLAAF appears to have undertaken major reform in how it trains its pilots, success will ultimately depend on breaking the service's deep-seated institutional and cultural barriers.

This commentary originally appeared on Aviation Week & Space Technology on October 14, 2016. Commentary gives RAND researchers a platform to convey insights based on their professional expertise and often on their peer-reviewed research and analysis.