This report seeks to assess People's Liberation Army Air Force (PLAAF) pilot proficiency by examining training activities at aviation units with a focus on training guidance and practices at the theoretical and operational levels. The study also examines the training of pilot instructors as well as the operational competency and weaknesses of aviators and of the PLAAF training system as a whole. 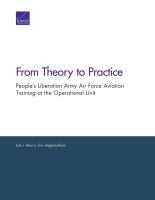 From Theory to Practice

The People's Liberation Army Air Force (PLAAF) has embarked on a major institutional reform to train and equip a modern, professional aviator corps. At the heart of this reform is an effort to train officers under what the People's Liberation Army refers to as "actual combat conditions" (实战条件). Such an emphasis reflects an acknowledgment by senior leaders that the PLAAF, and by extension the entire Chinese armed forces, is ill prepared to "fight and win" wars against potentially superior military competitors and must therefore reinvigorate training programs to meet the missions that the Chinese Air Force may be called on to execute.

The research described in this report was prepared for the United States Air Force and conducted by RAND Project AIR FORCE.