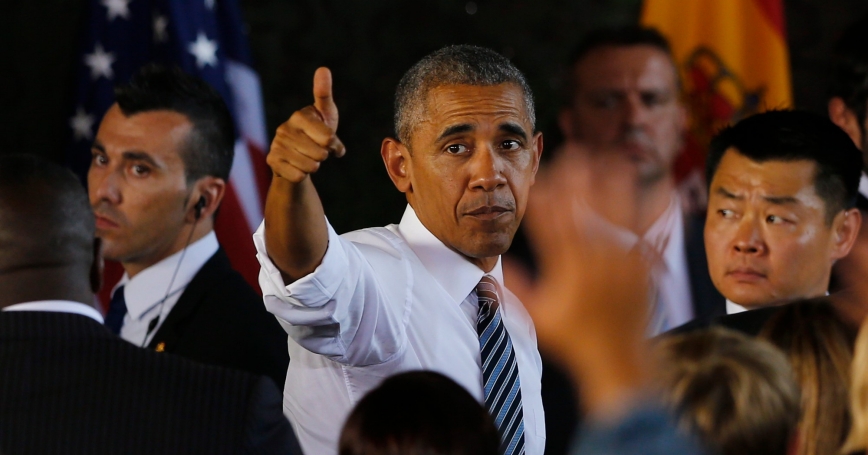 U.S. President Barack Obama gives a thumbs up after his speech at the Rota naval airbase, near Cadiz, Spain, July 10, 2016

Barack Obama struck a chord with Germans eight years ago in Berlin, when he promised adoring crowds a sharp break with the Bush era. But as his own era ends, the bloom is off the rose in some German foreign policy circles. Germans who once cheered Obama now complain about NSA spying, the failure to close Guantanamo, and what they see as a mishandling of Syria.

In retrospect, though, it's hard to imagine a US president being more European — and, specifically, more German — on key foreign policy issues. The next American president will likely be less tolerant of allies who call for US action yet balk at paying their fair share. Other challenges loom.

Initially, the Obama administration seemed to have limited interest in Europe. But this wasn't altogether a bad thing, especially since its foreign policy philosophy was so congruent with the thinking of so many Europeans, and especially Germans.

Obama's emphasis on what Derek Chollet, a former senior official at the Pentagon, has dubbed “the Long Game” was greatly appreciated in Berlin. Obama's reticence on military force and his defense of strategic restraint were mirrored in German circles on the left and the right, as was his emphasis on dialogue and diplomacy.

Early on, the Obama White House took important decisions on Russia that made life easier in Berlin.

The Obama White House took important decisions on Russia that made life easier in Berlin early on, ending controversial US plans for “third site” missile defense installations in Central Europe, launching a “reset” of relations with Moscow, and backing off Bush administration plans to enlarge NATO eastward.

When relations with Russia later soured, Obama's approach still jibed with that of German Chancellor Angela Merkel. On Ukraine, Obama understood the need for transatlantic as well as European unity — and appreciated the difficulties Merkel had in sustaining the latter. He let Europe take the lead with Russia over Ukraine, resisting pressure in Washington for a more forceful US role. Over the recommendations of top advisors, Obama then chose not to offer Ukraine lethal military aid, sparing Berlin a likely European crackup.

Washington and Berlin lined up on Iran, too. Rather than castigate Tehran and threaten regime change as his critics urged, Obama pursued and signed the nuclear deal. Similarly, his balanced policy toward Israel played well to a German public that sees Israel as an essential partner yet is deeply sympathetic to the Palestinians. A course of strategic restraint in Syria — although heavily criticized as “weak American leadership” by some in Germany — allowed Berlin to avoid thorny questions of how Germany might support military intervention there. Obama even backed off from his initial push for regional democracy promotion.

Germany may have sat out the 2011 Libya intervention, but the US president's willingness to lead from behind there allowed Europe to emphasize its role and responsibilities in the broader region. Obama meanwhile backed the Paris agreement on climate change, opened diplomatic relations with Cuba, and mostly kept his distance from the EU's internal problems, except when backing Merkel on Brexit or refugees.

Not everything was perfect. Beyond Guantanamo, there was scant progress on nuclear disarmament. White House Keynesians tangled with German conservatives over monetary policy and allegations that US spies had tapped Merkel's own cellphone sparked a storm of anger in Berlin. The pivot to Asia was seen as a slight. Obama's weapon of choice for global counter-terrorism operations — unmanned aerial vehicles, or drones — has become one of the most controversial legacies of his presidency and was roundly criticized.

If elected, Hillary Clinton will likely be more assertive on Russia and Syria, might revisit lethal aid to Ukraine, and could press Germany on defense spending.

But it's hard to imagine a future US president being any easier for Germany. With just weeks left to the election, Hillary Clinton looks increasingly likely to become the next commander-in-chief. She is widely expected to seek to build on the Obama administration's legacies while “leaning in” more on some key security issues. In particular, Clinton will likely be more assertive on Russia and Syria, might revisit lethal aid to Ukraine, and could press Germany on defense spending. Promoting democracy might also take on renewed priority. On the campaign trail, she has contrasted with the Obama administration's doctrine on global trade — although the possibility that she might amend that position in office remains.

Donald Trump's campaign appears to be derailing, and fast. That comes as relief to many in Berlin; Trump has backed both isolationism and a more militarized approach to foreign policy that harkens back to the early George W. Bush presidency, when Berlin and Washington's relations reached their post-Cold War nadir.

He has been relentless about Europe's defense contributions. “They're not paying us what we need,” he said in his debate with Clinton on September 28, adding, “NATO could be obsolete.” He is also skeptical of the very international organizations Germany champions, like the United Nations, the World Trade Organization, and perhaps the European Union itself. While Trump's apparent admiration for Vladimir Putin might win him some points with Putin's remaining friends in Berlin, it could undermine Merkel's investment in a tough European line on Ukraine.

All this could mean Germany is forced to take over even more international responsibility, with all the financial and diplomatic obligations that entails.

The Obama era will be remembered as the time when America's leadership role in Europe began to shift. Europeans got more freedom of action, but could no longer outsource their foreign, and especially military, responsibilities to Washington. Whoever is president next: Europe will have to do more.

This commentary originally appeared on Berlin Policy Journal on October 14, 2016. Commentary gives RAND researchers a platform to convey insights based on their professional expertise and often on their peer-reviewed research and analysis.