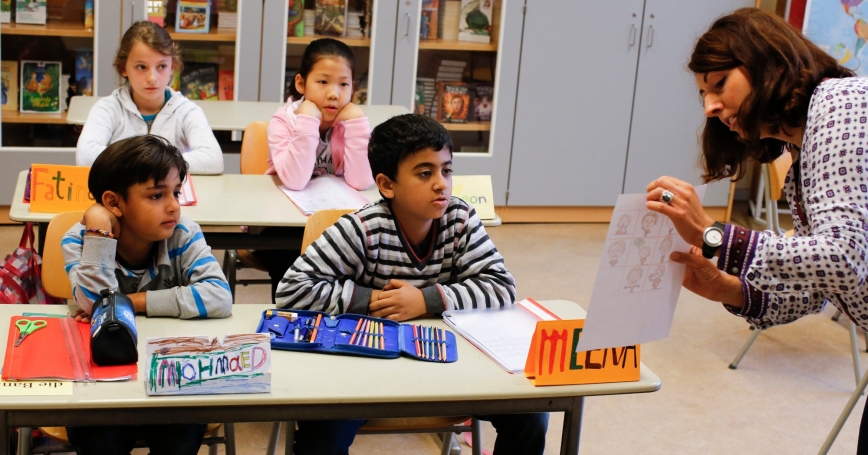 A teacher conducts a German lesson for children of a welcome class for immigrants from Syria, Egypt, and South Korea in Berlin, Germany, September 11, 2015

by Barbara Janta and Emma Harte

With migration high on the policy agenda across Europe, there is a need to consider how migrant children are integrated into education systems. In 2015, roughly 10 per cent of the EU population were born outside the country in which they reside, with children under the age of 15 comprising five per cent. Although the pattern varies across EU member states, research suggests that children with a migrant background tend to have lower educational performance and are more likely to leave school early than native children.

Limited or no command of the host society language is the most common educational barrier faced by migrant children. An Organization for Economic Cooperation and Development (OECD) report found that both first- and second-generation migrant children who started school without speaking the host country's language were disadvantaged compared to native pupils. Learning and educational performance is often hindered for these children until the language barrier is overcome. Studies have noted that migrant children perform better in school as they acquire the host country's language.

Education attainment is also linked to levels of parental engagement with the school and the child's education. Parents who themselves have limited command of the host country's language may face challenges in engaging with their children's education and wider school environment. Engagement is also linked to the socio-economic status of the parents and their own level of education. These factors can lead families to become socially isolated, which further limits the ability of parents to support their children in education.

This commentary originally appeared on New Europe on October 31, 2016. Commentary gives RAND researchers a platform to convey insights based on their professional expertise and often on their peer-reviewed research and analysis.