Al Nusra Is Stronger Than Ever 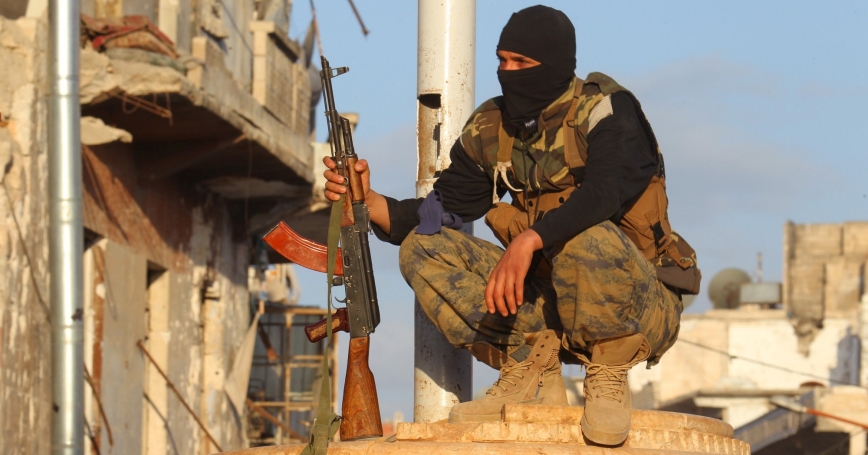 A member of the Nusra Front squats in Ariha, Syria, after a coalition of insurgent groups seized the area, May 29, 2015

Three months after its “split” from al Qaeda, which in reality is simply a feint, Jabhat Fateh al Sham (JFS), formerly known as Jabhat al Nusra, may pose a more significant long-term threat to the West than the Islamic State in Iraq and Syria (ISIS).

While the West targets ISIS, JFS is quietly laying the groundwork for al Qaeda's resurgence by “hunkering down,” rebuilding, and repositioning itself along several fronts. This should come as no surprise — al Qaeda and its affiliates are nothing if not resilient.

With approximately 10,000 fighters, JFS is now both the largest al Qaeda franchise and by many accounts, the most lethal, eclipsing the capabilities of Al Qaeda in the Arabian Peninsula (AQAP) and Al Qaeda in the Islamic Maghreb (AQIM). As a failed state on the periphery of Europe, Syria is the ideal staging ground for al Qaeda to rejuvenate its global campaign of terrorism through JFS.

Jabhat Fateh al Sham is now both the largest al Qaeda franchise and by many accounts, the most lethal.

Veteran al Qaeda leaders like Saif al-Adl are thought to be among the current leadership directing JFS strategy in Syria. A critical centerpiece of this strategy is seeking consent of locals and working to garner political legitimacy in Sunni-dominated parts of northwest Syria, where JFS has established an enclave.

This approach stands out in stark juxtaposition to ISIS's ultra-violent, scorched-earth campaign. JFS has benefited from the combined Western and Russian campaign against ISIS, as it has allowed the al Qaeda splinter to survive and thrive.

Moreover, by publicly disassociating itself from al Qaeda, JFS has attempted to maintain a lower profile with respect to its adversaries, namely the Russian-backed regime of Syrian President Bashar al-Assad and the U.S.-led coalition. The rebranding failed to convince the U.S. government, but as prominent terrorism scholars have pointed out, Washington was never the intended audience.

A major line of effort within al Qaeda's broader campaign has been establishing close ties with locals in the areas where it now operates. For the past several years, al Qaeda has been shifting fighters and resources into Syria and slowly accruing popular support among locals. JFS is focused on political and military targets and has worked to build localized bases of influence and embed its fighters into established zones of territorial control.

The change in nomenclature from Nusra to JFS serves several specific purposes. One potential outcome is that countries like Saudi Arabia, Turkey, and Qatar may feel more at ease arming or aiding the militants now that they have publicly distanced themselves, even if in name only, from al Qaeda. Qatar, in particular, has been urging such a move for months.

Another objective of the rebranding is to present JFS as a more inclusive organization, open to working with, instead of against, the myriad Syrian rebel groups aligned against the Assad regime. Compared to ISIS, JFS has been far more selective in recruiting new members, especially among the thousands of foreign fighters that have flocked to Syria since the civil war erupted five years ago. By merging with parts of the local opposition, JFS can present itself as the most representative and legitimate alternative among active jihadist groups.

Like its parent organization al Qaeda, JFS is playing the long game. Its new name allows it to portray itself as a vanguard of the Syrian people rather than an al Qaeda puppet.

Another motive of the name change is to integrate JFS within the current patchwork rebel coalition of anti-Assad fighters. If JFS successfully embeds itself within the opposition, there are serious consequences in both the short and long term. More immediately, this could prolong the conflict. In the long run, this symbiosis could lead to political legitimacy, enabling the militants to emulate the staying power that Hezbollah has demonstrated in neighboring Lebanon.

Compared to the more technologically adept and media-savvy ISIS, al Qaeda, and by extension JFS, is a more conservative and “old-school” jihadi outfit. There is little doubt that ISIS poses a significant threat to regional stability in the Middle East and has already demonstrated both a willingness and capability to strike the West. But in the grander scheme, ISIS has been compared to an infection that can be treated and contained, while al Qaeda and its affiliates are likened to a cancer that defies treatment and continues to spread.

The West should be doing everything possible to ensure that JFS and its ideological sympathizers are unsuccessful in their attempt to entrench themselves in Syria the way Hezbollah did in Lebanon. This likely means taking aggressive measures to separate or isolate jihadists from the more moderate elements within Syria's rebel opposition.

Regardless of whether Assad stays or goes, this should be an overarching goal of Western countries working to resolve the Syrian crisis.

Colin P. Clarke is a political scientist at the nonprofit, nonpartisan RAND Corporation.

This commentary originally appeared on The Cipher Brief on November 2, 2016. Commentary gives RAND researchers a platform to convey insights based on their professional expertise and often on their peer-reviewed research and analysis.