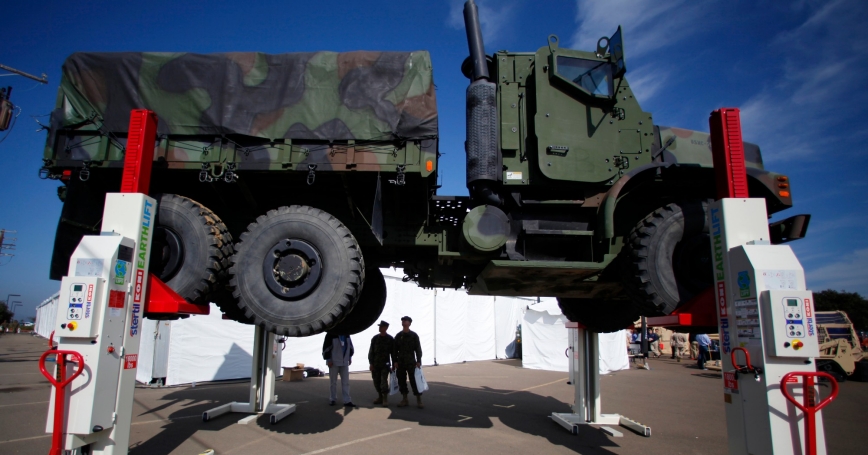 Soldiers look at a portable lifting system by Stertil-Koni at the Marine West Military Expo at Camp Pendleton, California, February 1, 2012

Since Deputy Secretary of Defense Robert Work discussed the Third Offset at a talk given in January of 2015, the concept has been the focus of numerous discussions and interpretations. It has generally been defined in defense literature as a path to a new and enduring competitive edge over America's adversaries based on advanced technology.

To find new sources of this advanced technology, Secretary of Defense Ashton Carter created the Defense Innovation Unit Experimental (DIUx) in August of 2015. Carter has said the DIUx experiment is prodding the Pentagon to take a closer look at how it engages with technology companies and the tools it uses to get new technologies into the hands of America's fighting men and women.

Technologies and their related capabilities are what creates the warfighting competitive advantage, the warfighting offset. The DIUx may well yield that advantage, but even if it doesn't, the Department of Defense (DoD) will likely still reap collateral benefits through the creation of innovative organizational structures that leverage private sector technological advances.

The development of an enduring competitive edge is easiest to understand retrospectively, but somewhat less easy to identify when looking into the future. With hindsight, it is clear that investments in nuclear capability ensured an edge over the Soviets starting in the 1950s and created a measure of strategic deterrence. This became known as the First Offset.

The Second Offset occurred in the 1970s and 1980s as advancements in space systems, communications, information technology, and material science allowed for enhancements in the capabilities of stealth and precision. This Second Offset created a level of technological superiority that endured for a couple of decades, but which has recently diminished, as the most capable U.S. adversaries made their own investments in these technologies.

For the Third Offset, it is not yet clear what investments into which technologies will enable the United States to develop a new form of superiority. Work pointed to a range of technologies in his speech, including robotics, autonomous operating guidance and control systems, visualization, biotechnology, miniaturization, advanced computing and big data, and additive manufacturing. These technologies or others may contribute to the capabilities that will make up the hoped-for Third Offset advantage. Investments are being made in capabilities including undersea systems, unmanned systems of a variety of types, enhanced human-machine teaming, advances in cyber and electronic warfare, improved munitions, and others. The exploration of new and innovative operational concepts through wargaming and modeling and simulation will also play a role.

Just as it is unclear precisely what the Third Offset will be, it is also unclear where the necessary innovation will come from. In the past, sources of innovation have included industry, the government, federally funded research and development centers (FFRDCs), and academia. We expect the same for the future. For example, long-term investments made at government run defense laboratories ensure that technologies promising for defense continue to advance, even if they lack commercial applications. FFRDCs, like those run by my own employer, engage in new concept development and use wargaming and other tools to explore which capabilities may offer interesting advantages for the warfighter. Other new technologies will come from across the spectrum of commercial industry, which is leading the advances in many or all of the technological areas identified by Work. In many cases, these innovations have not been originally developed by the largest defense contractors – Lockheed Martin, Boeing, Raytheon, and so forth – although as weapon system integrators, they certainly can be expected to adopt and adapt the resultant capabilities into their systems.

For the Third Offset effort, the DoD is deliberately reaching out to capture technological innovations being developed by commercial companies aimed at commercial applications. The DIUx is expected to capture advancements from industry – to create “spin-ons” – with the goal of leveraging the work of companies not currently serving as defense contractors. These companies may lack the insights, contacts, or process knowledge needed to do business with the DoD. DIUx opened its first hub in Silicon Valley with fanfare and a visit by Secretary Carter. A second hub soon followed in Boston, and then a presence was added in Austin. The culture of innovation in these locations is not something the DoD can replicate on its own, but it is something that the DoD can take advantage of. DIUx is one road toward this goal.

Will the Third Offset initiative and the attempts to capture new technologies from non-traditional suppliers via DIUx be effective? It may be many years before that question can be answered. But the effort itself is evidence of another form of innovation, that of creatively organizing in new ways to capture new ideas. It may be that the true innovation of the Third Offset is this organizational innovation that develops new processes to onboard and integrate cutting edge technologies from companies that had not yet found a way to contribute to the DoD.

Cynthia Cook is director of the Acquisition and Technology Policy Center, part of the RAND National Defense Research Institute, and a professor at the Pardee RAND Graduate School.

This commentary originally appeared on The Cipher Brief on November 23, 2016. Commentary gives RAND researchers a platform to convey insights based on their professional expertise and often on their peer-reviewed research and analysis.