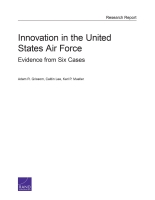 Developing innovative means to go "over not through" national strategic challenges has long been central to the Air Force's contribution to American security. In recent months, however, U.S. Air Force (USAF) senior leaders have raised the questions of whether the service is sufficiently innovative today and what can be done to make it more innovative for the future. This report assesses historical cases of Air Force innovation or apparent failure to innovate. These case studies include innovations in strategic reconnaissance (1946–1972), nuclear survivability (1950–1960), suppression of enemy air defenses (1975–1985), and precision strategic attack (1990–1999). Cases of apparent failure to innovate include close air support after World War II (1946–1951), early efforts to defeat Soviet integrated air defenses (1960–1970), and airborne high-value targeting in the post–Cold War era (1990–2001).

The Air Force Innovates Differently from Other Military Organizations

Air Force Innovation Is a Decentralized, Diffuse, and Diverse Phenomenon