Is the U.S. Abandoning the World Order It Created? 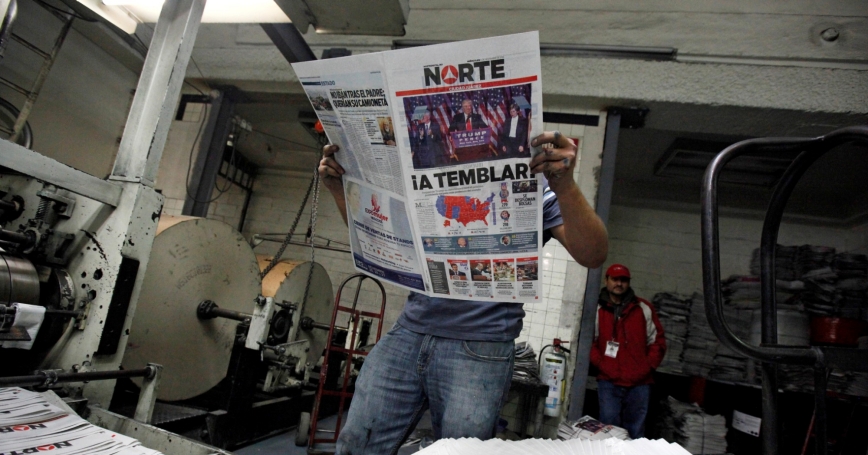 A worker reads a freshly printed newspaper with the headline "We will tremble" at the local daily Norte in Ciudad Juarez, Mexico, November 9, 2016

Beginning in the mid-20th century, the United States created and gradually expanded a world order that has provided much of mankind with unparalleled levels of security and prosperity.

The United States has benefited as well, but not as much as some, and America has also borne disproportionate costs for sustaining this order. Last Tuesday, the majority of Americans seem to have said enough; it's time for a new deal.

At the end of World War II, the United States produced and consumed nearly half the world's wealth. Over the next quarter-century, this share was reduced to a quarter, largely to the benefit of America's former adversaries and European allies.

These countries grew faster than the United States, and by the late 1970s there was growing alarm in America about their rising strength, particularly that of Japan, which enjoyed a massive and persistent trade surplus at America's expense.

European and Japanese growth rates eventually declined to or below American levels, but these were replaced by new challengers. China, India the other Asian tigers and a number of developing countries elsewhere have in recent decades expanded much faster than the United States.

Hundreds of millions of people have been lifted out of poverty. Democracy has spread from a few dozen countries on the North Atlantic to half the world.

Free trade generally, and access to the American market specifically, has driven much of this growth. American security commitments in Europe and Asia have ensured the peace.

But the United States spends more to defend these areas than the regional residents spend themselves. And the United States has also paid more in blood as well as treasure, suffering much higher casualties in Korea, Vietnam, Iraq and Afghanistan than most other members of the international coalitions that joined in these fights.

The United States may be the only nation without which the global order cannot persist.

Madeleine Albright once referred to America as the indispensable nation, by which she meant that by virtue of its size, wealth and power, the United States plays a unique role, acting as the keystone to a world order in a manner that no other state could replace. We may be about to test that proposition.

Or maybe not. Donald Trump is a deal-maker who prides himself on his negotiating skills. He will probably not simply withdraw from the North American Free Trade Agreement, impose restrictions on Chinese imports, renege on America's NATO and Asian defense commitments, back out of climate change undertakings and renounce the six-power nuclear accord with Iran. Rather, he seems likely to seek better deals.

Are such to be had? Reopening agreements allows all sides to put forward new demands. Are there are win-win outcomes to some of these possible renegotiations?

Certainly, America's partners around the world should be considering just what they might ask if President Trump seeks to reopen long-standing bargains. Perhaps the liberal global order that has brought so much security and prosperity to so many people can be updated, rather than jettisoned. But if so, there is likely to be a lot of hard bargaining on the way.

James Dobbins, a senior fellow at the nonprofit, nonpartisan RAND Corporation, served as assistant secretary of state for European affairs from 2000 to 2001 and was ambassador to the European Community from 1991 to 1993.

This commentary originally appeared on Newsweek on November 14, 2016. Commentary gives RAND researchers a platform to convey insights based on their professional expertise and often on their peer-reviewed research and analysis.