Can Trump Make a Deal with Putin? 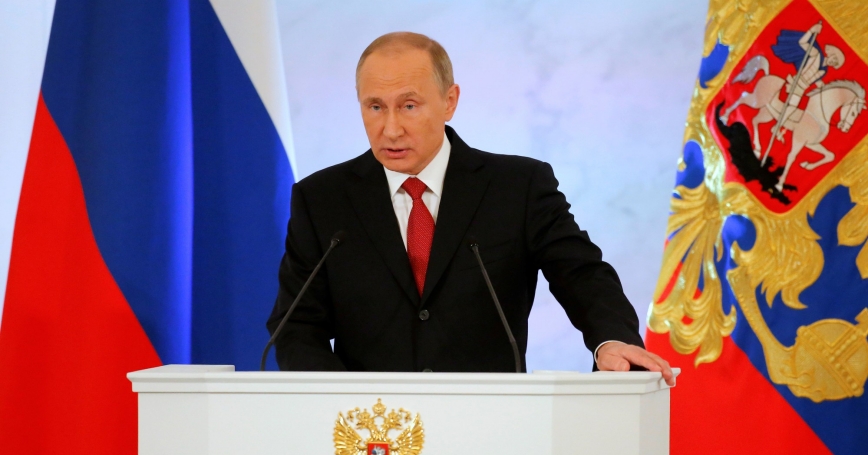 Russian President Vladimir Putin gives his annual state of the nation address at the Kremlin in Moscow, Russia, December 1, 2016

by Hans Binnendijk and William Courtney

President-elect Donald Trump's interest in improving relations with Russia is fraught with risk unless his diplomacy is up to snuff. But if executed properly, Trump's diplomacy could help reverse a destabilizing downward spiral in relations and create a vision of what normal relations might entail. Only Russia's withdrawal from eastern Ukraine would allow progress toward normalized relations.

Before meeting President Vladimir Putin, Trump should lower the risks to his presidency of potential mistakes in dealing with the seasoned Russian president. U.S. presidents have sometimes blundered abroad early in their tenure, such as President John F. Kennedy in the Bay of Pigs invasion.

Three prerequisites should guide Trump's strategy with Russia. First, he should reaffirm America's commitment to NATO, while calling for defense spending and efficiency to be the main issue at the 2017 NATO Brussels summit. Second, before meeting with Putin, Trump should visit key allies and learn their priorities while sharing his own. Third, he ought to review his strategy with congressional leaders. Many of them see Kremlin policy, from the war on Ukraine to cyberattacks to interference in U.S. elections, as hostile.

If Trump is prudent, he should seek to overcome two concerns. One is that he might be perceived as soft on Putin. On Nov. 16, Sen. John McCain, R-Ariz., warned that another reset in U.S. relations with Russia would amount to “complicity in Putin and [President Bashar] Assad's butchery of the Syrian people.” The next day Sen. Ben Cardin, D-Md., remarked that Putin's repressive policies hearkened to the “dark days of Russia and the Soviet Union.” Trump should also try to repair damage to NATO. In July, he said he would not defend Baltic allies unless they had “fulfilled their obligations to us.”

Russians seem to be tiring of wasteful wars in the Donbas and Syria, and incessant harsh anti-Western propaganda.

Trump ought not to underestimate his leverage to get a good deal. A new poll by the respected Levada Center shows that 71 percent of Russians (a 15-year high) favor closer ties and cooperation with the West. As living standards fall, Russians seem to be tiring of wasteful wars in the Donbas and Syria, and incessant harsh anti-Western propaganda.

Once Trump is prepared, what stance might he take with Putin? Trump should begin by underlining the West's opposition to Russia's aggression in Ukraine and its support of broad economic sanctions until Russian forces and proxies are withdrawn from the war-torn Donbas region in the country's east. The European-led Minsk peace process is stalled. Trump should add U.S. heft to the negotiation and boost military support for Ukraine, while reaffirming that Donbas-related sanctions will be lifted if Russia fulfills Minsk obligations.

Any deal that Trump might make over the heads of democratizing countries, such as denying eventual NATO membership for Ukraine or Georgia, could be seen as another Yalta and draw sharp rebuke. And yet these two countries have economies far weaker than the average of NATO and European Union members, and will not be ready anytime soon to join them.

In Syria, Trump can reduce flash points with Russia by focusing on core interests.

In Syria, Trump can reduce flash points with Russia by focusing on core interests: defeating the Islamic State group and averting further humanitarian catastrophe, much of it abetted by Russian forces. Trump should offer Putin cooperation on locating returning Islamic State group fighters and sleeper cells, and possible de-radicalization techniques. If Putin contributes to an international negotiation on bringing peace to Syria, Trump might drop President Barack Obama's insistence that “Assad must go.” Russia fears Libya-like chaos if he leaves.

Trump ought to engage Putin on the August 24 NATO call for new arrangements with Russia on handling unexpected or provocative military encounters, and transparency to reduce uncertainty from no-warning military exercises. Last April in the Baltic Sea, Russian combat aircraft performed barrel rolls over U.S. reconnaissance aircraft and a close approach to a U.S. warship. With U.S.-Russian relations so tense, an accident could have escalated risks.

Arms control holds modest potential to warm relations. Russia has halted participation in the Treaty on Conventional Armed Forces in Europe, and appears to be violating a treaty that bans intermediate-range nuclear forces. The New Strategic Arms Reduction Treaty, reducing threats from long-range nuclear forces, remains vital and both sides should reaffirm it. Opportunities may exist for cooperation on missile defense but thus far Russia has objected.

At the same time, Trump should pursue dialogue on cybersecurity even as he counters Russian cyber-aggression.

If Russia is ready for progress, Trump might begin to shape a new normalcy by offering a cabinet-level Pence-Medvedev Commission akin to the high-profile Gore-Chernomyrdin Commission of the 1990s. A new commission, this time including Europe because of its importance to Russia, could spur economic, energy, scientific and other cooperation along a broad front. Private sector cooperation in technology and innovation offers great potential because of Russia's talented workforce, more of which may emigrate if conditions do not improve.

Little progress will be possible, however, unless Moscow ends its simmering war in the Donbas and dials back its shrill anti-Western posture and political influence operations, such as fake news and social media trolls. If the Kremlin does this, Trump and Europe's leaders should advance a robust agenda with Russia that could help it reverse economic stagnation and international isolation.

This commentary originally appeared on U.S. News & World Report on December 1, 2016. Commentary gives RAND researchers a platform to convey insights based on their professional expertise and often on their peer-reviewed research and analysis.