Al Qaeda in Syria Can Change Its Name, but Not Its Stripes 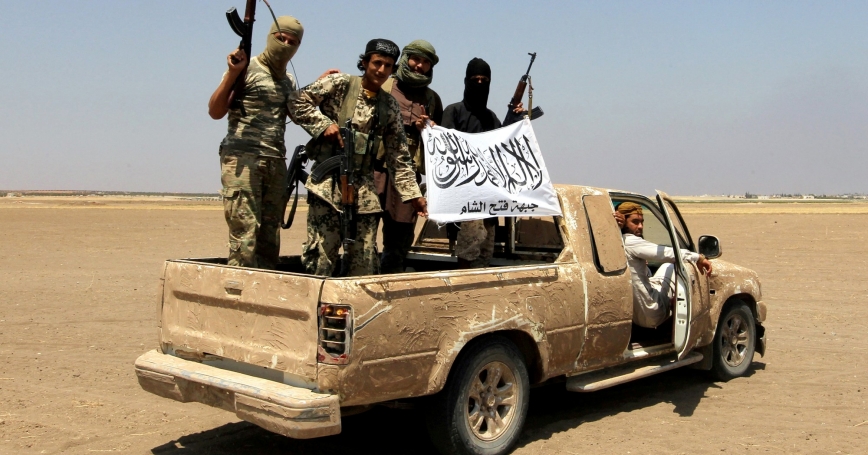 Fighters of the rebel group Jabhat Fateh al-Sham cheer after a Russian helicopter was shot down in Syria's rebel-held Idlib province, August 1, 2016

Following recent infighting with other Syrian rebel groups in the northwestern part of the country, al Qaeda in Syria appears to have recognized the need to secure legitimacy and present itself to the civilian population it seeks to influence as an authentically Syrian entity.

To that end, in late January, al Qaeda's affiliate in Syria joined with four other jihadist groups to form a new organization — Hayat Tahrir al Sham (HTS), or the “Assembly for Liberation of the Levant,” led by Abu Jaber (also known as Hashem al-Sheikh), former commander of the Syrian rebel group Ahrar al-Sham.

The Syrian branch of al Qaeda has undergone substantial changes over the past year. In mid-2016, the group announced it would no longer be known as Jabhat al-Nusra (Nusra Front) and would instead adopt the moniker Jabhat Fateh al-Sham (JFS) as part of the effort to distance itself from the al Qaeda network. But several prominent terrorism experts were skeptical that the rebranding signaled that the Syrian group was truly independent of the international al Qaeda leadership.

The initial rebranding from Jabhat al-Nusra to JFS accomplished several different, but interrelated objectives. JFS leaders likely hoped the rebranding would make it more feasible for the Sunni states in the Gulf to provide the militants with desperately needed resources to continue the fight against Syrian President Bashar al-Assad and his allies.

A likely objective of the rebranding was to portray JFS as an inclusive organization capable of working with other Syrian rebel groups.

Another likely objective of the rebranding was to portray JFS as an inclusive organization capable of working with other Syrian rebel groups fighting the Syrian regime. By aligning with local elements of the opposition, JFS could claim to be among the most representative and legitimate of literally hundreds of rebel groups on the ground in Syria.

Finally, by its exceedingly public disassociation from al Qaeda, JFS might have hoped to adopt a lower profile and elude the intense scrutiny the Islamic State (ISIS) receives from the Syrian regime, Russia and the United States. And while the United States places top priority on defeating ISIS, the al Qaeda-affiliated extremist groups that are consolidating territory around Idlib province in northwestern Syria have become targets of American airstrikes as well.

A targeted strike in late February killed veteran al Qaeda commander Abu al-Khayr al-Masri. Shortly thereafter, the U.S. Treasury Department imposed sanctions on two senior al Qaeda operatives in Syria. These aggressive U.S. moves against al Qaeda in Syria are designed to cripple the organization while signaling to other jihadist groups that joining the coalition would lead them to be targeted as well.

The recent move by JFS to create Hayat Tahrir al Sham (HTS) is less a rebranding than an opportunistic attempt at expansion. This has occurred while Ahrar al-Sham — HTS' rival and a group the West views as more moderate — is divided and weakened and as other moderate Syrian rebels are no longer receiving aid from the United States, Turkey and Saudi Arabia, on grounds that that supplies could be co-opted by groups linked to al Qaeda.

The introduction of a new and “separate” entity may be an effort to begin developing a legitimate political wing.

To be sure, HTS is not the first terrorist or insurgent group to attempt to refurbish its image through a name change. In many cases though, the introduction of a new and “separate” entity is an effort to begin developing a legitimate political wing, as the Provisional Irish Republican Army did with Sinn Fein. As was the case in Northern Ireland, the establishment of Sinn Fein as a legitimate political entity was a major factor in helping bring the conflict to an end after 30 years of fighting, culminating with the Good Friday Agreement of 1998.

One possible motivation for the name change is that al Qaeda in Syria believes its rival, ISIS, is headed toward defeat and that without ISIS to worry about, the U.S. would elevate HTS to its number-one target. Al Qaeda had eschewed active intervention in many countries during the Arab Spring, and its leadership saw Syria as a chance to reestablish its relevance.

The most likely scenario is that the change in nomenclature is merely an attempt to buy time and live to fight another day. Indeed, the rebranding has done nothing to slow down the group's operations tempo of conducting attacks.

In late February, HTS launched a campaign targeting other rebel groups it accused of acting in support of external powers. It also assassinated one of Assad's top commanders, Major General Hassan Daabul, the regime's military intelligence chief in the Syrian city of Homs.

In mid-March, HTS claimed responsibility for a double suicide bombing in Damascus, which killed at least 40 people and was apparently aimed at Shiite pilgrims visiting shrines. A follow-on suicide attack launched less than a week later killed at least 30 inside a historic judicial building close to the shrines.

Despite several attempts at rebranding over the course of the past year, al Qaeda in Syria, by any name, remains a dangerous and capable terrorist organization with the ability to conduct attacks in the West. Those seeking to grapple with the threat posed by the group should focus less on the game of “what's in a name” and more on its actions.

Six years into the conflict in Syria, al Qaeda's presence in the country has never been stronger. And while most dismiss the notion of al Qaeda as a political entity in Syria, the same was said 30 years ago about Hezbollah — the Shia group that now holds seats in Lebanon's parliament and maintains a vast military wing. If jihadist groups linked to al Qaeda in Syria can succeed in rebranding themselves, they can take steps toward positioning themselves as political players if or when negotiations to end the civil war in Syria gain traction.

Colin P. Clarke is a political scientist at the RAND Corporation and an associate fellow at the International Center for Counter Terrorism. He is the author of "Terrorism, Inc.: The Financing of Terrorism, Insurgency, and Irregular Warfare."

This commentary originally appeared on The Cipher Brief on March 23, 2017. Commentary gives RAND researchers a platform to convey insights based on their professional expertise and often on their peer-reviewed research and analysis.