Brexit and the Politics of Raising Barriers 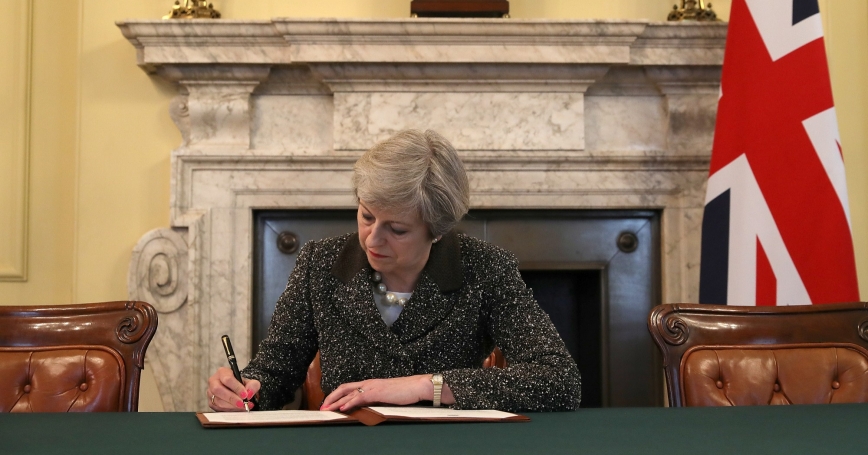 Today, Britain made it official. It is withdrawing from the European Union.

Never before has a major developed country decided on its own to withdraw from a political and economic association with significant geostrategic implications, and without a military defeat or political revolution.

A lot is known about bringing new members into alliances and trade relationships, but not so much about dismantling them peaceably. Since Britain leaving the EU will be more about adding barriers than taking them down, it will be a leap into the dark.

Britain leaving the EU will be a leap into the dark.

The future shape of Europe, and the U.S. relationship with it, will be affected by the post-Brexit relationship between the UK and the rest of the EU, and by the cohesiveness and policies of the 27 countries that remain.

Will nationalism prevail as the leitmotif for Europe for the rest of the decade? Will the United States lose Europe as an effective partner in fighting extremism and terrorism in the Middle East, or in leading the G-20 in underpinning the global economic system? What will be the effects on NATO, or U.S. commitments to defend NATO members from aggression?

British voters supported Brexit by referendum last June, but the negotiations about “how” it will happen and “what” will follow are only beginning.

There is a partial framework: Britain started today by filing a notice under Article 50 of the Treaty of European Union. That starts negotiations over the terms—mainly financial—of the breakup. These are to be concluded in two years, unless extended by the EU27 unanimously.

Whether or not agreement is reached, unless the process is extended by EU members acting unanimously, Britain is out of the EU. The treaty is silent on how any agreements for a follow-on relationship will be fashioned.

The EU27 and Britain have conflicting objectives. The EU27's overriding interest is to ensure that Britain's future relationship with the EU is so decidedly worse than membership that no other member will want to withdraw. Britain's overriding interests are to regain full control over migration (it must now allow EU27 citizens to freely enter and work in the UK), and to be free of European Court of Justice jurisdiction and European Commission rulemaking.

The EU, worried about the possible “contagion effect” of Brexit, is taking a hard line on the UK.

Political calendars also do not align. EU member states, worried about the possible unraveling “contagion effect” of Brexit, are taking a hard line on the UK so as not to energize euroskeptic voters in elections in 2017 in the Netherlands (this month), France (May-June) and Germany (September).

So the EU side likely won't get serious about the future relationship negotiations until the end of 2017 at the earliest. The UK is anxious to wrap up matters before its next general election in 2020, which is why the government has decided to file the Article 50 notice now. In between, there is precious little time to deal.

In a major speech January 17, British Prime Minister Theresa May set out her government's objectives for Brexit beyond regaining sovereignty. She said Britain does not want to be “half-in and half-out,” but that it “does want a comprehensive, bold, and ambitious trade agreement,” providing the “freest possible trade in goods and services between Britain and the EU's member states.”

Mindful of their objective to not make it too easy or beneficial for Britain to exit, leaders of other EU states and institutions are talking tough. The EU's lead negotiator says the EU must secure a deal on an orderly breakup (an exit fee of as much as $60 billion has been mentioned) in the withdrawal talks before even beginning discussion of a new economic and political relationship. EU partners also speak of the “complexity” of a comprehensive trade deal, and envisage it might take years to complete.

Is a contentious, economically disruptive break between the UK and the EU inevitable? Are talks on a new trade and economic relationship necessarily complex and lengthy? If so, the UK's economy might fall off a “cliff-edge” the day it departs the EU, losing all economic benefits of internal market trade in goods and services, and the benefits of existing EU free trade arrangements with other countries.

What's needed is another way to cast the negotiations to deal with the timing problem, and the EU's political problem. As it happens, this negotiation is unlike any trade negotiation that has ever taken place. All trade negotiations in the post-war world thus far have all been about reciprocally lowering barriers to trade and investment, or setting rules for trade that often come with dispute settlement mechanisms to increase their credibility.

But the EU-UK negotiations will be about changing the basis of a barrier-free market that already exists, the EU's “single market” for goods and services. While the single market is imperfect (especially in the service sector), it is more comprehensive than any other comparable economic relationship and allows British and European companies to trade and invest in each other's markets without border inspections, quotas, or duties. Common regulations apply to product safety and standards.

While it's never been done before, in principle it could be easier politically and technically to devise a free trade agreement to add selected barriers to a barrier-free market than it is to take them down.

For one thing, taking down tariff and quota barriers adversely affects economic vested interests by subjecting businesses to new competition. Putting them up will certainly harm some businesses that rely on imported inputs, but it will also immediately create supporters that see their foreign competition newly disadvantaged.

The negotiation of a free trade agreement between partners that have tariff barriers and differing regulatory systems takes a long time in part because farmers and manufacturers fear the new competition that will arise. This is a major reason for difficulties encountered by negotiators on the U.S.-EU Transatlantic Trade and Investment Partnership, which included differences over food safety, automobiles, agricultural varieties (particularly genetically modified organisms), and pesticides, just to name a few of the regulatory obstacles.

In contrast, the new EU-UK agreement should be about finding a new basis for conducting today's free trade, and for maintaining existing regulatory frameworks. This should be much easier. Surely the EU will want the UK to apply EU product and environmental standards.

Vested interests by and large will oppose new barriers because they will disrupt integrated value chains that exist, or disadvantage retail networks in place on both sides of the channel. All the EU and UK need to do is confirm the essential elements of this system and business across the channel can flow as it does now.

The challenge that Brexit presents for the EU and the UK is mainly political.

So the challenge for the EU and the UK is mainly political. Both sides want the economic relationship to look—and feel—different. The UK wants to show British audiences that the country has broken free of Brussels's embrace, and the EU wants to show European audiences that Britain is worse off. But unlike U.S.-Mexico, there isn't a real constituency for raising major new barriers to trade (tariff or otherwise) between the UK and the EU. In fact, major swathes of UK and EU manufacturing such as cars, pharmaceuticals, and aircraft depend on cross-channel value chains.

The task then for sober EU and UK negotiators is to change the political basis for their economic relationship thoroughly, to show that the UK is out, and has paid a price in terms of access, but to do so as much as possible without impairing the economics of the relationship.

This will require smoke, mirrors, and negotiating drama, but is not fundamentally a difficult task and at least it does not face the protectionist opposition that liberalization stirs up elsewhere.

If the British and Europeans can succeed, it could help attenuate the nationalism that is associated with critiques of trade agreements elsewhere (including in the U.S.), and help assure Americans of a strong and capable Europe able to share the burdens of global leadership.

This commentary originally appeared on Newsweek on March 29, 2017. Commentary gives RAND researchers a platform to convey insights based on their professional expertise and often on their peer-reviewed research and analysis.