To Take Raqqa, the U.S. Must Work with Its Partner in the Fight Against the Islamic State Group 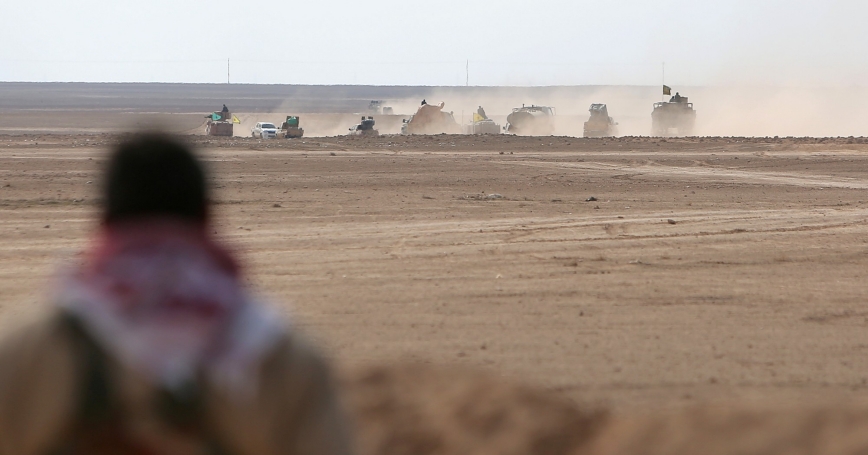 SANAA, Syria – During a trip last week to Iraq and Syria with Central Command chief Gen. Joseph Votel, he and his subordinate commanders argued that arming Syrian Kurdish forces is vital to routing the Islamic State group from its self-declared capital of Raqqa. Votel and his traveling party, including myself, flew on V-22 Ospreys to a dirt airfield in Syria that U.S. military engineers have made ready for the gathering assault on Raqqa. To take Raqqa, officials say, the Kurds need anti-tank weapons to defeat Islamic State group vehicle bombs, armored vehicles and more heavy arms such as machine guns. Additional U.S. support will be needed, including High-Mobility Artillery Rocket System artillery, logistics support, more U.S. advisory teams and other enablers.

While arming the Syrian Kurds might be the easiest way to maintain momentum in the campaign against the Islamic State group, this option courts two significant risks. Turkey may attack Syrians and the U.S. forces working with them, or stop flights and related counter-Islamic State group activity on Turkish bases, severely complicating the campaign against the group. Turkey strongly opposes the U.S. bid to arm the Syrian Kurds, which have been closely allied with the armed Kurdish movement fighting Turkey's government. The second risk is that Syrian Arabs will reject use of the Kurdish-dominated force to liberate their areas.

The U.S. has been working hard to mitigate the second risk by boosting the number of Arab fighters in the Kurdish-led coalition called the Syrian Democratic Forces, or SDF. We made a second stop here in Sanaa, a village near Manbij, where U.S. Special Forces and SDF fighters were training new Arab recruits. U.S. military officials claim that Arab Syrian fighters in the SDF coalition now number 23,000, versus 27,000 Kurds. When the fighters complete their 20-day training, the U.S. supplies them with AK-47s, a few light machine guns, ammunition, Toyota Hilux pickups and a few cargo trucks. The SDF and its U.S. Special Forces partners have also been working assiduously to create local structures that the population may embrace. The Manbij Military Council now has six Arabs and four Kurds, and the 140-member Manbij Civilian Council has a non-Kurdish majority as well.

Votel believes in the current approach of using local indigenous ground forces rather than having U.S. forces conduct combat operations to take Raqqa. “The by, with and through approach is a proven one, and I think it works well for us,” he says. “It shows the power of small teams and what they can do. It is not particularly helpful when we overwhelm our partner.“ However, the Syrian Arabs recruited for the SDF lack much if any military experience and will thus have to rely on the more experienced People's Protection Units, or YPG, the Syrian Kurdish element that forms the core of the anti-Islamic State group force the U.S. has been backing since 2014, for help in Raqqa—as they did in Manbij. The key to success in Raqqa will be whether local forces can indeed hold the area once the Kurds depart, as they have promised to do after clearing the city of the Islamic State group.

Lt. Gen. Steve Townsend, Votel's top U.S. battlefield commander for the fight against the Islamic State group in both Syria and Iraq, bluntly conveyed his views of the stakes to the traveling party. Citing intelligence reports of Islamic State group plots to attack Europe, Townsend says that the Raqqa assault needs to proceed “as quickly as possible—and with a real force. There is an imperative to take Raqqa, and it will take significantly longer if we do not arm the YPG.”

Among the options offered to allay Turkey's concerns about the YPG is to meter the supply of weaponry and ammunition to only that needed for Raqqa. Another is that the U.S. could serve as a guarantor by cementing its long-term influence over the Syrian Kurds. “We can ensure that they are not a threat to Turkey,” Townsend argues. “Who would Ankara want to have influence with the SDF: Russia, Iran or the U.S.?”

Given Turkey's deep suspicion of the YPG, these blandishments will not likely suffice. Rushing into Raqqa without reaching agreement with Turkey, however, would jeopardize larger U.S. regional and even global geopolitical objectives. Continuing to isolate Raqqa will enable the U.S. to constrain the degrading the Islamic State group threat until diplomatic efforts can resolve Turkish concerns.

Linda Robinson is a senior international and defense researcher at the nonprofit, nonpartisan RAND Corporation.

This commentary originally appeared on U.S. News & World Report on March 9, 2017. Commentary gives RAND researchers a platform to convey insights based on their professional expertise and often on their peer-reviewed research and analysis.