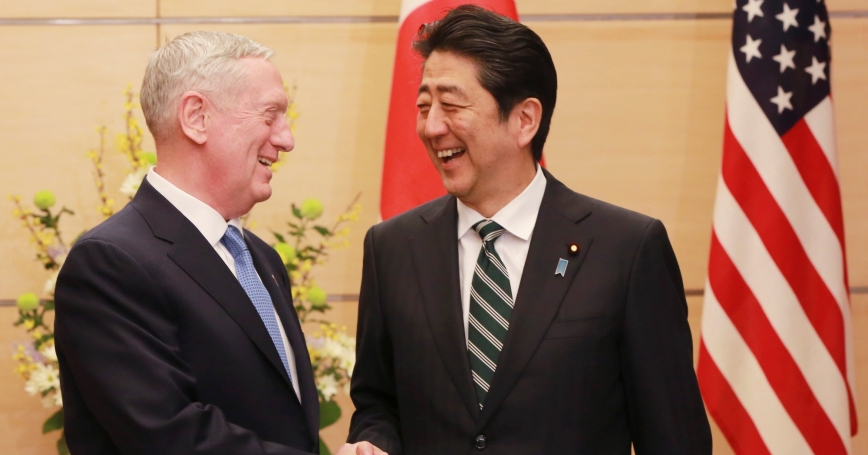 During the 2016 U.S. presidential contest, Donald Trump was highly critical of the structure and costs of the U.S.-Japan mutual defense relationship and openly raised the possibility of a Japanese nuclear deterrent. His remarks caused substantial confusion, concern, and consternation within Japan and among U.S. supporters of the U.S.–Japan alliance, which has more typically been described as anchoring stability in the Asia-Pacific and the cornerstone of the regional security architecture that the U.S. built up in Asia after World War II.

However, U.S.–Japan relations appear to be stabilizing in the wake of a highly successful visit by Defense Secretary James Mattis to Tokyo in early February that reaffirmed the alliance “for years to come,” and an equally successful visit by Prime Minister Shinzo Abe to the U.S. a week later. Secretary of State Rex Tillerson, perhaps reflecting Mr. Trump's recent promise to stand behind Japan “100 percent,” recently affirmed to his Japanese counterpart that the Trump administration will continue to apply Article 5 of the U.S.–Japan Mutual Security Treaty to the Japanese-administered Senkaku Islands. Mr. Trump appears to have concluded that the alliance with Japan is more important than his previous remarks suggested.

Japan, for its part, has taken numerous steps in recent years to strengthen its defenses in ways that make it a more valuable partner to the United States. These include setting up a National Security Council, articulating a new National Security Strategy, and reorienting its Self-Defense Forces from preparing primarily to deal with a Russian invasion from the north to an air and maritime threat posed by China in the southwest. In addition, Japan has reinterpreted the constitutional constraints on the Self-Defense Forces, increased defense spending, established an amphibious rapid reaction force, and begun to treat space more explicitly as a national security domain. Leading experts have noted that such moves are more evolutionary than revolutionary and still leave Japan's security forces constrained. While progress has been slow, Japan is moving in the right direction.

Tokyo's next steps are already in the works, with studies of expanded ballistic missile defense already underway in both the ruling Liberal Democratic Party and the Japanese Ministry of Defense. Japan's focus will likely be on procurement of either a Terminal High-Altitude Area Defense battery or on buying Aegis Ashore, an exo-atmospheric missile intercept system. The country is also debating the procurement of electronic warfare aircraft and offensive strike capabilities to hit enemy missile bases. Additionally, Japan plans to buy up to 17 V-22B Block C Osprey tilt-rotor aircraft, useful for rapidly moving forces to remote islands that might be threatened by China.

For its part, the Trump administration is requesting an expansion of up to nine percent in defense spending, is considering substantial increases to the size of the U.S. Navy, and may invest in upgrading the U.S. nuclear arsenal as well as developing “state of the art” ballistic missile defenses. It appears likely that such military spending is intended partly, or perhaps even primarily, for supporting U.S. policy goals in the Asia-Pacific.

Given the criticisms that the President leveled at Japan during the campaign, observers have speculated that Tokyo might seek to address Trump's criticisms through additional purchases of American military hardware and expanded joint defense industrial development. The Abe administration has also restated its “unwavering commitment” to follow through on an agreement to construct a replacement facility for U.S. Marine Corps Air Station Futenma in Okinawa.

A final development that analysts of the alliance will be watching closely will be the Trump administration's articulation of a regional strategy that the U.S.–Japan alliance can nest within. While the Obama administration's Asia “pivot” may not have succeeded in achieving all of its goals, it is not doomed, and the legacy that it represents is one that many observers of U.S. Asia policy believe the Trump administration should build on, not abandon. The strength of the pivot was that it presented a vision of the region that the U.S. wanted to see and a strategy for achieving it. Although it may have been under-resourced and imperfectly executed, it nonetheless gained substantial buy-in from regional allies and partners who welcomed a liberal, rules-based international order focused on democracy, human rights, sustainable economic development and countering global climate change, as well as ensuring that conflicts—even those involving big powers—are resolved peacefully.

If the Trump administration were to choose not to invest in U.S. leadership on universal values, global order, and trade, the U.S.–Japan alliance could be stripped of much of its supporting architecture. Reduced to its military and economic dimensions, the alliance will persist, but it will contribute less to American and Japanese security and values, be more vulnerable to tensions over costs, and will struggle to effectively shape the choices of a rising China or a rapidly evolving Asia-Pacific. One of the most urgent challenges facing U.S. Asia policy today, then, is the articulation of U.S. goals for the region and an effective strategy for achieving these that leverages U.S. hard power and soft power alike and offers allies like Japan a clear framework they can plug into and augment with their own unique strengths.

Scott W. Harold is the Associate Director of the RAND Center for Asia Pacific Policy, a political scientist at the nonprofit, nonpartisan RAND Corporation and a member of the Pardee RAND Graduate School faculty.

This commentary originally appeared on The Cipher Brief on March 3, 2017. Commentary gives RAND researchers a platform to convey insights based on their professional expertise and often on their peer-reviewed research and analysis.