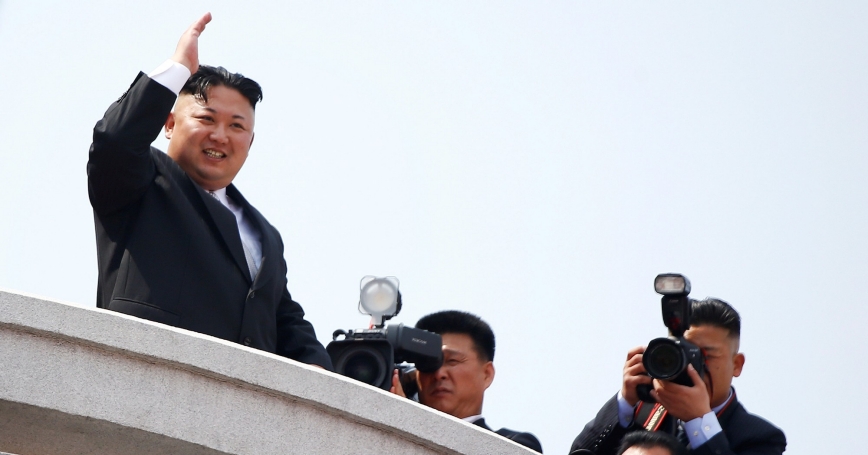 North Korea's brash pursuit of weapons of mass destruction and disregard for chemical weapons norms are enormously troubling. Yet as the current unproductive exchange between that country and the United States demonstrates, China's engagement will be essential for ensuring North Korean President Kim Jong Un does not resort to the use of chemical weapons. Such a strategic miscalculation could be the spark that could bring the region to war.

Over the weekend, North Korea followed a parade of new missiles and launchers with another show of power that failed spectacularly—a missile blew up soon after launching. But while the world is nervously trying to gauge North Korea's nuclear capabilities, chemical weapons are said to be firmly within North Korea's grasp and could be used against a neighboring country, with devastating consequences for all.

North Korea, which remains outside of the Chemical Weapons Convention, is reported to possess up to 5,000 tons of 25 chemical agents and has been implicated in the recent assassination of the North Korean president's half-brother, Kim Jong Nam, in Malaysia. The weapon of choice was reportedly the lethal nerve agent VX.

The U.S. responded to the chemical attacks earlier this month in Syria with a military strike on a Syrian airbase that U.S. officials said was home to the warplanes that had carried out the chemical weapons attack. However, the launching of 59 Tomahawk cruise missiles cannot be looked at as a model response to be repeated in North Korea. The stakes are far too high and the chances of a strategic miscalculation too great.

In Syria, the focus was internal. Syrian President Bashar Assad used chemical weapons against his own people. A horrific act, yet contained within the Syrian borders. The act was clearly a crime against humanity, and it would be appropriate for the International Criminal Court to indict Assad.

Should Kim decide to employ chemical weapons, the targets would probably be external, likely South Korea or Japan, or perhaps even U.S. forces in the region. In any case, such an attack would place the United States and its close allies in a dangerous predicament.

Nations throughout the region would certainly, and swiftly, call for military action. South Korea would likely see this as the opening salvo in a return to open hostilities. Japan remains sensitive about this issue following the deadly 1995 sarin nerve gas attacks on Tokyo by the cult Aum Shinrikyo. Japanese Prime Minister Shinzo Abe has already expressed concern about North Korea's possible use of chemical weapons, speculating in front of parliament that North Korea may already have the capability to put chemical warheads on missiles. Both governments would undoubtedly be under great pressure to respond should a chemical attack occur.

Furthermore, the U.S. has maintained a presence in the region for almost 70 years, clearly establishing Japan and South Korea as key allies with vital national interests to be defended. Pressure to defend these key allies would be considerable and immediate.

However, even a reaction that would include limited strikes, such as those against the Syrian airbase, could be taken as the leading edge of operations to bring down the North Korean regime by force. The result could be the shelling of Seoul, a city of over 10 million people, with catastrophic consequences. The counterpunch to such a North Korean action by allied forces would likely be equally swift, resulting in a return to open hostilities on the Korean Peninsula.

To prevent the unthinkable from occurring, the North Koreans must be dissuaded from using chemical weapons. They must be convinced that the use of chemical weapons is a red line that cannot be crossed. China should consider being the messenger for this message.

China also should consider taking an active, forward-looking approach to prevent the use of chemical weapons by North Korea. When Syria deployed chemical weapons, there was speculation that Russia may have been complicit or at least aware of plans to conduct the attack.

There can be no ambiguity about the consequences of the use of chemical weapons. China would need to make clear that the result would be a severing of diplomatic ties between the two nations, closing of the China-North Korea border, an embargo for all trade that is occurring to include humanitarian support, and active global condemnation led by China as a result of chemical weapons use.

Should North Korea fail to be dissuaded from launching a chemical attack, any response should be coordinated with allies in the region and not result from a unilateral decision by the United States as was done in response to Syria. Such a response would do well to include the full authority of the United Nations and be executed by an international coalition.

Finally, the norms against the use of weapons of mass destruction, which includes chemical weapons, could be strengthened. The U.S. strike against the Syrian airbase should only serve as a first response to Assad's use of chemical weapons. The international community could continue to put pressure on Assad, with regime change and transition of power as the only acceptable outcome.

A strong message needs to be sent that the use of weapons of mass destruction will not be tolerated.

This commentary originally appeared on U.S. News & World Report on April 20, 2017. Commentary gives RAND researchers a platform to convey insights based on their professional expertise and often on their peer-reviewed research and analysis.