Why Would Assad Use Chemical Weapons? 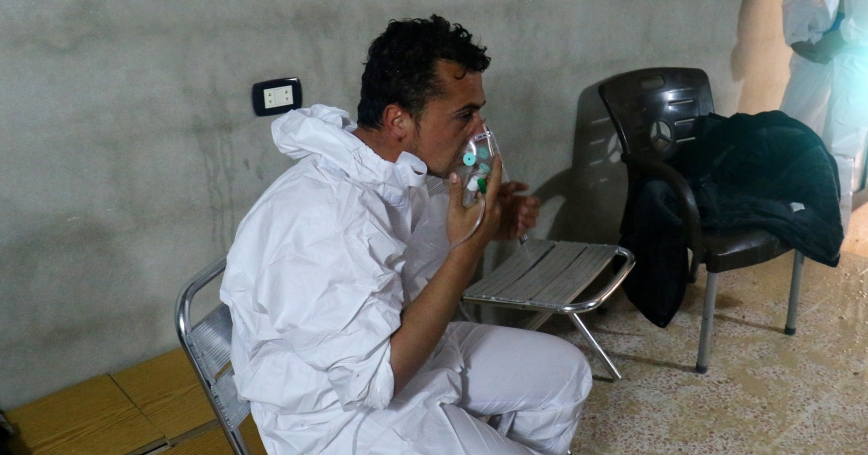 A man breathes through an oxygen mask, after a suspected gas attack in the town of Khan Sheikhoun in rebel-held Idlib, Syria April 4, 2017.

Chemical weapons have limited military utility, a fact known since the end of World War I. Explosives and machine gun bullets were shown to have killed far more people, to say nothing of disease. The use of chemical weapons today provokes international condemnation, if not always action. Those who order their deployment risk being charged with war crimes. So why would Syria's President Bashar Assad use them?

Against civilian populations, chemical weapons are instruments of terror—a demonstration that resistance will bring horrific consequences. But indiscriminate mass murder is a consequence of their use, not the objective. The broader aim is to encourage civilians in rebel-held areas to clear out.

This is consistent with the Syrian regime's general approach to counterinsurgency, which differs from Western notions of winning hearts and minds. Syria wants areas beyond government control to be depopulated. As part of a strategy to make life untenable in rebel zones, Syrian armed forces target civilians, commerce, food supplies, hospitals and health care facilities. This approach has helped turn half of Syria's population into refugees who flee to other regions within the country or abroad.

Syria's strategy is also consistent with its current effort to consolidate a bastion loyal to the regime in the western part of the country. The brutal air and artillery attacks on the rebel-held portion of Aleppo last fall were part of this strategy.

The strategy recognizes that the Syrian armed forces, even with Russian and Iranian backing, do not have the capacity to regain control of the entire country. It also recognizes the fact that the conflict has deepened Syria's sectarian and ethnic divides. It has become existential for all parties. Sunni Muslims will likely never again accept rule by the Alawite religious minority—Assad's base—that has dominated Syria's government for decades. Alawites, along with Christian and Shia Muslim populations loyal to Assad, cannot imagine surviving under Sunni rule. The Kurds have taken control of their own enclaves. The country is effectively partitioned and likely cannot be pieced together again. But sectarian cleansing can provide a measure of security for Assad's sector.

The Russians are mainly interested in keeping a regime in power that will enable them to continue using military bases on the Mediterranean, so Russia assists Assad in consolidating his control over a western enclave. Pushing rebels, including U.S.-backed secular insurgents, from this area has been Russia's priority from the beginning.

But military strategy may not account for the entire explanation. Assad is also playing to an inside audience. Syria's use of chemical weapons is not a dramatic departure from its previous approach to rebellion. In 1982, Assad's father employed artillery and air power to destroy the city of Hama, a stronghold of Islamist militants opposed to the regime. Thousands—mainly civilians—died in the barrage. The regime was demonstrating the elder Assad's unlimited power to wreak vengeance—a warning to future dissidents that disloyalty would bring terrible punishment. It is an effective way that paranoid potentates maintain control with only a tiny base of support.

Assad does not have the power his father possessed. The president's army has shrunk from desertions, casualties and overuse. His survival depends on local and foreign militias, not under his direct control, and on Russian airpower, but only so long as he serves Moscow's interests. That makes him appear weak and vulnerable within the eyes of his own constituents. Assad may no longer have a huge army, but he has chemical weapons under his control, and he can use them to demonstrate his own independence and power.

Ironically, Assad's use of chemical weapons makes him even more dependent on Russian air defenses to protect Syria against foreign attack. When the U.S. chose to strike, Russia either couldn't or chose not to utilize the advanced air defense systems it has deployed in Syria to block the American attack.

While the use of chemical weapons causes revulsion outside of Syria, those within the country may be less opposed to their use since many may be terrified of the kind of rule they see imposed by the Islamic State group. Civil wars are almost always more vicious than state to state conflicts. Syria's population has been brutalized by more than five years of war with more than 400,000 deaths. Amid indiscriminate artillery shelling, terrorist bombings, mass executions, crucifixions, people people being beheaded or burnt alive, chemical weapons may well be just another atrocity to those on the ground there.

This commentary originally appeared on U.S. News & World Report on April 10, 2017. Commentary gives RAND researchers a platform to convey insights based on their professional expertise and often on their peer-reviewed research and analysis.