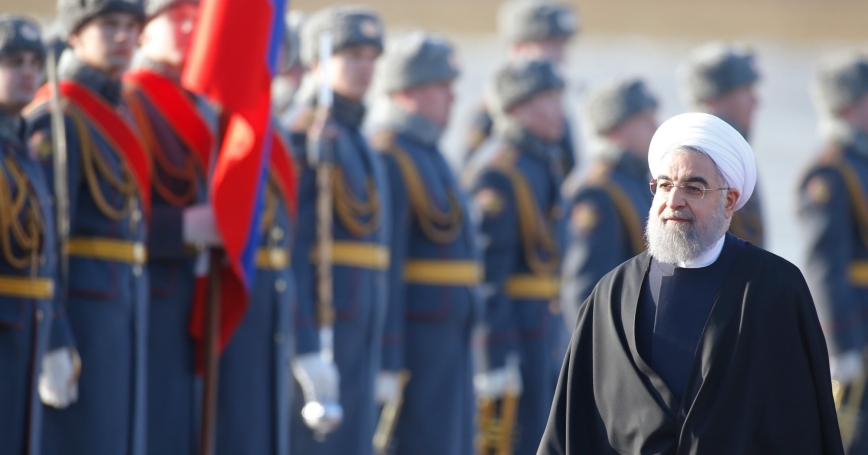 It would be easy to assume that Hassan Rouhani is destined to win re-election in this month's Iranian presidential vote. His presidency produced the Joint Comprehensive Plan of Action nuclear agreement, or JCPOA, which reduced the chances of war with the United States and removed the most onerous sanctions on the Iranian economy. Iran's oil output has increased as inflation has decreased, and the political system has achieved a degree of consensus and stability.

But the Iranian president is not guaranteed a second term.

Rouhani is poised to face off against hard-line candidate Ebrahim Raisi—a largely unknown mid-ranking cleric, but also a loyal and trusted member of the revolutionary establishment. Rouhani, although deeply committed to the regime, has never been fully trusted by the security forces, especially Iran's Islamic Revolutionary Guard Corps, and he has at times disagreed with Iran's ultimate authority, Supreme Leader Ayatollah Ali Khamenei.

A Raisi win alone would not end the JCPOA, but the vulnerable nuclear agreement could face grave jeopardy in the event of heightened U.S.-Iran tensions, continued conflict in the Middle East, and the death of Khamenei.

Raisi is not a popular figure in Iran, but that just might work to his advantage. For one, the Iranian population continues to live under duress and may be open to new candidates. The JCPOA has not resulted in the great economic windfall promised by Rouhani and hoped for by many Iranians. Higher oil output may mean more money in the government's pockets, but it doesn't translate into a better situation for the average person. Jobs are hard to come by in Iran, and many of those struggling to make ends meet face high prices and reduced government subsidies. Little foreign investment has flowed into Iran, disappointing the country's sizeable white-collar professional class. And Rouhani has completely failed to achieve his promise of a less repressive society.

Confronted with a hopeless situation, many Iranians may stay at home or vote for a new and unknown candidate.

Confronted with this hopeless situation, many Iranians may stay at home or vote for a new and unknown candidate. Raisi is hardly an agent of change; a former attorney general and the current head of Iran's largest religious foundation, the shrine of Imam Reza, he has been implicated in numerous human rights violations, including the notorious mass execution of thousands of political prisoners in 1988. Raisi is, however, favored by the Revolutionary Guards and the paramilitary Basij, both of which can effectively mobilize the country's conservative base. The regime doesn't need massive popular support for Raisi to win; nor does it need to resort to electoral manipulation or fraud, as Khamenei doesn't want a repeat of the contentious 2009 election that nearly tore his regime apart. Iranians don't have to love Raisi for him to win.

A more hard-line U.S. approach toward Iran may also boost Raisi's chances. Khamenei favors candidates who can stand up to America; his backing of former President Mahmoud Ahmadinejad in 2005 was in part a reaction to heightened tensions between Tehran and Washington. Of course, Ahmadinejad is viewed as having been a disastrous president by many Iranians, and he has been barred from running in this year's contest. Raisi, on the other hand, appears to be more level-headed and collected. He has operated quietly within the regime, rising to the top levels of the judiciary and other government bodies without much fuss or fanfare. And he will likely adhere to Khamenei's vision of the Islamic Republic as a revolutionary and anti-American power. If anything, Iran's ascendance in the Middle East and stability at home no longer require a ostensibly moderate president that can engage the West. A U.S. strategy of renewed pressure against Iran is likely to mean more pushback from Khamenei and the new president, especially in vulnerable places such as Yemen, Afghanistan, and Bahrain.

The Iranian regime is also planning for the future. The issue of succession to Khamenei, once taboo, is more openly discussed in Iran, and Raisi is rumored to be the top choice for the leadership. Winning the presidency may prove to be the ultimate boost into the most powerful position; after all, Khamenei was president before he was selected by Ayatollah Ruhollah Khomeini to be the country's next supreme leader in 1989.

Khamenei wants to prevent reform-oriented figures such as Rouhani from shaping the succession process, and Raisi may prove to be his best weapon in that effort. No incumbent president has failed to win a second term since 1981. Rouhani might not be so lucky.

This commentary originally appeared on RealClearWorld on May 3, 2017. Commentary gives RAND researchers a platform to convey insights based on their professional expertise and often on their peer-reviewed research and analysis.