Northern Ireland Is Now at the Forefront of Brexit 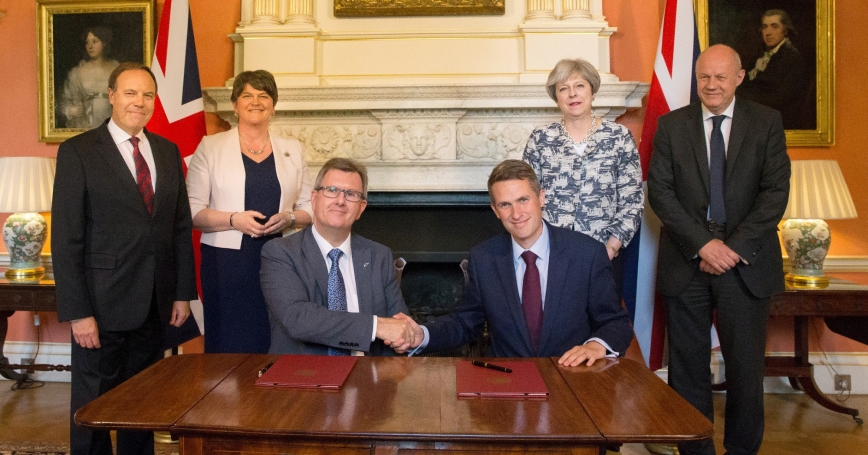 One year on from the UK's historic vote to leave the EU, and with negotiations kicking off in earnest, many now find themselves looking to Belfast — not to Westminster or Brussels — for answers as to what Europe's uncertain future might hold.

After Theresa May's unexpected failure to win a majority in June's snap election, the Prime Minister finds herself reliant on the small — and outside of Northern Ireland, little known — Democratic Unionist Party (DUP) to shore up a minority Conservative government. This is symbolic, as arguably Northern Ireland could stand to lose the most from the UK's decision to leave the EU.

Presented with a moment of unprecedented profile and leverage, the DUP have made it clear they will seek a number of assurances around the economy, border arrangements with the Republic of Ireland, and security. As Brexit negotiations begin, how might this affect the issues on the table?

On economic matters, the DUP remains wary of any “special deal” for Northern Ireland that might undermine its ties to the rest of the UK, but aware of the acute challenges facing the region. The Northern Irish economy is uniquely exposed to Brexit due to the subsidies it receives from the EU, its reliance on public sector employment, and close proximity with the Republic of Ireland. In the agricultural sector, for instance, EU subsidies account for some 82 per cent of local farm revenues. There are are stories that that the DUP will demand extra financial support for farmers to help them cope with the abolition of Common Agricultural Policy support once the UK leaves the EU.

Many fear the Irish economy could end up as collateral damage to the UK's Brexit decision.

There are similar heightened concerns in Dublin, where many fear the Irish economy could end up as collateral damage to the UK's Brexit decision. The UK is the Republic of Ireland's largest trading partner, receiving 17 per cent of exports. In return, the UK sells more to Ireland than it does to China, India and Brazil combined, with much trade and investment flowing through Northern Ireland. Irish leaders are thus concerned about the knock-on effects if the UK does not have some access to the EU Single Market, which the Republic of Ireland will remain a part of due to its EU membership.

Arrangements at the post-Brexit border are another significant concern for Northern Ireland. Any “hard Brexit” that limits freedom of movement and takes the UK outside the customs union would in theory require the re-imposition of security and custom checks on Northern Ireland's border with the Republic of Ireland. This would present practical and economic challenges with 300 formal crossing points and 30,000 people commuting to work across the border every day. There is no appetite to see a return to fences, towers and armed patrols across open fields and down country lanes.

A “softer Brexit,” reportedly preferred by the DUP, could mean that the border remains open, for instance if the UK stayed a part of the European Economic Area. Others have urged those around the negotiating table to consider far more imaginative options: maintaining an open land border in Ireland, for instance, and shifting security and customs checks to those travelling by air or sea to the rest of the UK. Patience and creative thinking will be crucial to agreeing any such bespoke solution.

Security is also a priority issue for the DUP, both in terms of addressing the ongoing Islamist threat and preventing any further breakdown of the peace process — already under stress after the Brexit vote and the collapse of more than a decade of joint rule by unionists and republicans in Stormont. How real are concerns about the security dimension, however? Does the Conservative-DUP deal, as former Prime Minister John Major has suggested, present a threat to hard-won peace in the region?

A “hard Brexit” could certainly heighten political and security tensions in Northern Ireland, which are currently strained due to the collapse of the power sharing agreement between the DUP and Sinn Fein in the Northern Ireland assembly. Sinn Fein leaders have already called for a “border poll” on Irish reunification after the Brexit vote, while peace groups have cautioned that any wider attempt by the UK to also leave the European Court of Human Rights could “tear up” the Good Friday Agreement.

A “hard Brexit” could certainly heighten political and security tensions in Northern Ireland.

Exiting the EU also poses more immediate practical and financial challenges for security. Northern Ireland has for instance received €1.3 billion of EU funds for mitigating violence and dealing with the legacy of conflict in 1995–2014. An additional €229 million has been allocated for the PEACE IV programme. In the event of Brexit, the long-term future of both forms of funding remains uncertain.

Setting Brexit aside, it may be the politics of a Conservative-DUP deal that pose some of the trickiest challenges for the peace process, as the Irish government has warned. A central part of the peace agreement is the idea that the UK government must act as an “honest broker” in talks between the DUP, Sinn Fein and other local parties. Striking a deal with the DUP could place this objectivity under threat (though the fact Theresa May heads the “Conservative and Unionist Party,” to use its full name, means the government's natural sympathies were hardly a secret in the first place).

The outgoing Irish Prime Minister Enda Kerry expresses concern that the DUP-Conservative deal could thus undermine the talks aimed at restoring the devolved power-sharing arrangement in the Northern Irish Assembly. Sinn Fein and others have been quick to cry foul.

As Brexit negotiations begin, then, many in Westminster and Brussels face an unexpected crash course in the unique concerns, tensions and peculiarities of Belfast politics. The new Northern Irish centre of gravity in British politics is yet another dimension that must be considered if these intricate, challenging talks are to be made a success.

Frantic attempts by European politicians to refresh their knowledge of Northern Irish politics may do no harm to negotiating teams meeting in Westminster and Brussels. Northern Ireland's leaders can share valuable, hard-fought lessons: the importance and difficulty of building consensus between hostile factions; the need for patience, compromise and creative solutions; and the fact that developing a new political and economic settlement will be a “process,” not an end-state. A little more consideration of Northern Ireland's past may be no bad thing for the UK and Europe's future.

James Black is a senior analyst at RAND Europe. He was one of the authors of Defence and Security after Brexit, which included a chapter on Northern Ireland.

This commentary originally appeared on HuffPost UK on June 28, 2017. Commentary gives RAND researchers a platform to convey insights based on their professional expertise and often on their peer-reviewed research and analysis.