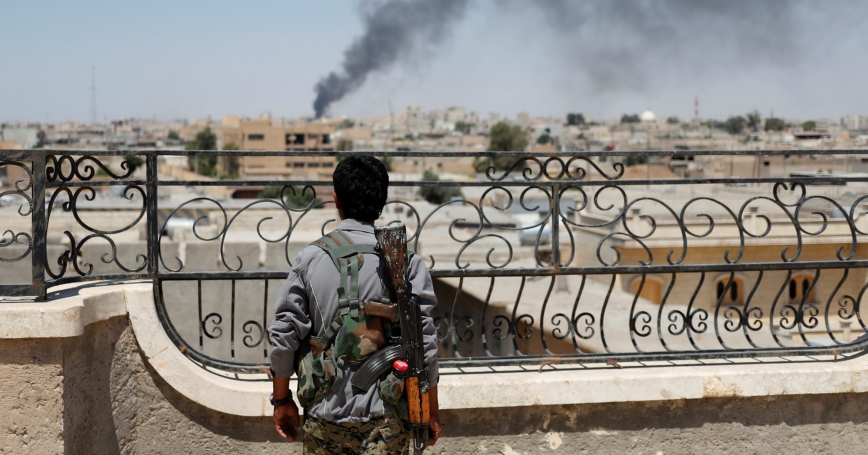 A Kurdish fighter from the People's Protection Units watches smoke rise after a coalition airstrike in Raqqa, Syria, June 16, 2017

Armies of fanatics are easily sacrificed. The presumed fervency of their foot soldiers relieves commanders of concerns about their well-being. Seeking deliverance from their previous lives, salvation in the next, all fighters are presumed martyrs.

But the Islamic State group goes beyond this bloody tradition. Its leaders have elevated the slaughter of others to a strategic principle, while murder of its own and collective suicide are keys to its defense strategy. One cannot expect an organization that celebrates mass executions, kills in horrific ways and casually murders women and children to behave differently toward its own ranks. Those defending the shrinking frontiers of the Islamic State's territory as well as those abroad who carry out terrorist attacks on its behalf are a disposable commodity.

People in Europe and the United States who feel as if they are under siege from terrorists may find some comfort in the fact that the Islamic State group itself is being devastated. Tens of thousands of its fighters in Syria and Iraq have been killed in the past 30 months. Few of the rest are likely to survive the final battles. Their behavior as conquerors makes it difficult to muster sympathy for them.

Estimates of the group's peak strength as of the beginning of 2015 vary wildly, with between 80,000 and 100,000 fighters regarded as a fair guess. By the end of 2016, American officials were claiming 50,000 fighters had been killed, although British estimates were half that. In February, the head of U.S. Special Operations Command claimed that the United States and its allies had killed 60,000 fighters. By late May, the Islamic State group was down to fewer than a thousand fighters holed up in Mosul, Iraq, while between 4,000 and 5,000 were defending Raqqa, Syria. Whatever the precise numbers, this is a spectacular decline.

Although estimates of foreign fighters who joined vary as well, there are as many as 30,000, with around 4,000 to 5,000 coming from Western Europe, and perhaps a hundred or two from North America. Most of them are doomed.

The Islamic State group further increased its ranks by enlisting impoverished and desperate locals or by simply pressing them into its service under threat. Although many of its fighters were jihadist fanatics who may have welcomed death, not all are zealots.

U.S.-supported ground forces in Iraq and Syria have steadily pushed the Islamic State group back into its two remaining strongholds in Mosul and Raqqa. Much of Mosul, where it declared its caliphate three years ago, has been recaptured, although clearing out the last neighborhoods could still take months. And the battle for Raqqa, the capital of the group's territory in Syria, has just begun. But these are the end times for the Islamic State.

No white flags of surrender will replace the Islamic State group's black flags. There will be no retreat. There will be no evacuation of civilians. Young boys and old men are being fitted with suicide vests. It is a fight to the finish.

The fall of Mosul and Raqqa will not end the armed struggle. The Islamic State's leaders operated underground in Iraq for years and can revert to a clandestine terrorist campaign. Reports indicate that many of them have already taken off to other fronts, leaving lieutenants to oversee the last stand. Surviving an underground contest will be more difficult for the foreign fighters who cannot easily blend into the local population. After the fall of Raqqa, they will be useless.

Some foreign fighters have figured this out and already left. European authorities report that about 30 percent of those who went to Syria already have returned. Others may have gone to jihadist fronts elsewhere. Still others may want to get out, but will be killed if they try — there have been numerous reports of mass executions of both fighters and civilians for attempting to leave. The fighters may serve as human bombs, the civilians as human shields.

Most of the fighters, local and foreign, will die in the rubble where they are.

If they manage to successfully escape their minders, fleeing jihadists must then get through the forces encircling Mosul and Raqqa. Secretary of Defense James Mattis recently announced an “annihilation campaign” to eliminate the foreign fighters. At large, they pose a threat to the rest of the world. It is better to eliminate them where they are. Whether they believe in Islamic State group notions that this is the Muslim Armageddon that heralds the return of the spiritual leader Mahdi or that paradise awaits them in the afterlife, most of the fighters, local and foreign, will die in the rubble where they are.

Being outside the Islamic State's territory does not prevent participation in the final battle. Others can take part remotely. Unlike al-Qaida, the Islamic State group has not focused its campaign on the “far enemy,” which means the United States and other Western nations, but like al-Qaida, it inspires followers abroad to carry out attacks where they are.

This does not mean that it recruits in any traditional sense. There is no vetting, no investment, no risks — volunteers cost nothing. Individuals are not persuaded to join, they are exhorted to kill. The Islamic State group targets malcontents, misfits, those with mental disorders, the most suggestible, those desperate to belong to something. Those who carry out an attack are rewarded with membership, recognition, and applause — a prestige suicide. Most Islamic State group terrorists abroad don't join it and kill. Instead, they kill and join, in most cases posthumously. They too are one-time use products.

Closing the ring on the Islamic State will likely prompt a barrage of homegrown terrorist attacks. Unable to make it to Syria, those left behind may believe that this is the final battle prophesied in Muslim tradition and seek participation to save their souls. Or they may be moved to avenge the deaths of their adopted brothers. The last days of the Islamic State group, like the demise of other fanatical enterprises in history, promises to be a cruel spectacle.

This commentary originally appeared on U.S. News & World Report on June 16, 2017. Commentary gives RAND researchers a platform to convey insights based on their professional expertise and often on their peer-reviewed research and analysis.