China Will Regret India's Entry Into the Shanghai Cooperation Organization 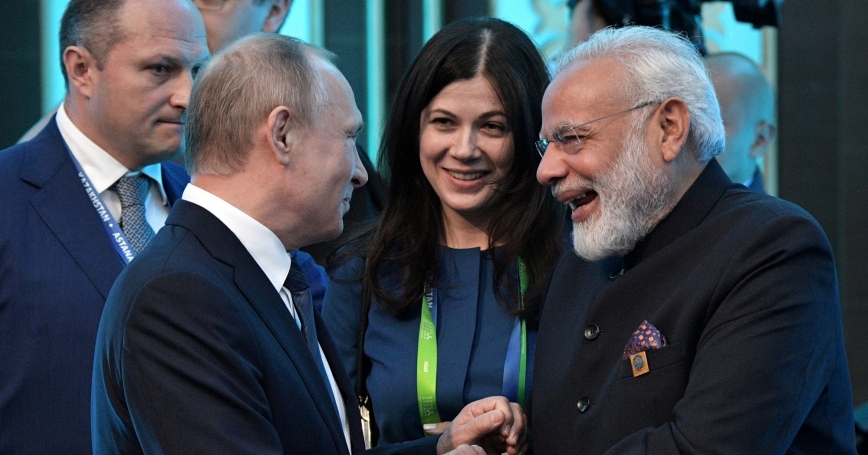 Photo by Alexei Nikolsky/Sputnik/Kremlin via Reuters

With India and Pakistan as newly installed members of the Shanghai Cooperation Organization, or SCO, China is likely to face an increasing amount of divisiveness within a regional economic and security organization accustomed to extreme comity and cooperative discussions. India's entry could especially frustrate Beijing because of rising geopolitical competition between the Asian giants and different approaches to counterterrorism.

Beijing may not have even wanted India to join the SCO. Russia first proposed India as a member, likely in part to complement bilateral economic and security engagement, but mainly to constrain China's growing influence in the organization. Russia is increasingly concerned that post-Soviet SCO members — Kazakhstan, Kyrgyzstan, Tajikistan, and Uzbekistan — are drifting too far into China's geostrategic orbit. For example, it is well known that Moscow has long delayed implementing Chinese initiatives that would enable Beijing to reap greater benefits from regional trade, including establishing an SCO regional trade agreement and bank. As China gains more clout in Central Asia, Moscow may welcome New Delhi by its side to occasionally strengthen Russia's hand at slowing or opposing Chinese initiatives. Indeed, during a recent visit to Moscow, Modi said, “India and Russia have always been together on international issues.”

Going forward, this strategy is likely to pay big dividends. New Delhi has a major hang-up related to the activities of its archrival Pakistan — sponsored by Beijing at the 2015 SCO summit to balance Moscow's support of India — and continues to be highly critical of China's so-called “all-weather friendship” with Islamabad. In May, New Delhi refused to send a delegation to Beijing's widely publicized Belt and Road Initiative summit, which was aimed at increasing trade and infrastructure connectivity between China and Eurasian countries. According to an official Indian statement, the flagship project of the Belt and Road Initiative — the China-Pakistan Economic Corridor — was not being “pursued in a manner that respects sovereignty and territorial integrity.” Indian opposition stems from the plan to build the corridor through the disputed Kashmir region and to link it to the strategically positioned Pakistani port of Gwadar, prompting Prime Minister Narendra Modi to raise the issue again during his acceptance speech at the SCO summit last month. New Delhi likely will continue to criticize the corridor in the context of the SCO because, as a full member, India has the right to protest developments that do not serve the interests of all SCO members. The SCO also offers another public stage for India to constantly question the intent behind China's exceptionally close ties to Pakistan.

India-Pakistan tensions also occasionally flare up, and Beijing may have to brace for either side to use the SCO as a platform to criticize the other. In the absence of a major incident, Beijing has admirably handled the delicacy of this situation. When asked in early June whether SCO membership would positively impact India-Pakistan relations, China spokesperson Hua Chunying said: “I see the journalist from Pakistan sit[s] right here, while journalists from India sit over there. Maybe someday you can sit closer to each other.” Additionally, the Chinese military's unofficial mouthpiece, Global Times, published an op-ed suggesting that SCO membership for India and Pakistan would lead to positive bilateral developments. Even if that is overly optimistic, it would set the right tone as the organization forges ahead.

But the odds are against China's desired outcome. Beijing needs to look no farther than South Asia for a cautionary tale. In this region, both India and Pakistan are members of the multilateral grouping known as the South Asian Association for Regional Cooperation. New Delhi, along with Afghanistan, Bangladesh and Bhutan, boycotted last year's summit in Islamabad because it believed Pakistan was behind a terrorist attack on an Indian army base. Even with an official ban on discussing bilateral issues in its proceedings, SAARC has been perennially hobbled by the intrusion of India-Pakistan grievances. Beijing can probably keep its close friend Islamabad in line at the SCO, but this likely won't be the case with New Delhi.

Another major issue for the SCO to contend with is the security of Afghanistan. An integral component of the organization is the Regional Anti-Terrorist Structure, aimed at combating China's “three evils” — terrorism, extremism, and separatism. India, however, is likely to reliably and reasonably highlight the contradiction between China's stated anti-terrorism goals and the reality of its policy. Most notably, Beijing has consistently looked the other way as Pakistani intelligence services continue to support terrorist groups in Afghanistan, including the Afghan Taliban and Haqqani Network. Moreover, because India is particularly close to the Afghan government, it could seek to sponsor Afghanistan to move from observer status toward full SCO membership. This would give India even greater strength in the group and could bolster Russia's position as well.

Lingering border disputes and fierce geostrategic competition in South Asia between China and India is likely to temper any cooperation Beijing might hope to achieve with New Delhi in the SCO. The unfolding Doklam dispute — where Chinese and Indian troops are in a standoff — is just the latest example of tense relations at multiple points along their land border. Mutual suspicions in the maritime domain persist as well, with the Indian government recently shoring up its position in the strategically important Andaman and Nicobar island chain to counter the perceived Chinese “string of pearls” strategy — aimed at establishing access to naval ports throughout the Indian Ocean that could be militarily advantageous in a conflict. Such mutual suspicions will likely impact SCO discussions, perhaps in unpredictable ways.

Although India may be an unwelcome addition and irritant to Beijing at the SCO, China does not necessarily need the SCO to achieve its regional objectives. From its announcement in 2001, the SCO gave Beijing a productive way to engage neighbors still dominated by Moscow. But today, China's economic and military strength makes it far more formidable on its own — a point that is only magnified as Russian influence simultaneously recedes. For instance, even though India rejected Beijing's Belt and Road Initiative overture, China remains India's top trading partner and a critical market for all Central and South Asian states, leaving them with few other appealing options.

India's entry into the SCO, however, could put Beijing in the awkward position of highlighting the organization's value, while increasingly working around or outside of it. Outright failure of the SCO would be unacceptable for China because of its central role in establishing the forum. Regardless of the bickering between countries that may break out, Beijing can be expected to make yet another show of the importance of the SCO, with all of the usual pomp and circumstance, at the next summit in June 2018. China as host makes this outcome even more likely.

Derek Grossman is a senior defense analyst at the nonprofit, nonpartisan RAND Corporation. He formerly served at the Defense Intelligence Agency as the daily intelligence briefer to the Assistant Secretary of Defense for Asian and Pacific Security Affairs at the Pentagon.

This commentary originally appeared on The Diplomat on July 24, 2017. Commentary gives RAND researchers a platform to convey insights based on their professional expertise and often on their peer-reviewed research and analysis.