ISIS Is So Desperate It's Turning to the Drug Trade 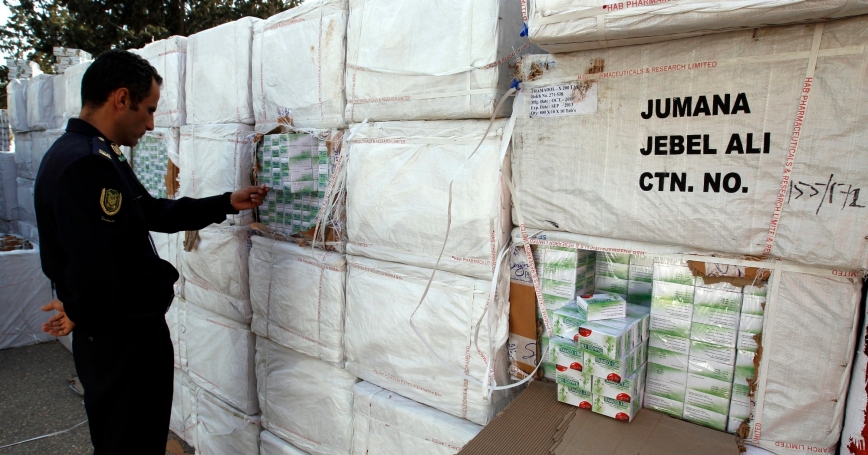 Libyan authorities accused al Qaeda of trying to smuggle 37 million tablets of the synthetic opiate Tramadol which were seized in Tripoli, March 3, 2011

As the Islamic State's territory continues to be squeezed, most notably in the Iraqi city of Mosul, primary revenue-generating streams are drying up—including oil and gas extortion, taxation of the local populations it once controlled, and money earned from phosphate and cement plants. This will likely force the group to seek new, opportunistic revenue streams to exploit, including drug trafficking, to raise money.

One major consequence of the Arab Spring, the anti-government uprising that spread across the Middle East more than six years ago, and the geopolitical tumult that followed has been that new smuggling and trafficking routes and networks throughout the Middle East and North Africa have emerged, with criminal groups and terrorist organizations taking advantage of continued instability in key geographic hubs throughout the Mediterranean region.

Islamic State, or ISIS, fighters are cognizant of the benefits this instability affords. In Rumiyah, an online magazine the organization uses for propaganda and recruitment, ISIS stressed in May that conflict zones such as Ukraine and Syria provide ample opportunities for connections to underground criminal networks.

In September, the New York Times reported on a new drug trafficking route the Italian navy discovered that stretched from Sicily to Libya. The new route is thought to be a response to increased surveillance along the Spanish coastline and an opportunity provided by the implosion of Libya, where drugs can now be moved to Egypt and the Middle East before entering Europe through the Balkans.

An investigation conducted by Italy, other European countries and the U.S. Drug Enforcement Administration revealed that, at least for a time, drugs were being taken through Islamic State-controlled territory in Libya and were likely being taxed by the group, which carried out similar procedures in Iraq and Syria. Other reports have detailed a transactional relationship between ISIS militants in Libya and long-standing Italian criminal organizations, including the Calabrian ‘Ndrangheta, which is working with the Neapolitan Camorra. There was also a report that a shipment containing 26 million tablets of the synthetic opiate Tramadol was intercepted last summer by Greek authorities. Originating in India and destined for Libya, it was bound for entities associated with the Islamic State.

An ISIS-linked group operating in North Africa, Jund al-Khilafa, has allegedly profited from providing armed protection to cocaine traffickers in North Africa, while the London-based Arabic newspaper Asharq Al-Awsat reported that ISIS has been profiting from the trafficking of cannabis, moving it from Iraq through Syria and Turkey into Europe.

ISIS militants are not just in the business of profiting from drugs, but appear to be taking them, too.

And ISIS militants are not just in the business of profiting from drugs, but appear to be taking them, too. Many reports have suggested that terrorists are widely using captagon, nicknamed “jihad pills,” an amphetamine that suppresses feelings of pain, induces euphoria and allows fighters to remain awake for lengthy battles.

The Global Initiative Against Transnational Organized Crime, a non-governmental organization dedicated to studying organized crime, estimates that the captagon market could be worth approximately $1.39 billion. Criminal gangs from Syria and Bulgaria and other terrorist groups, including Hezbollah, are thought to be involved with the production and sale of captagon throughout the Middle East, which could potentially bring them into contact with ISIS militants as fighters flee the collapsing caliphate.

The predecessor of ISIS, al-Qaeda in Iraq, was led by criminal-turned-jihadi Abu Musab al-Zarqawi, whose background included street gangs and prison time for sexual assault. Indeed, ISIS seems to attract many jihadists with a similar profile. Salah Abdesalam, the terrorist who was the main link between the Paris November 2015 attacks and the Brussels March 2016 bombings, was known for his penchant for drinking, smoking, and gambling, rather than his piety. Abdesalam frequented a bar in the gritty Molenbeek neighborhood of Brussels for drug dealing and other illicit activity.

Involvement in crime, especially drug trafficking, can lead to prison, which, in some cases, serves as an incubator for religious radicalization and violent extremism. As criminals become radicalized, this potentially increases involvement in the plotting and execution of terrorist attacks.

A 2012 European Parliament report, “Europe's Crime-Terror Nexus: Links Between Terrorist and Organised Crime Groups in the European Union,” pointed out (PDF) the pervasiveness of jihadi attacks linked to criminality, including drug trafficking. A background in the criminal underworld left behind for militant Islam can play into the appeal of what has been called “jihadi cool,” which blends “traditional notions of honor and virility, but also a strong undercurrent of oppositional, postmodern cool,” journalist Simon Cottee wrote in The Atlantic.

The modus operandi ISIS has developed for funding foreign fighter travel and for financing external operations to conduct attacks in the West works particularly well with a local criminal funding model. This model fits into how ISIS conceives of extra-territorial contributions on a tactical level.

The religious stance of ISIS offers a redemptive narrative for petty criminals to carry out terrorist attacks.

Terrorist organizations other than ISIS may have less of an affinity for this model, especially those that place a high value on political coherence and central control, with funds being central to the management of more disparate elements. But for ISIS, this model works extremely well. First, ISIS has less concern than other groups about what happens outside of the caliphate. Second, the religious stance of ISIS offers a redemptive narrative for petty criminals to carry out terrorist attacks.

Many ISIS recruits, particularly those from Europe, have relied on drug trafficking as a means of generating revenue at a low level in what Swedish terrorism expert Magnus Ranstorp has called “micro-financing the Caliphate.” Proceeds garnered from peddling narcotics affords jihadis in Europe the financial flexibility to travel back and forth to Syria as well as to save the money to help procure the resources necessary for planning a terrorist attack (such as weapons, vehicles, and cell phones).

Deepening involvement in the drug trade could also provide ISIS militants with much-needed financing to flee Iraq and Syria and pay for their return trips home. And as the caliphate collapses, captagon-fueled fighters could reinforce new fronts in the global jihad, from Western Europe to Southeast Asia.

This commentary originally appeared on Fortune on July 24, 2017. Commentary gives RAND researchers a platform to convey insights based on their professional expertise and often on their peer-reviewed research and analysis.