Lessons for First Responders on the Front Lines of Terrorism 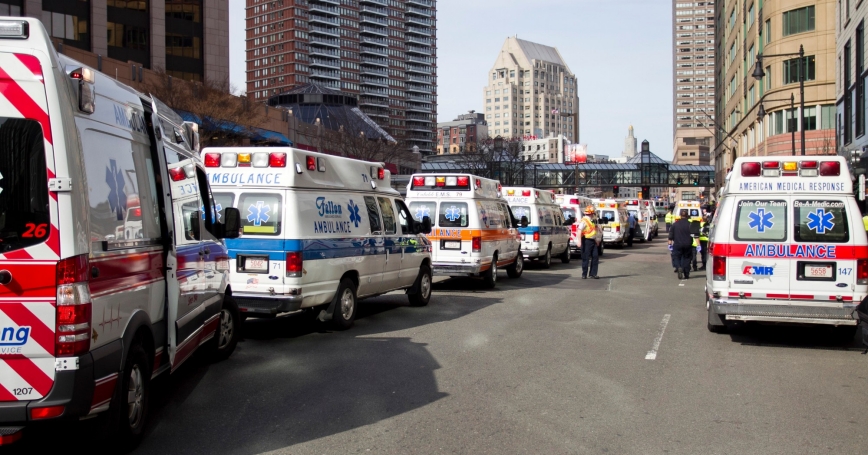 Ambulances line the street after explosions interrupted the Boston Marathon on April 15, 2013

by Mahshid Abir and Christopher Nelson

Acts of terrorism are on the rise globally. Over the past several weeks alone, the world has seen stabbings, shootings and bombings in Flint, Tehran, London, Kabul and Bogota.

We've spent the past several years researching how communities can prepare to provide urgent medical care to the large numbers of victims these events produce.

Given the persistent risk of terrorist attacks and large-scale accidents, it's more critical than ever to learn from past incidents. That will ensure that first responders can work together effectively during the chaotic but critical minutes and hours after an incident.

But equally important are the actions of nonmedical first responders. Police, firefighters and even bystanders compress wounds, apply tourniquets or drive casualties to hospitals.

In the Boston marathon bombing, for instance, 264 victims transported to local hospitals survived, despite many serious injuries. This was credited not only to excellent triage, transport and care by medically trained paramedics, EMS and hospital staff, but also to immediate lifesaving actions by police and bystanders.

However, things do not always go so well. In the often chaotic post-incident scene, it can be difficult to coordinate the efforts of multiple response agencies and bystanders. Even as EMS personnel triage and transfer victims, law enforcement needs to maintain security, preserve evidence and locate potential perpetrators. That makes it challenging to manage access to and traffic around the scene.

For instance, an Orlando Police Department report on the Pulse nightclub attack cited the need for improved communication and coordination between the police and fire departments responding to the incident. While such problems do not always affect how many lives are saved, they can slow down the overall response.

Even when well-coordinated, those not trained in post-disaster casualty triage can unintentionally cause problems. They might transfer patients to hospitals that lack the resources needed to treat them, or transfer them in vehicles that lack critical life-support equipment, such as IVs or oxygen.

Preparing for the Next Attack

Our recent research looked at three mass-casualty incidents in the U.S. between 2013 and 2015, examining both the health care system and community responses.

First, we must provide co-training for medical and nonmedical first responders. Police and firefighters are already starting to be trained in basic lifesaving skills in non-mass-casualty incident contexts. In some communities, such as Atlanta and Irvine, California, police patrols carry automated electronic defibrillator devices as well as Narcan to reverse opioid overdose. Other police departments, such as in Denver, provide staff training in tourniquet application. These efforts should be continued.

Both medical and nonmedical responders should be trained in scene safety, bystander management, field triage and medical techniques.

Moreover, both medical and nonmedical responders should be trained in scene safety, bystander management, field triage and medical techniques such as effective application of tourniquets. Even many medical professionals lack sufficient training in these skills.

Second, we need to ensure open communication lines. A dedicated radio frequency can facilitate communication among the various responder disciplines, as well as guard against problems caused by cell tower outages. Also, responders can be trained to rely, when necessary, on text messaging, which worked when voice communication did not during the events we studied.

Third, interdisciplinary disaster drills are critical. Communities should conduct regular citywide disaster drills that include EMS, fire and police departments, as well as area hospitals and health care systems. Responders need to test their training and protocols under conditions that simulate some of the complexity and stress of real events. This could include adding components without notice, to simulate the sudden onset of terrorist events.

Such drills will help each group understand how its actions contribute to an integrated multidisciplinary response. They can also promote more effective collaboration during response to an incident.

Finally, we need to build relationships in advance that can be leveraged during emergencies. Our research indicates that one of the most important ingredients of an effective multidisciplinary medical response is strong relationships and trust among key players. Regular exercises and drills can help, but they need to be supported by leaders and organizational cultures.

For example, in recent years, with support from the federal government, many communities across the U.S. have created health care coalitions that provide formal mechanisms — including regular multi-stakeholder meetings and agreements to share critical resources — for coordinating the preparedness and response efforts of first responders, health care providers and private sector partners.

Moreover, given the frequent role of bystanders, professional responders should reach out to community emergency response teams and other organizations. That can help raise citizen awareness of basic lifesaving techniques.

Effective medical response to terrorism and disasters requires sustained investment. That can be difficult to muster in an era marked by increasing skepticism about public investment and distrust in public institutions.

However, experience suggests that we need collaboration among medical and nonmedical response organizations — and civilians. Through supporting public investments in mass-casualty incident preparedness and response, both policymakers and civilians should have the confidence that, even when attacks cannot be prevented, their communities are resilient enough to respond to and recover from them.

Mahshid Abir is an assistant professor, emergency medicine, at the University of Michigan and an adjunct physician policy researcher at the nonprofit, nonpartisan RAND Corporation. Christopher Nelson is a senior political scientist at RAND and a professor of policy analysis at Pardee RAND Graduate School.

This commentary originally appeared on The Conversation on July 9, 2017. Commentary gives RAND researchers a platform to convey insights based on their professional expertise and often on their peer-reviewed research and analysis.